Behaviour change company Greenredeem has called on the Department for Environment, Food and Rural Affairs (Defra) to reconsider its plans to roll out a deposit return scheme (DRS) for single-use beverage containers and invest instead in convenient recycling solutions that create ‘sustained behaviour change’.

Pointing to results of a year-long trial of a closed-loop recycling model, carried out across 25 schools in Windsor and Maidenhead between January and December 2019, Greenredeem questions the effectiveness of a DRS – which sees a redeemable deposit incorporated into the price of a drinks container – to increase recycling rates and achieve real behaviour change. 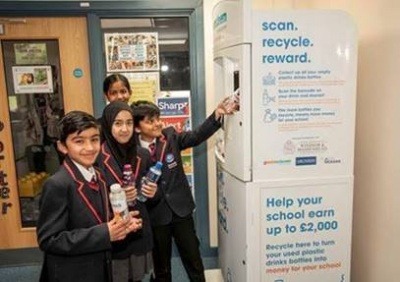 The UK Government has committed to introducing a DRS for plastic, glass and metal beverage containers in England, with Wales and Northern Ireland to follow suit, by 2023, subject to further consultations. Scotland, which recently saw DRS regulations voted into law, will also be introducing its DRS in 2023, after having to push back from 2022 due to the Covid-19 pandemic.

Greenredeem’s pilot, the results of which are detailed in ‘Money back for our empties – the recycling solution for our plastic bottles?’, saw pupils at the trial schools scan and deposit plastic bottles at an interactive kiosk, which gave them access to educational videos, images and facts about recycling and the environment. This was supplemented by lesson plans designed by Plastic Oceans UK on the responsible consumption and disposal of plastics.

For every bottle deposited, five pence was earned for the school, which was then spent on further educational initiatives. The scanning of bottles also allowed for analysis of the brands and the types of bottles recycled.

According to the results of the scheme, 12,000 pupils recycled nearly 160,000 plastic bottles sourced from school, homes, events and litter picks, which were then collected and used to create new plastic bottles.

Parent surveys also demonstrated the improved understanding of plastics recycling, with awareness of plastic pollution growing from 88 per cent to 93 per cent and 62 per cent of respondents claiming to recycle all plastic bottles when not at home, up from 56 per cent. The fact that recycling plastic bottles earned money for schools was also a plus, with 75 per cent saying it motivated them to recycle more.

Greenredeem reinforces its concerns citing a report from the Institute of Economic Affairs (IEA), which claims that a DRS would be a “very expensive way of achieving very little”, with set up costs estimated to come in at £1 billion and annual operating costs close to £814 million. The IEA report also underlines that the UK already has a comparatively high recycling rate for containers targeted by a DRS at the kerbside, repeating local authority concerns that a DRS would result in lost revenues from kerbside collections of plastic bottles.

Matthew Ball, Managing Director of Greenredeem, said: “In the UK, three billion plastic bottles are thrown away, littered or never recycled every year. There is a clear need for the government and the industry – from manufacturer to retailer, collector to processor – to find long term solutions. But DRS alone are not the answer. We must invest in convenient solutions that create sustained behaviour change by linking recycling with education, good causes and people’s priorities.”

“The flexible model we piloted provides a readily available and scalable solution which benefits everyone involved. The kiosk is a focal point and conduit for recycling that could be rolled out in other ways across the UK – including through an app – to ensure the cost-effective capture of plastic bottles. We look forward to discussing the outcomes of this pilot with Defra as it consults on England’s future waste and recycling strategy. Although the financial reward helped to drive action, the educational initiatives ensured a deeper connection to the cause, helping these behaviours to become sustained. If government backs this kind of long-term model, we can make a significant improvement to plastic bottle recycling in the UK.”

You can download Greenredeem’s ‘Money back for our empties – the recycling solution for our plastic bottles?’ report on the company’s website.