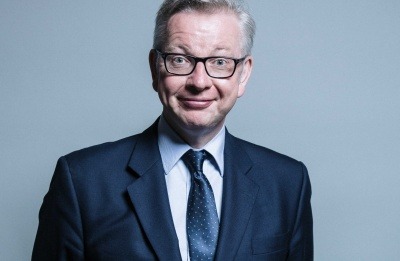 At Kew Gardens in London yesterday (16 July), Gove spoke of a political, economic and moral “need to act” to protect the environment, stating: “Time is running out to make the difference we need; to repair the damage we as a species have done to the planet we have plundered.”

He continued: “We cannot leave this planet to the next generation more polluted, more dangerous, denuded of its natural riches and increasingly inhospitable to all life.”

As well as issuing stark warnings about climate change and the degradation of the natural world, Gove discussed a number of specific policy proposals and developments, setting out some of his ambitions for the government’s new Environment Bill, which is now set for introduction in 2020 (the draft Bill was published in December 2018). He pledged that the proposed Office for Environmental Protection, to act as an environmental enforcement body after Brexit, would have “real teeth”, with the power to take government to court.

On waste and resources, he confirmed his commitment to reforming the producer responsibility system so that packaging producers are forced to pay the full net cost of collecting and managing their waste packaging.

‘The greatest possible incentive to recycle’

Gove also announced that he would be pushing for an ‘all-in’ DRS model, which would see a small charge added to the cost of a wide range of drinks containers – much like the Scottish Government's recently announced DRS proposal, which would cover all containers above 50 millilitres and up to three litres in size made from aluminium and steel, glass or PET plastic. To encourage recycling, the deposit will be able to be recouped when returning the container to a collection point. Gove said the ‘all-in’ model would “give consumers the greatest possible incentive to recycle.”

A wide range of containers, including cans, glass and plastic could be accepted in the DRS
Image: Flickr / MrTinDC
The DRS proposal was one of many to come out of the government’s Resources and Waste Strategy, published in December 2018. A consultation looking at the proposal in more detail was concluded in May and the responses have yet to be published, but opinion from across the waste and recycling sector remains mixed. Local authorities have long expressed concern about the potential for a DRS to leach revenue from councils, if the materials accepted in the DRS are the same as those that are already widely accepted in kerbside recycling systems.

As such, many groups, including the Local Authority Recycling Advisory Committee (LARAC), prefer an ‘on-the-go’ DRS – one that would accept those items more commonly purchased and consumed outside of the household, which aren’t generally captured by household recycling, such as disposable coffee cups.

A number of businesses have also suggested that a DRS should be a last resort measure to boost recycling if other reforms – more consistent collections across the UK, mandatory food waste services for English households and the introduction of extended producer responsibility (EPR) for packaging producers – did not produce the desired results.

While deposit schemes in other European countries have helped to boost recycling rates, these have not been overlaid onto a pre-existing kerbside collection scheme as comprehensive as in the UK, something that would certainly create added complications.

Jacob Hayler, Executive Director of the Environmental Services Association (ESA), expressed surprise that Gove had made such a “decisive conclusion” on the scope of the proposed DRS, given that “much of the detail of the new producer responsibility scheme has yet to be developed and agreed.”

Hayler welcomed Gove’s commitment to a full net cost EPR regime, but stated: “It is important that interactions between a DRS and a new producer responsibility scheme are fully analysed to ensure that all parts of the system work together to achieve the best environmental outcomes.

“And of course all this must be underpinned by a strong Environment Bill that sets a clear long-term direction of travel and the governance structures to hold everyone to account. We look forward to reading the full Environment Bill to ensure it does just that.”

Phil Piddington, ESA Chair and Managing Director of waste management company Viridor, added: "We are pleased to hear Mr Gove say he wishes to work with business to make deposit return schemes as effective as possible. It is crucial that we match policy and ambition and investment, ensuring the recycling material which may be currently escaping the net is captured, put back in the economy, kept out of our seas and off our beaches.”

With Prime Minister Theresa May soon to leave office, it is possible that Gove will not remain in his post as Environment Secretary if May’s successor decides Cabinet is in need of a shakeup. As such, it is as yet uncertain whether the Defra’s commitment to these pledges will remain if Gove leaves his post.

Industry says DRS must form part of wider waste strategy
By
Kate Dickinson
| 29 April 2018 |
Add a Comment
The announcement this morning (28 March) of plans to introduce a deposit return scheme for drinks containers in England has been hailed as a victory by plastics pollution campaigners, though many within the waste and resources industry have called for caution regarding implementation.

Coffey dismisses local authority concerns regarding ‘all-in’ DRS
By
Rob Cole
| 18 July 2019 |
Add a Comment
Resources Minister Therese Coffey said that there was “no threat to the sustainability of kerbside collections” from a deposit return scheme as she backed an ‘all-in’ model at an evidence session of Parliament’s Environment, Food and Rural Affairs Committee.

Pandora's bottle: Would a bottle DRS be a game-changer or merely cause more problems?
By
Cecil Goodbody
| 17 November 2017 |
Add a Comment
We've been talking about the possibility of introducing bottle deposit return schemes in the UK for years now, but with Scotland forging ahead, it seems that England might well follow. Cecil Goodbody talks to deposit advocates and opponents.

The Environmental Services Association (ESA) has expressed concerns over a lack of permitting capacity at the Environment Agency (EA) in response to Prime Minister Boris Johnson’s announcement of a significant infrastructure investment in the wake of the Covid-19 pandemic.

The arc21 residual waste project is an ‘essential’ part of Northern Ireland’s waste management plans, according to a report by consultancy Grant Thornton.

Government ministers have criticised ‘excessively tight’ restrictions at HWRCs following their re-opening in a letter to local authorities, sparking disappointment over the letter’s ‘tone’ from local authority associations.

Northern Ireland’s Department of Agriculture, Environment and Rural Affairs (DAERA) has launched a consultation on the future of recycling in the country as it seeks to reach a 65 per cent recycling rate by 2035.

Enforcement undertakings accepted by the Environment Agency (EA) for breaches of environmental regulations have totalled £1.65 million for the past six months.

Global e-waste increases by 21 per cent in five years

Global E-Waste Monitor 2020 has revealed a sharp rise in waste electrical and electronic waste, which is predominantly dumped or burned.

Minister for Trade, Investment and Innovation says clarity on infrastructure investment is vital in Scotland’s commitment to green leadership

Recycle Week 2020 will be celebrating the UK’s commitment to recycling during Covid-19 lockdown, says Recycle Now.

A round-up of news from the waste and resources industry, including Ecosurety, Renewi, Carbios, SUEZ and the BMRA.

A report released by WWF and the Waste and Resources Action Programme (WRAP)  yesterday (1 July) outlines the measures that need to be taken within the EU to halve food waste by 2030, in accordance with the UN’s Sustainable Development Goal (SDG) 13.1.