Resources Minister Therese Coffey backed Secretary of State Michael Gove’s desire to move to an ‘all-in’ deposit return scheme (DRS) and has dismissed concerns from local authorities that a DRS would ‘cannibalise’ the kerbside system.

Coffey’s comments came yesterday (17 July) during the final session of an inquiry into plastic food and drink packaging by Parliament’s Environment, Food and Rural Affairs (EFRA) Committee. The inquiry has been looking at government proposals in the Resources and Waste Strategy on extended producer responsibility (EPR), DRS, consistency of household collections and a tax on recycled content in plastic packaging, and asking whether these would achieve the desired improvements in packaging sustainability. 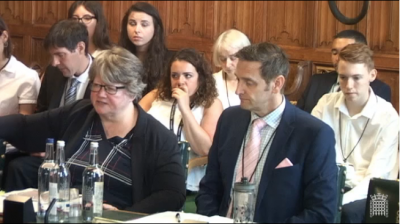 Resources Minister Therese Coffey (left) and Defra's Chris Preston give evidence to the Efra Committee.
Image: Parliament.tv
On DRS, Coffey said she “didn’t think there was a threat to the sustainability of the kerbside system” from an ‘all-in’ DRS for drinks containers. This scheme would see a deposit added on top of the original price of almost all drinks containers, which would be redeemable upon return of the container to a collection point. Secretary of State Michael Gove gave his backing to an ‘all-in’ system at a speech at Kew Gardens on Tuesday (16 July).

Local authorities fear that by introducing an ‘all-in’ DRS, valuable materials that are already collected at the kerbside by local authorities and then sold on to markets would be diverted away from the kerbside and into the DRS, thus depriving councils of revenue. However, Coffey said that the extra money made available to councils through a full cost recovery EPR system for packaging will offset any lost revenue from materials such as PET plastic.

In an earlier session, Peter Fleming, leader of Sevenoaks District Council and representative of the Local Government Association, questioned the need for a DRS that dealt with all drinks containers when 99 per cent of councils collect plastic and glass bottles and aluminum and steel cans at the kerbside.

Dan Roberts, Vice Chair of the Local Authority Recycling Advisory Committee (LARAC) feared that a DRS would “cannibalise” kerbside systems for little gain, citing modelling carried out by his South Staffordshire council that found a DRS would remove 29 per cent of the council's recycling yield by weight, but would only reduce residual waste arisings by two per cent.

When questioned whether it wouldn’t be better to implement an ‘on-the-go’ DRS that only targeted items not collected at the kerbside, such as coffee cups, Coffey stated that an ‘all-in’ system provided “straightforwardness” for consumers in the knowledge that all containers would have a deposit placed on them as opposed to only certain items.

Coffey was also forced to defend the Green Dot symbol on packaging from claims by the EFRA Committee that it was misleading consumers. Coffey reminded MPs that the symbol, which indicates where a company has made a financial contribution to recycling, does not claim to suggest a product is recyclable after EFRA Committee Chair Neil Parish MP called the symbol "fraudulent" and "misleading" to consumers.

Making it simple for consumers

Consumer confusion over the labelling of packaging and what can and can’t be recycled was also a point of discussion during the two sessions of the EFRA Committee’s inquiry held yesterday.

Chris Preston, Deputy Director of Waste and Recycling at the Department for Environment, Food and Rural Affairs (Defra), stated that the government was looking to implement a national labelling standard to clearly inform consumers about whether packaging can or cannot be recycled anywhere in England. Coffey added that this would not be introduced until household recycling consistency changes had been implemented.

In the day’s earlier session, contributors had reiterated that consistency must be preceded by other changes, including greater design for recyclability by manufacturers, as well as increased domestic reprocessing infrastructure and demand for recyclable materials, to ensure it is viable for councils and waste management companies to collect these materials and meet recycling targets.

Jacob Hayler, Executive Director of the Environmental Services (ESA), which represents the UK’s waste management sector, summarised the difficulties for local authorities and waste management companies: “We are in the middle and have no control over our supply chain. We need producers to be designing products for recyclability or we won’t be able to hit future recycling targets and we need consumers to put the right stuff in the right bin, we need much clearer and consistent messaging and national labelling so people know what to do and take the confusion out of it.”

Roberts added: “Local authorities can provide consistent services if the material throughput is consistent and if the end markets are consistent. But we can’t work miracles in the middle.”

Those giving evidence were adamant that while materials collected should be consistent, there had to be flexibility to allow local authorities to collect these materials in a way that is viable for the nature of their area, taking into account demographics, housing stock, rurality and other factors. As such, a standard collection system for each local authority would not be appropriate.

Concerns about confusion were emphasised when those called to give evidence were posed questions over compostable and biodegradable packaging. Richard Kirkman, Chief Technology and Innovation Officer at Veolia UK and Ireland, stated that it was often very difficult for consumers and operators to tell the difference between a compostable plastic product and a conventional plastic product, suggesting that compostable plastics could be placed into the conventional plastic stream and cause contamination without clear labelling.

Coffey said that the government was approaching the issue of compostable and biodegradable plastics with “caution” and that work had been carried out with the department for Business, Energy and Industrial Strategy (BEIS) to develop a Biodegradable and Bioplastic Strategy, with a call for evidence set to be launched later this year.

Coffey also suggested that the proposed tax on plastic packaging with less than 30 per cent recycled content would apply to imported pre-filled food and drink packaging after it was initially proposed that such packaging would be exempt.

She stated that the Treasury, which proposed and consulted on the tax, had had it “pointed out to them that there are many products that come into this country that would not be covered” and added, somewhat wryly, that “the responses to the consultation had been very informative and don’t be surprised if there is a response to that coming up”.

‘All-in’ deposit return scheme has Gove’s support
By
Kate Dickinson
| 17 July 2019 |
Add a Comment
Environment Secretary Michael Gove has put his weight behind an ‘all-in’ DRS for drinks containers as part of a speech on the need to act on climate change, pollution and natural degradation.

Autumn Statement: Plastics tax to be introduced from April 2022
By
Rob Cole
| 30 October 2018 |
Add a Comment
A tax will be placed on the manufacture and import of plastic packaging containing less than 30 per cent recycled plastic, the Treasury’s Autumn Statement has revealed, though a coffee cup levy will not be introduced.

The Malaysian Government has announced that it has returned 150 shipping containers of illegally imported plastic waste to their countries of origin, including the UK.

Cardiff residents that persistently place non-recyclable items in recycling containers face the prospect of a fine and prosecution if they do not heed warnings from Cardiff Council to recycle properly as part of the council’s bid to reduce contamination and increase the city’s recycling rate.

The Environment Agency’s packaging producer responsibility monitoring plan 2020 has dropped its planned number of site inspections of accredited operators to 110 from 160 in 2019.

The government has released a wide-ranging briefing paper on plastic waste ahead of the return of the Environment Bill, expected at the end of the month.

The Welsh Government has published its new circular economy strategy, setting out the progress needed to reach zero waste, carbon neutrality and a 100 per cent recycling rate by 2050.

Switching the UK’s diesel-powered refuse collection vehicles (RCVs) for electric trucks could reduce greenhouse gas emissions by 290,000 tonnes of CO2 each year, according to a new report from Eunomia Research and Consulting.

LifestyleGarden to release furniture made from marine plastic waste

Tesco has announced that it will be replacing its plastic-wrapped multipacks of tinned food with permanent multibuys to reduce plastic waste, removing 350 tonnes of plastic from its products.