With three billion people in the world lacking access to decent waste management services, WasteAid UK is sharing skills so communities can tackle the waste crisis themselves. Head of Communications Zoë Lenkiewicz explains

“One of our founding principles is that we respond to need”, explains WasteAid UK's Director Mike Webster. “Even before we were registered as a charity, WasteAid was approached by international non-governmental organisation Concern Universal (now rebranded as United Purpose) because of concerns about the levels of solid waste being openly dumped in the Gambia. They were also looking for opportunities to reduce the unemployment rate among young people and women.”

In partnership with the local council, Concern Universal and Women’s Initiative Gambia (WIG), WasteAid UK’s first mission, therefore, was to undertake an assessment visit to Brikama, a market town in the west of the country. “We found large amounts of dumped waste, a lack of decent disposal facilities, and a completely overwhelmed municipality in terms of collection capacity”, reports Webster, who was named in the top 10 of Resource's Hot 100 poll this year.

It was here that WasteAid UK developed the concept of a waste livelihoods centre. The organisation was offered funding by the European Union to initiate the project and set about transforming the waste landscape in Brikama.

“The situation across sub-Saharan Africa is almost entirely one of poorly-managed waste, so we are in the somewhat odd situation of knowing that there will be need for intervention in some form or other wherever we go”, suggests Webster. “But our major challenge is generally finding a strong local partner and in WIG we had a well-run, strong organisation with a long history of successful delivery of projects.”

Importantly, WasteAid UK also partnered with the local Brikama municipality, which provided land for the training centre in return for help in addressing the area’s waste challenges. The first of these was the huge inward migration into the municipality due to increasing urbanisation and economic activity in the coastal areas. Out of a national population of 1.8 million, almost 40 per cent (700,000) now lived in the Brikama municipality and the municipality’s resources were completely inadequate to deal with this significant increase in demand on services.

Indeed, the annual per capita budget is equal to approximately £0.07. Moreover, since the country is extremely poor (gross domestic product, a measure of income, is under US$500 per head, as compared to over US$40,000 in the UK), waste remains a low political priority.

Webster continues: “The council had around a dozen tractors and trailers to deliver a service, and they weren’t all working. We surveyed the area and found only about 10 per cent of the area had a regular waste collection – these tended to be the high-visibility areas such as markets and shopping streets, places that would not be physically accessible without regular waste collections.”

But lack of funding and sparsity of service were not the only obstacles the project had to overcome. There is a saying that waste data is either terrible or non-existent, and this was certainly true in the Gambia. Data and research on waste characterisation, service coverage, et cetera, was very poor, meaning the project would need to start from scratch.

Finally, the allocated disposal site for what waste was collected was a former sand quarry, without even the most basic remediation measures. The site was situated adjacent to farmland and impacted on the water quality of a reported 15 boreholes in the nearby area.

WasteAid UK spent several months running the country’s first ever full-scale waste composition analysis to provide robust data for waste management interventions, as well as holding focus groups and community meetings to understand attitudes towards waste, and gaining understanding of the governance of waste, since it is vital to ensure that any intervention fits with existing legislation.

The research identified key materials in the waste stream that had the greatest environmental impact and the greatest potential for diversion. WasteAid UK also established the potential end markets and opportunities for recycled goods, and discovered what materials people were interested in working with.

The project partners concluded that a livelihood approach to diverting waste – helping individuals and groups set up waste reprocessing businesses – would be most effective. This would create value chains for materials (making them worth something) and encourage individuals to segregate materials at source. This had already been witnessed with some materials, for instance metals and PET bottles that have ready secondary markets. Webster explains the logic: “[After conducting robust research], we consider how we can work with local partners to set up schemes that will last. Ensuring ongoing cost recovery for our projects is the major challenge – you can set up a scheme, provide equipment and build a reprocessing site, but how will it cover its costs in the long term?”

They decided that the key materials to focus on would be various types of organic waste (due to the large volume in the waste stream, the sizeable potential market for biofuels and agricultural uses, and the significant environmental and public health impact from lack of collection), and low-grade film plastics (again, these were prolific in the waste stream, and had a big environmental and health impact by blocking drains, choking livestock and causing pollution when burned).

The municipality offered a piece of wasteland for the project, conveniently situated opposite the market in Brikama. The team developed four workstations:

These techniques alone had the potential to divert around 60 per cent of the residual municipal waste stream.

WasteAid UK’s achievements in the Gambia

The centre’s impact is ongoing and continues to grow. As of November 2016, the training centre has seen 212 people graduate, and a further 26 community recycling centres have been created in neighbouring towns and villages. Overall, this is expected to have impacted on the lives of 94,000 people, demonstrating what good value for money waste training is.

WasteAid UK has also demonstrated that there is a strong interest from African community organisations to improve waste management practices and set up recycling enterprises. National governments and the international community can have a significant impact on public health by investing in low-cost waste management techniques. 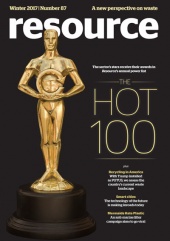 Since completing the development of the site and handing it over to the Women’s Initiative Gambia at the end of last year, the WasteAid UK team has been extremely busy, with partners in Ghana, Kenya, Nigeria and Cameroon, as well as plans for developing a new site in Somaliland shortly.

WasteAid UK is an independent charity, which was set up by waste management professionals to deliver practical and low- cost waste services in developing countries. It delivered its first project in the Gambia in 2015.

The Gambia is a small country with a population of 1.9 million in West Africa, entirely surrounded by Senegal. It obtained its independence from the UK in 1965, and its economy is currently dominated by farming, fishing and tourism. The UN Development Programme’s 2010 ‘Human Development Report’ put the Gambia at 151 out of 169 countries for its Human Development Index.

750 deaths in 7 months prompt calls for an end to open dumpsites
By
Edward Perchard
| 21 September 2016 |
Add a Comment
ISWA has published a roadmap for closing the world’s biggest dumpsites, a ‘global health emergency’ accounting for around 40 per cent of the world’s waste and presenting severe health risks to the four billion people that use them.

WasteAid UK wins award for Gambia work
By
Edward Perchard
| 8 June 2016 |
Add a Comment
WasteAid UK, a charity helping to establish waste management processes in developing countries, has won a National Energy Globe Award for its work in The Gambia.

Waste to wealth
By Resource |
11 February 2016 |
Add a Comment
Pictures from Living Earth Foundation's pan-African Waste to Wealth project, which ran from 2010-2015

Recycling charity WasteAid is set to establish a new recycling centre in Kenya after being awarded a grant from UK Aid Direct, the government fund for projects working towards poverty reduction.

At least 115 people have been killed by a landslide at a landfill site in the Ethiopian capital Addis Ababa, with dozens more still missing.