The issue of food waste looms large over a society quick to throw away or ignore edible food that has past a sometimes-arbitrary date, be it sell-by or best-before – an especially pertinent point given the record numbers of people in the UK using food banks. 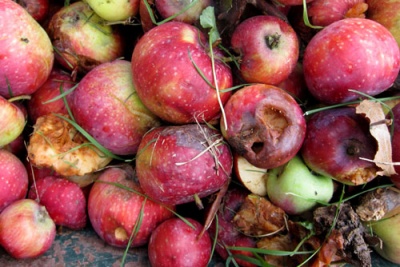 These are astounding figures in a country where last year the Trussell Trust, which runs a network of over 400 food banks across the UK, reported handing out over 1.1 million three-day emergency food supplies in 2015/16, up from 25,000 in 2008/09.

In light of this situation, many app developers are creating new ways of connecting people to food that would otherwise go to waste, aiming to reduce the amount of avoidable food waste created.

Too Good To Go

Too Good To Go links customers to restaurants with excess food and allows them to order the surplus food at a discounted price – between £2 and £3.80 a meal. So far, according to the app’s website, over 13,000 meals have been saved and 27 tonnes of CO2 emissions have been avoided.

The app shows how many surplus portions restaurants have available and when they can be picked up
The app was founded in Denmark at the end of 2015 by Chris Wilson and Jamie Crummie and has since grown internationally and is now available in six countries, including the UK where it was launched in June 2016 in Leeds and Brighton and has since been rolled out to Birmingham, Manchester, and London.

App users are shown information on participating restaurants, what food is available, when they can pick it up, and the price. They can then decide what they want and can collect the food at the restaurant at a designated time. The food is served in biodegradable ‘Too Good To Go’ boxes made of sugarcane.

While Too Good To Go helps restaurants cut back on food waste costs, founder Chris Wilson sees the app as being able to help fight food poverty, and to that end, users may also ‘pay it forward’, donating funds to provide meals to those in need.

Wilson says: “Food waste is high on the agenda of environmental and social issues right now and especially so in big cities where apparent affluence can mask deep deprivation.

“Naturally, cities produce a lot of waste and essentially we’re looking to redistribute that and make a dent on the food waste epidemic that has become more and more prevalent in recent years – it’s not just about providing cheap food.” 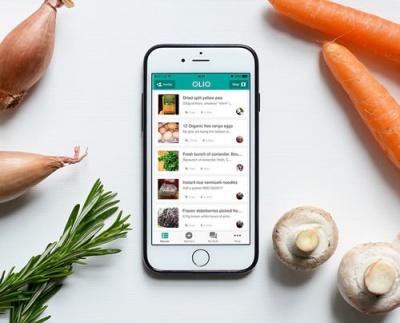 Photo: Annabel Staff
Launched in January 2016, OLIO says it has has successfully prevented 100,000 food items from being sent to landfill, having been used more than 300,000 times since its establishment. Its expansion has been rapid and it is now operating in 38 countries including across Europe, and in the USA, South Africa and Australia. It has also expanded to household goods redistribution as well as food.

The app is simple to use, with users uploading a picture of their unwanted item and nearby neighbours and other users can receive alerts for new items. Recipients can then arrange to collect the item from a home, an OLIO drop box or another location.

OLIO’s founders envisaged the app as not only saving users money and reducing waste, but also allowing them to ‘experience the magic of rescuing something of value and interacting with a neighbour’.

With the waste created by large retailers causing both environmental and commercial issues, several apps and social networks have been developed to facilitate the redistribution of unused supermarket food to charities and community groups.

Neighbourly is a social platform that connects local community projects with companies, and has recently launched Neighbourly Food, which aims to ease the logistical problems of redistributing unwanted food.

Businesses upload what’s available, where it can be collected and its expiry date, and the charities and food banks can then claim what they need and publicise their own requirements. The app also helps businesses with logistics to ease the collection and reporting of food re-distribution data.

Marks & Spencer has been using the network since October 2015, and in June announced that the link had helped it reduce its stores’ food waste by nine per cent in 2015/16.

Another platform which is aiming to link charities with surplus food is Tesco’s new Community Food Connection initiative, which uses food redistribution social enterprise FoodCloud and is delivered in tandem with charity FareShare.

Photo: FoodCloud
The app, which was rolled out in select Tesco stores across the country in 2016 and hopes to be present in all Tesco stores by the end of 2017, allows Tesco store managers to alert charities and community groups to how much surplus food they have at the end of each day. Charities can then say if they want the food and pick it up for free.

While Tesco threw away nearly 55,400 tonnes of food in 2015, of which 30,000 was still edible, Tesco says that the Community Food Connection initiative has provided over 1 million meals to over 3,000 charities across the UK.

Of course, the best way to save resources is to not create a surplus in the first place. Sometimes, however, it can be difficult to track how much food you are throwing away, and the Winnow app aims to make it a lot easier to see how much food you are wasting, thereby allowing users to see where they can make savings. 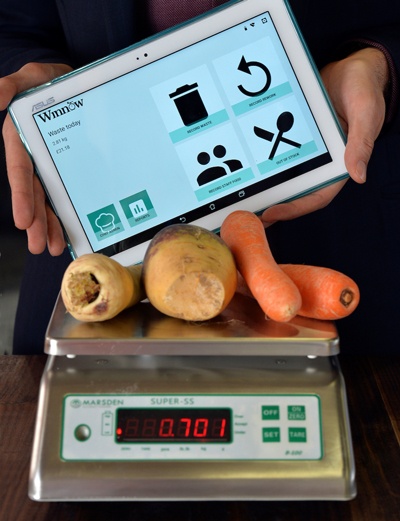 The Winnow app aims to help families weigh and calculate the value of their food waste
Photo: Sainsbury's
Originally designed by Marc Zornes and Kevin Duffy to tackle the problem of food waste in commercial kitchens, which can waste up to 20 per cent of the food they purchase, the app has now been adapted for domestic use.

The app allows users to track and weigh the food items that they are throwing away as well as logging their reasons for doing so (e.g. burnt during cooking, bought too much, out of date). The app then compiles a report detailing the financial cost of the waste produced over a certain period and how that could be cut down.

To date, Winnow’s developers say it has helped make a total of £2,500,000 in savings for users, prevented the equivalent of over one million wasted meals, and saved 2,700 tonnes of CO2.

Sainsbury’s has made use of the app in its Waste less, Save more campaign, testing it in a domestic setting for the first time at six households in Swadlincote, with results suggesting that food waste dropped by 68 per cent for those households that used it, meaning it could potentially save families an average of £268 a year.

More recently, five British politicians, including Environmental Audit Committee Chair Mary Creagh MP, have signed up to test out the app in their homes.

NoFoodWasted is an app developed in the Netherlands by August de Vocht that allows shoppers to view discounted food items, such as meat and fish, in nearby shops before they pass their ‘best-before’ date, as well as receive notifications on their phones when items on their personal shopping list are discounted.

Photo: NoFoodWasted
The app doesn’t just limit itself to fresh produce, meat and fish, but also connects shoppers to canned or packaged items by sending a push message from a beacon attached to the bottom of store shelves to NoFoodWasted users’ phones, alerting them to items nearing their ‘best-before’ date.

Launched in September 2014, the app is now used by 20,000 people daily and has expanded from 11 supermarkets to 175, with plans to expand into Germany, Belgium and the UK.

With all these tools available at the press of a download button, there is now surely no excuse for wasting food!

New app hoping to revolutionise restaurants’ treatment of surplus food that is Too Good To Go
By
Edward Perchard
| 8 August 2016 |
Add a Comment
A new app is hoping to address the 600,000 tonnes of food waste created by UK restaurants every year while providing discounted meals to those in need.

UK’s first food waste supermarket opens in Leeds
By
Edward Perchard
| 22 September 2016 |
Add a Comment
A new ‘pay-what-you-feel’ food surplus supermarket in Yorkshire is providing the public with the chance to grab unsold food from retailers and suppliers and prevent much-needed supplies from disappearing into the bin.

Politicians to weigh up their own food waste
By
Edward Perchard
| 6 December 2016 |
Add a Comment
EAC Chair Mary Creagh and four other politicians are to test the Winnow food waste smart meter in their homes as part of the ongoing Sainsbury’s Waste less, Save more initiative.

Food waste campaigners call for transparency to hold supermarkets to account
By
Elena Holmes
| 16 November 2016 |
Add a Comment
Speaking to the Environment, Food and Rural Affairs Committee, Hugh Fearnley-Whittingstall and Tristram Stuart have called for supermarkets to provide greater transparency on their food waste.

The UK’s food waste data, setting out how much food is consumed, recycled and wasted across the country, has been restated by WRAP using new international standards of measurement, resulting in a reduction in the figure for overall household food waste.

Gordon Ramsay is among a number of Michelin-starred chefs set to repurpose food waste at a new popup restaurant in Selfridges next month.

The UK has reduced the amount of food waste going to landfill by almost two million tonnes since 2013, says a new report from ReFood, but big challenges remain before we can reach zero waste.

20,000 tonnes of fly ash will be treated at the facility per year, the company announced

The document, containing 300 recommendations, questions a ‘heavy reliance’ on EfW

Price the main motivator for use of reusable packaging schemes, Hubbub finds