Photo: Too Good To Go
A new mobile app is hoping to address the ‘food waste epidemic’ growing in the cities of the UK.

For every meal eaten in restaurants in Britain, around half a kilogramme of food is wasted through preparation, spoilage and what diners have left uneaten on their plate, equating to about 600,000 tonnes of restaurant-based food waste every year.

Figures like that, published by the Sustainable Restaurant Association (SRA), coupled with the fact that the number of people using food banks in the UK has risen to record levels (over 1.1 million emergency food packages were given away by the Trussell Trust in 2015/16), have led to the development of the new takeaway app that seeks to ensure that as much edible surplus restaurant food as possible is saved.

The ‘Too Good To Go’ app comes to London this month, having already launched in Birmingham, Brighton, Manchester and Leeds. It acts as a link between restaurants with excess food and customers, who can place orders and collect it at a discounted price – between £2 and £3.80 per meal.

Users are given information on the participating restaurants, portions available, collection windows and the price, and can place orders and collect the food at a designated pick-up time. Restaurants that sign up to the scheme are even given biodegradable ‘Too Good To Go’ boxes made from sugarcane to serve the food in.

According to the founders of the Too Good To Eat social enterprise, Chris Wilson and Jamie Crummie, each plate of wasted food costs restaurants an average of 97 pence, a cost they can make back and then some using the app.

Wilson said: “Food waste is high on the agenda of environmental and social issues right now and especially so in big cities where apparent affluence can mask deep deprivation.

“Naturally, cities produce a lot of waste and essentially we’re looking to redistribute that and make a dent on the food waste epidemic that has become more and more prevalent in recent years – it’s not just about providing cheap food.”

Photo: Too Good To Go
Brighton was the first city to use the app, and since 1 June over 600 meals have been saved from going to landfill. In preparation for its expansion into London at the end of August, 95 restaurants have already signed up, ranging from smaller establishments in areas including Covent Garden, Spitalfields and Soho to chains like Jimmy’s World Buffet and El Vaquero.

The app can be downloaded for free from Apple and Android stores and can also be used online. As well as purchasing discounted food for themselves, users can also donate meals to those in need. 1,167 meals have been donated so far.

Wilson added: “We’re extremely excited to be launching in London after a great first few months starting off elsewhere.

“600,000 tonnes of food is wasted by restaurants each year, whilst it is estimated that one-third of all the food produced worldwide doesn’t even make it as far as a plate. When you think about the impact of such waste on the environment, as well as the fact that over one million UK residents were in receipt of emergency food parcels last year, it just doesn’t make sense for so much edible produce to be thrown away.”

The use of mobile apps and social networks to redistribute surplus supermarket produce has become more and more prevalent in recent months as retailers search for ways to more effectively deal with their waste.

In March, Tesco began a nationwide rollout of its Community Food Connection scheme, which uses an app developed by social enterprise FoodCloud to allow store managers to alert local charities and community groups about the surplus food they have in stock at the end of each day.

Over a six-month trial in 14 stores last year, Tesco says the scheme saved 22 tonnes of food and provided an estimated 50,000 meals for charities and community groups. All 800 of its large stores will now run the scheme by the end of 2016, with all stores covered by the end of 2017. 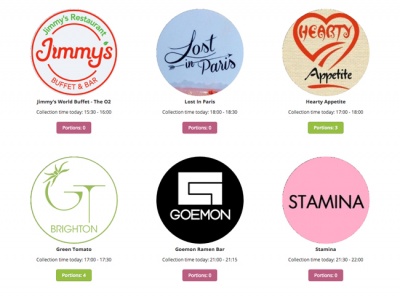 The app shows how many surplus portions restaurants have available and when they can be picked up
A similar link-up between Marks & Spencer and social network neighbourly, launched in October 2015, has so far donated almost 300 tonnes of surplus food to local groups. The initiative has resulted in food being donated to 500 charities, such as food banks and community cafes, and has helped the company achieve a reduction of food waste equivalent to nine per cent per 1,000 square foot of food selling space.

The Too Good To Go app aims to bring these social and environmental savings to the hospitality industry, where food being wasted is estimated by the Waste & Resources Action Programme (WRAP) to cost around £3 billion per year.

In 2012, WRAP established the Hospitality and Food Service Agreement (HaFSA), a voluntary agreement that saw businesses in the industry take on a target of reducing the amount of food and associated packaging waste arising by five per cent by the end of 2015. WRAP estimated at the time of launch that if 25 per cent of the UK’s food service industry signed up to the agreement, they would save £76 million in disposal and supply costs by 2015.

At the end of last year, WRAP announced that signatories had achieved a reduction in CO2-equivalent (CO2e) emissions of 3.6 per cent in 2014, with final results due this year.

More information about the Too Good To Go app can be found on its website.

Tesco begins rollout of national food waste scheme
By
Hannah Boxall
| 14 March 2016 |
Add a Comment
Tesco has announced that it is to introduce a nationwide initiative intended to dramatically reduce the amount of its food that goes to waste.

The UK’s food waste data, setting out how much food is consumed, recycled and wasted across the country, has been restated by WRAP using new international standards of measurement, resulting in a reduction in the figure for overall household food waste.

Gordon Ramsay is among a number of Michelin-starred chefs set to repurpose food waste at a new popup restaurant in Selfridges next month.

The UK has reduced the amount of food waste going to landfill by almost two million tonnes since 2013, says a new report from ReFood, but big challenges remain before we can reach zero waste.

Is biostabilisation the solution for Scotland’s Municipal Waste Landfill Ban?

What do EU plastic and packaging reforms mean for the industry?