Celebrity chef Gordon Ramsay is teaming up with other Michelin-starred chefs to open a popup restaurant serving dishes made from food waste at Selfridges in London next month.

UK households wasted 7.3 million tonnes of food last year, 4.4 million tonnes of which was avoidable, according to the Waste & Resources Action Programme (WRAP), and the new popup aims to highlight the problem. 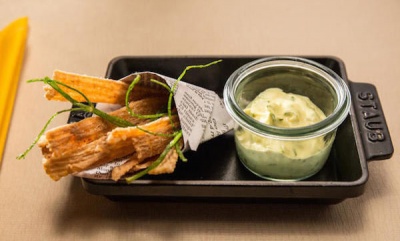 Fried skate wing cartilage was among the dishes served at WastED New York.
Photo: wastED
The rooftop of the department store on Oxford Street is to be the location for the restaurant, called wastED London (the capitalised bit stands for ‘education’), which will join forces with local farmers, fishermen, suppliers and retailers to use by-products from every stage of the food chain.

wastED will be open from 24 February to 2 April, serving menus designed to raise awareness about food waste that will include sharing dishes, an à la carte menu and a take on high tea.

The project is the brainchild of US environmental chef Dan Barber of New York’s Blue Hill at Stone Barns, based at the Stone Barns Center for Food and Agriculture. The chef became famous worldwide after his participation in Netflix’s Chef’s Table series and his book on the sustainability of food, The Third Plate.

Barber is a leading figure in the farm-to-table cooking movement, where chefs work with local producers to promote sustainable agriculture, and in March 2015, he transformed his restaurant in Greenwich Village into wastED New York, a popup that served dishes made from food waste for three months.

Focusing on overlooked by-products of the US food system, the New York popup offered daily specials at US$15 a plate based on ingredients from local farmers, featuring dishes such as ‘dumpster dive vegetable salad’, ‘broken razor clams with a pig’s ear vinaigrette’, and ‘pock-marked potatoes’. Over the course of the three months and 10,000 dishes, the team made use of 600 pounds (lb) of ‘ugly’ veg, 475lb of skate cartilage, 350lb of vegetable pulp and 900lb of waste-fed pigs. 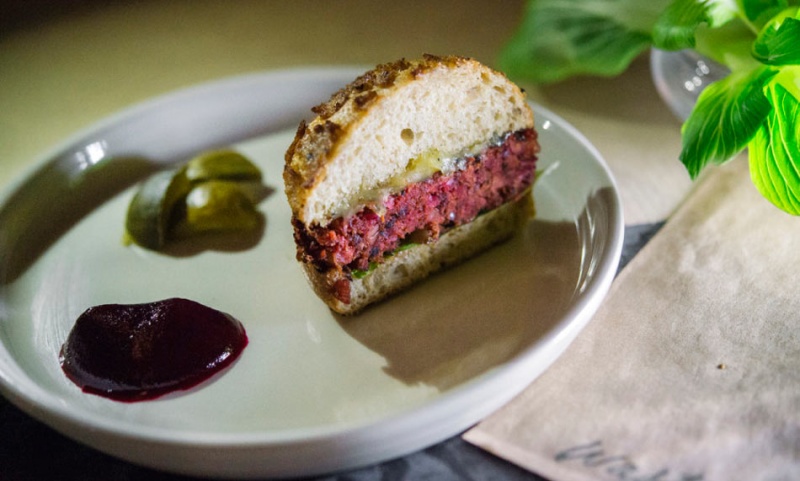 An example of the process of creating the dishes comes in the form of the burger above, served at wastED New York. The restaurant explained: “wastED’s interpretation of a burger, made from the pulp left over from a cold pressed juice operation. (The facility where we get the pulp goes through one ton of veggie pulp every production day.) The bun is a collaboration with Balthazar Bakery — they made a special “wastED” bun that incorporates a mash made from stale rye bread and a “Tiger” or “Dutch” topping made with rye bread crumbs. Topped with ReConsider cheese, a rogue cheese from Consider Bardwell Farm, created (unintentionally) when wild propionic bacteria — the same kind that give Swiss cheese its holes — get a little more active than planned. The resulting cheese is milder and sweeter than the Pawlet they were aiming for, but still delicious. Served with pickled cucumber butts — the ends and offcuts discarded by the processor to allow for uniform pickle slices and ketchup made from reject beets that would otherwise be composted.”

Talking to Bloomberg, Barber suggested our expectations from restaurants need to change: “I am in favour of expanding the definition of what is waste food. We get to choose what’s for dinner when really we need a pattern of eating that supports a landscape.”

He added: “What we are doing is a new way of looking at farming – eating the entirety of the farm in the same way that we have nose-to-tail eating of the animal that you all in England exported to the rest of the world. What I like about London is the openness to these ideas. The culture around food waste is fantastic – way ahead of America’s.”

The UK version of the popup, according to wastED’s website, will have a ‘uniquely British accent’, with the likes of bubble and squeak, traditionally made to use up roast dinner leftovers, gracing the menu. All dishes, which will be fairly small and intended for sharing, will be priced at £15.

wastED London will work with British and European farmers, fishermen, producers, butchers and suppliers to create a British menu of waste-based dishes, with celebrated chefs also contributing their own waste-based dishes to the menu. These will include Brits Tom Kerridge, the only chef to hold two Michelin stars at a pub, and Clare Smyth.

The restaurant will draw ‘inspiration from the UK’s already-vibrant food waste movement’ and will ‘showcase ingredients-in-the-rough from local producers and purveyors across the food industry, and even riff on a few British classics’.

Six apps taking the fight to food waste
By
Rob Cole
| 5 January 2017 |
Add a Comment
A number of apps have placed food waste in their sights and are offering the public, retailers and restaurants a range of solutions to the problem.

WRAP calls for all to ‘unite in the food waste fight’
By
Elena Holmes
| 10 January 2017 |
Add a Comment
WRAP is calling for a united effort after it found that £13 billion of edible food was wasted by UK households in 2015, a situation Friends of the Earth calls ‘the definition of a scandal’.