Get involved in this year's Great British Beach Clean

The Marine Conservation Society (MCS) has released a call for volunteers to help out at the UK’s biggest beach cleaning event, the Great British Beach Clean.

The nationwide event, which also incorporates the Great Channel Islands Beach Clean and the Great Northern Irish Beach Clean, will take place over the weekend of 15-18 September and engages hundreds of volunteers coordinated by the MCS in cleaning UK beaches (a list of this year’s beach clean events can be found on the MCS website) and recording what litter has been found on them. 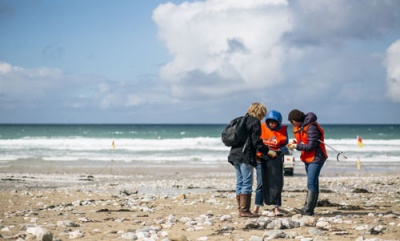 Waitrose, which is funding MCS’ beach clean programme throughout the year, will sponsor the event this year. The MCS aims to organise 1,000 beach and river cleans between now and June 2018 in England alone.

Marine plastic pollution is a blight that has gained more and more attention in recent years with new Environment Secretary Michael Gove announcing a ban on polluting plastic microbeads in cosmetic products by 2018, and the contribution of beach pollution coming under the spotlight, with over 80 per cent of the estimated 12.2 million tonnes of plastic entering the oceans every year coming from land-based sources.

Beach pollution has seen a steady rise in recent years, increasing every year for the last 23 years since MCS began recording it. In 2016, some 6,000 volunteers took part in cleaning up over 360 beaches, picking up 268,384 individual pieces of litter in the process.

Despite the good news last year that the number of single-use plastic bags found on Britain’s beaches during the event had halved between 2015 and 2016, largely due to the introduction of the 5p single-use plastic bag charge, there was a 50 per cent rise in the amount of balloon related litter and a four per cent increase in drinks container caps and lids collected on beaches during the same period. Tiny bits of plastic and polystyrene were the most common litter items found in 2016.

Snapshot of the future

Speaking about the event and the need for volunteers, MCS Beach and River Clean Project Officer Lizzie Prior said: “Taking part in the Great British Beach Clean really can make a difference. In previous years when we’ve highlighted increases in dog poo bags and sewage related debris found on beaches we’ve seen drops in numbers subsequently.

“It’s because of the massive increase in wet wipes we found between 2013 and 2015 that we were able to launch our ‘Wet Wipes Turn Nasty When You Flush Them’ campaign, which has resulted in improvements in labelling, removal of plastic from 'flushable' wet wipes in retailers own brands, and shown high street heavyweights the need for their flushable wipes to pass water industry standard.

“Plastic drinks bottles have consistently been in the Top 10 of items found on UK beaches and that’s why we’re pushing for deposit return schemes in all parts of the UK.

“Beach litter is a serious environmental problem, but the solution is in our hands. We want the ‘Great British Beach Clean’ weekend to offer a snapshot of what the future could look like for the British seaside by reducing the amount of litter that reaches our shores – so the more volunteers we have, the clearer that picture will be.”

Great British Beach Clean 2016: We will fight marine pollution on the beaches
By
Sam Mason-Jones
| 15 September 2016 |
Add a Comment
The Great British Beach Clean, an initiative introduced by the Marine Conservation Society, will take place this weekend as thousands of volunteers head to the seaside to clean it up through the removal of litter – potentially sustaining a soggy bottom or two along the way.

Mediterranean expedition embarks on study of 'marine plastisphere'
By
Edward Perchard
| 23 June 2017 |
Add a Comment
A two-month expedition to study the ‘plastisphere’ of the Mediterranean Sea departed from the coast of Italy on Thursday, as scientists seek to study how the alarming formation of a plastic-based marine ecosystem will affect the sea and humans.

The government’s new Litter Strategy for England has been widely well-received, though some concerns about funding, the role of EPR and implications on waste management have been voiced.