The government’s new Litter Strategy for England has been welcomed by members of the waste and packaging industry, though the Environmental Services Association (ESA) says that it has missed an opportunity to increase the role of extender producer responsibility (EPR) schemes.

Among the measures proposed to create an ‘anti-litter culture’ are fines of up to £150 for litterers, the prevention of councils from charging householders for disposal of DIY household waste at household waste recycling centres and a national anti-litter campaign next year.

Education of next generation ‘vital’

The strategy sets out a goal of creating a ‘green generation’ by educating children to lead the fight against litter through an increased number of Eco-Schools – a programme created by national anti-litter charity Keep Britain Tidy -- and boosting participation in national clean-up days like the Great British Beach Clean.

Keep Britain Tidy welcomed the launch of the Litter Strategy, in particular the identification of education as a key part of establishing behavior-change.

Commenting on the strategy, the charity’s Chief Executive Allison Ogden-Newton said: “Educating the next generation is vital if we are to win the war on litter. Our children and young people are the key to making littering a thing of the past. Learning about litter and its impacts, as part of their wider environmental education, must be a central pillar of the concerted effort needed to tackle the problem once and for all.”

The Eco-Schools programme improves pupils’ skills and environmental awareness
Keep Britain Tidy has also welcomed the government’s pledge to introduce regulations that will allow local authorities to issue penalty charge notices to the registered owner of a vehicle if litter is thrown from it, which it says will make it easier for local authorities to tackle the costly problem of roadside litter.

Ogden-Newton added: “There is much to commend in this strategy and we look forward to seeing some ambitious targets from the government and effective monitoring to ensure that the strategy makes the measurable difference we all want to see.”

The broad range of actions included in the strategy has been welcomed by the Chartered Institution of Wastes Management (CIWM), which says that the spread of initiatives will tackle the ‘negative economic, environmental and social impact’ of litter on English communities.

CIWM Chief Executive Colin Church commented: “It is not an easy problem to solve, and the strategy rightly focuses on exploring and developing both voluntary and regulatory measures that could apply to a range of stakeholders. It acknowledges the challenge of providing the right infrastructure to make it easy for people to do the right thing – disposing of their litter properly and ‘recycling on the go’ – and the role of major high street retailers and brands in promoting behaviour change.

“We are also pleased to see a commitment to strengthening the enforcement powers against offenders. Clear messages about the potential consequences of littering are an important deterrent and have been seen to have a positive impact in other countries.

“The strategy makes repeated reference to the need for enforcement to be appropriate and proportionate and CIWM agrees with this; although it should be noted that most local authorities see the use of the toughest measures very much as a last resort.”

Church notes, however, that more investigation is needed into how other waste management services impact on the amount and makeup of litter and fly-tipping. The strategy includes a proposal to stop councils from charging for the disposal of DIY waste at household waste recycling centres, and Church states that an ‘ongoing discussion’ is needed to prevent local authorities from taking on costs that should be the responsibility of contractors.

He said: “Changes to the law must not provide loopholes that allow commercial operators to avoid their waste Duty of Care and legal responsibilities.” 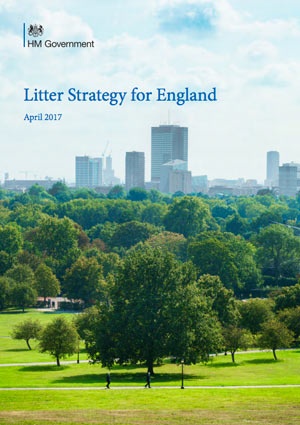 Church also sounded a word of warning about a number of other proposals in the strategy, saying: “Funding all the work proposed in the strategy will also be challenging and CIWM has concerns about the proposal to reduce the ring fencing of income from fixed penalty fines for environmental offences. With priority areas such as social care taking ever larger proportions of the council budget, it is important that money can be earmarked for the effective enforcement, the infrastructure, and the communications initiatives highlighted in this strategy.”

The unclear method of funding is also a concern for the ESA, which also believes that producers of the items most frequently littered should be given more responsibility over its clean-up, an opportunity it says was missed by the strategy.

Executive Director Jacob Hayler said: “We think the strategy has missed an opportunity to highlight in more detail the important role that extended producer responsibility schemes could play.

“ESA’s Policy Paper published last year ‘The Role of Extended Producer Responsibility in Tackling Litter in the UK’ highlighted that transferring the cost of preventing and clearing up the some of the most littered items in the UK such as cigarettes and chewing gum alone could save Local Authorities in the region of £300 million each year in clean up costs.

“Introducing producer responsibility levies on the manufacturers of some of these most frequently littered items would free up resources for to cover both enforcement and litter clean up costs as well as to fund anti litter campaigns.”

Brands in the gutter

Packaging trade association INCPEN says it hopes that the strategy will ‘create a sense of community and civic pride’, with many good local initiatives so far not being able to shift behaviour due in part to a lack of government leadership.

With the backing of the government, however, the organisation believes a more lasting national effect can be achieved. INCPEN Director Jane Bickerstaffe said: “Bottles, cans and wrappers don’t litter themselves but it’s a bad advertisement for a brand to have its name literally in the gutter. That’s why INCPEN supports comprehensive anti-litter campaigns, commissions research and encourages the use of anti-litter messages.”

As part of the strategy, a newly-formed expert group will look at a number of topics, including the advantages and disadvantages of a deposits return scheme for plastic bottles, an intervention that was recently backed in Scotland by one of INCPEN’s members, Coca-Cola European Partners.

Commenting on the Litter Strategy for England, a spokesperson for the company said: “We agree that much more needs to be done to tackle anti-social littering behaviours and we welcome the new approach outlined by Defra in this far-reaching strategy.

“All of us – consumers, local authorities, government and business – have a role to play in improving our environment. Therefore, we are pleased to have been invited to join Defra’s new expert group to provide advice to the Government on issues such as how best to increase the recovery of plastic drinks containers and reduce littering in the process. We look forward to working with other like-minded organisations to explore new ideas and approaches that will support the overall ambitions of this strategy.”

More information on the government’s Litter Strategy for England can be found in Resource’s news story.

Removal of HWRC charges among government’s litter strategy proposals
By
Rob Cole
| 10 April 2017 |
Add a Comment
Litterers could be fined up to £150 and councils stopped from charging householders for disposing DIY household waste at recycling centres as part of the government’s new and long-anticipated litter strategy for England.

EPR high on industry wish list after UK recycling fall
By
Rob Cole
| 16 December 2016 |
Add a Comment
Members of the waste industry are calling for greater producer responsibility and signs of a clear direction for recycling policy in England, after the UK’s recycling rate fell for the first time.

If approved by the CMA, Macquarie will own 100 per cent of SUEZ UK’s share capital