Fourteen people were fatally injured in the waste and recycling industry in 2016/17, according to provisional statistics released by the Health and Safety Executive (HSE), a figure more than doubled from last year’s six deaths.

Five of the fourteen deaths last year occurred at Hawkeswood Metal Recycling’s plant in Birmingham last July
Photo: West Midlands Fire Service
In its annual report of fatal accidents occurring in the work place, the HSE, Britain’s national regulator for workplace health and safety, highlighted that despite being a relatively small sector in terms of employment, the annual average fatal injury rate over the last five years is around '15 times as high' as the all-industry rate.

The waste industry also has one of the highest rates of work-related illness, exceeded only by the health and social work, agriculture and public administration industries.

One of Britain’s most dangerous sectors

Five of the fourteen deaths last year occurred at Hawkeswood Metal Recycling’s plant in Birmingham last July, where a partitioning wall collapsed covering the workers in tonnes of scrap metal and concrete. One other man was injured in the incident, but was able to escape from the rubble with a broken leg.

This incident was highlighted by the HSE, with Chair Martin Temple stating: “As we approach the one-year anniversary of this incident, our thoughts remain with the families of those who died. We continue to fully support West Midlands Police’s investigation.”

Also in Birmingham was the death at the Cardboard 4 Cash site, where a worker was killed in an incident involving industrial equipment. Another employee was arrested on suspicion of manslaughter. In December, meanwhile, two men died at a food waste recycling plant in Leicestershire after a teenage worker fell into a tanker of slurry and his colleague attempted to save him.

Alongside the industry-wide figures, the HSE also revealed that last year 92 members of the public were fatally injured in accidents relating to work, including a number of deaths involving waste vehicles.

During the month of April 2016 alone, three members of the public were killed after being hit by a waste vehicle. These included Moira McKeeman, who was hit by a collection vehicle in Edinburgh, a 70 year old man from Otley whose car collided with a bin lorry, and 57 year old pedestrian who was hit by a Bywaters refuse lorry in Brent, North London.

Across all sectors, 137 people were killed at work, which is a slight decrease from 144 in 2015/16. However, the rate of work-related deaths in Britain has reduced by over 50 per cent in the last two decades, and is now amongst the lowest rates in Europe.

A more detailed assessment, which will be released in November, will provide a clearer picture of trends and more health and safety statistics from across the waste industry. 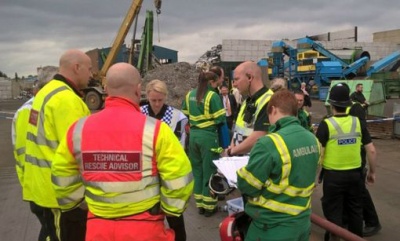 Photo: West Midlands Fire Service
“Every fatality is a tragic event that should not happen”

Commenting on the general figures, Temple added: “Every fatality is a tragic event that should not happen. While we are encouraged by this improvement on the previous year, we continue unwaveringly on our mission to prevent injury, death and ill health by protecting people and reducing risks.

“We deal daily with the causes and consequences of work-related deaths, injuries and ill health. Today’s updated figures continue to inform our understanding of which areas we need to target.

“We concentrate our interventions where we know we can have the biggest impact. We hold dutyholders accountable for managing the risks they create in the workplace. This benefits workers, business performance, the economy and wider society alike.”

Last month, following two ‘horrific’ deaths in the waste industry, at Baldwin’s Skip Hire in Norfolk and Bywater’s in East London, the HSE sent out a note to members of the industry reminding them of guidance regarding the safe use of moving machinery.

Deaths in the waste sector fell last year, but it is still amongst the most dangerous in Britain
By
Jennifer McDowall
| 12 July 2016 |
Add a Comment
Statistics published today reveal that the waste and recycling sector has one of the highest rates of worker fatalities, despite Britain being one of the safest places to work overall.

Firefighters have been working for three days to tackle two separate blazes involving recycled waste – one of which has been confirmed by police as arson.

A large fire containing 2,000 tonnes of waste broke out at Siteserv in the Vale of Glamorgan last night, the third major waste fire of the week and the third at this particular site in four years.

Veolia and Croydon Council fined after worker crushed by RCV

Croydon Borough Council and Veolia have been jointly fined £350,000 after a worker suffered ‘life-changing injuries’ after being crushed by a refuse collection vehicle.

A Lancashire-based plastics recycler has been fined after a worker’s arm was crushed by a conveyor belt.