“Waste is the new narcotics”, the Chief Executive of the Environment Agency (EA) has said, as the environmental regulator reported that nearly 1,000 illegal waste sites were closed down last year.

The statement came as the EA published a report detailing the waste industry’s environmental performance, creation of pollution and illegal waste.

And though the Environmental Services Agency (ESA) has said that the agency’s focus on waste crime is beginning to show a ‘return on investment’, the EA’s chief Sir James Bevan told the Guardian that the quick, community-damaging profits being made by waste criminals “feels… like drugs felt in the 1980s”.

He explained: “The system hadn’t quite woken up to the enormity of what was going on and was racing to catch up… We are clear now about the damage waste crime does to communities and to the economy.

“The strategy is to work with the good guys and really nail the bad guys. We are both finding more [illegal sites] and nailing more. As the statistics show, we haven’t cracked it yet and it will be a long grind, but we are making progress.”

According to the ESA, which is running a year-long campaign aiming to make businesses more aware of their obligations to handle waste responsibly, waste crime diverts up to £1 billion from legitimate businesses and the Treasury each year. Last year, the EA was given an extra £4.2 million to address the issue, focusing on tackling illegal waste sites, illegal waste exports, poorly performing sites and those who misdescribe waste to evade taxation.

It also estimates that illegal exports of waste electrical and electronic equipment (WEEE) and household waste fell by 17 per cent between 2014 and 2016 with a net benefit to the UK economy of £2.75 million.

As part of efforts to combat waste crime, magistrates have been encouraged to impose harsher sentences, and in the last few weeks, a repeat offender was sentenced to 30 weeks in prison after illegally depositing waste in a small plot of land in Hampshire, leading to a number of fires that caused damage to adjacent units, while a West Sussex-based waste criminal who was caught at Heathrow whilst fleeing prosecution from the EA was given a 12-month sentence and fined £3,000 after illegally stockpiling 1,200 tonnes of waste wood.

Bevan told the Guardian: “[Waste crime] attracts criminals because you can make a lot of money. The business model is very simple: you lease or find a bit of land, you then go and offer to remove skip loads of waste for a customer, which you dump on the land. All your money is made up front, in cash, and then you disappear.”

‘Not the time to take the foot off the gas’

Responding to the report, the ESA’s Head of Regulation, Sam Corp, said that the organisation is pleased with the investment on tackling waste crime, much of which has come out of the Landfill Communities Fund, but that the extent of the action required shows what a large problem illegal sites still pose to communities and the environment across the country. 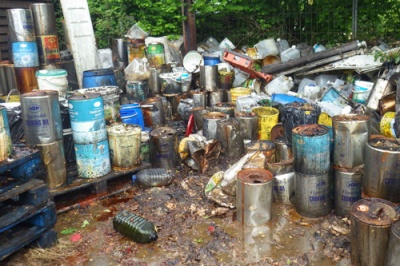 In July a Dorset waste operator was given a suspended jail sentence and a £20,000 fine after running a decade-long illegal waste oil storage and processing plant
Photo: Environment Agency
He said: “We are particularly encouraged that the EA seems to be closing illegal sites down more quickly than previously, which can only help to minimise the misery caused by such sites to local communities and the financial impact on legitimate operators.

“However, the fact that nearly 1,000 new illegal sites are being found year on year shows the sheer scale of the problem and it is clear that now is not the time to take the foot off the gas. Tackling waste crime must remain a priority for government and regulators as it does for ESA and its members.”

Harvey Bradshaw, Executive Director for Environment and Business at the EA, said: “The EA will continue to take swift action to protect the environment, raise standards of poor performers and use new techniques to disrupt illegal activity.

"We urge businesses to do even more; in some sectors pollution is still having an impact on our air, land and water, and the EA will continue to work with industry groups to encourage good practice.

“This report highlights some significant improvements in the environmental performance of regulated businesses – which directly benefits people, the environment and the economy. Over the longer term, these trends have been significant, and will provide a lasting legacy to the environment, as well as real financial savings to businesses.”

The Environment Agency’s report into the waste industry can be downloaded from its website.

Waste criminal captured and jailed after going on the run
By
Jennifer McDowall
| 23 August 2016 |
Add a Comment
A West Sussex-based waste criminal has been sentenced to 12 months in jail and fined £3,000 in costs after ignoring notices served by the Environmental Agency and fleeing prosecution.

CIWM begins ‘Fighting Waste Crime’
By
Edward Perchard
| 6 January 2016 |
Add a Comment
The Chartered Institution of Wastes Management has launched a year-long campaign against waste crime by announcing that it will be contributing almost £50,000 to an initiative raising business awareness of the Duty of Care.

Twice in a lifetime: repeat waste criminal jailed for dump at Talking Heads music venue
By
Sam Mason-Jones
| 15 September 2016 |
Add a Comment
A waste boss from Southampton has been imprisoned for a series of illegal waste disposal crimes, with the sentencing coming five years after a previous conviction.

A 49-year old man, who had previously worked in the waste industry, was fined £840 and ordered to pay prosecution costs of £2,000

The Environment Agency is to review the cost of its permits and business charges after launching a public consultation.

Householders could face £400 fine for fly-tipping

A new fixed penalty notice has come into force for householders who don’t use a licensed waste carrier and whose waste ends up being fly-tipped.