Wales’ recycling rate for the 12 months leading up to March 2017 has reached 64 per cent, up four per cent on the figure reported in March 2016 and achieving its target for 2020 three years early. 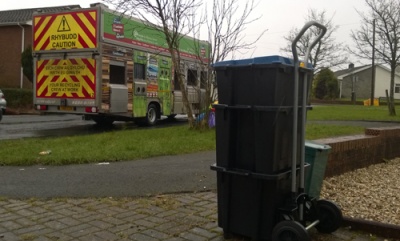 The provisional figures, published by the Welsh Government yesterday (24 August) constitute considerable progress towards the country’s goal of reaching a recycling, reuse and composting target of 70 per cent by 2025, with rates improving across the whole country. Only one council out of 22 failed to meet the government’s 58 per cent target set out for 2015-16.

The Cabinet Secretary for Environment and Rural Affairs, Lesley Griffiths welcomed the publication of the data. She said: “These latest recycling figures make for extremely satisfying reading. They reveal the waste we are generating is decreasing while the amount we recycle continues to rise.

“We should be extremely proud of our recycling performance here in Wales. This is an area where we lead the way in the UK and indeed just two countries in the whole world recycle now more than we do.

“We are always looking at how we can continue to improve. Only last week I announced I intend to consult on plans to halve food waste by 2025. I am confident this is achievable thanks to the continued efforts of Local Authorities and householders’ commitment to recycling. Today’s figures prove they clearly share our ambition for Wales to become a zero waste nation by 2050”.

Of the 22 Welsh authorities, only one saw their rolling recycling rate fall from the previous Welsh Government release, with Bridgend falling one percent to 58 per cent. This was reflected in the quarterly figures, with the authority seeing a six per cent drop from 66 per cent to 60 per cent for the January-March 2017 period.

Ceredigion once again managed to maintain the highest recycling rate in the country, with a reported 70 per cent rate for the 12 months leading up to March. However, it saw a slight decrease of one per cent on its results for January-March in 2016, down from 72 per cent to 71 per cent for the same period in 2017.

As was the case at the end of last year, Blaenau Gwent retains the lowest rate, recording a 57 per cent recycling rate in the months leading up to March 2017, the only council yet to have passed the Welsh Government’s 58 per cent target for 2015/16. This however, is an impressive eight per cent increase on the previous year. The authority also registered a sizeable 12 per cent increase for Jan-March 2017, up to 60 per cent from 49 per cent for the same quarter in 2016. It is thought that the increase is due to the success of the area’s updated kerbside sort recycling system, introduced in 2015. Another notable increase comes from the Flintshire authority, which upped its rolling rate by ten per cent.

The top three recycling rates (for the 12 months prior to March 2017) are:

The bottom three recycling rates are:

Residual waste generated per person fell from 48 kilograms per person down from 50 kilograms across Wales, with Swansea and the Isle of Anglesey registering reductions of 21 per cent and 17 per cent respectively.

Following the release of the Welsh government’s statistics for 2016, a report by Resource and Eunomia Research & Consulting calculated that were it regarded as a separate country, Wales would have the second best reported recycling rate in Europe behind Germany (66.1 per cent), and hold third place globally behind Germany and Taiwan.

These latest results, published yesterday (24 August), would see Wales retain its place with the second highest rates in Europe, but continue to gain ground on Germany.

Solution found to Blaenau Gwent recycling issues
By
Edward Perchard
| 26 December 2015 |
Add a Comment
Blaenau Gwent County Borough Council is to reintroduce rear-lane recycling collections to 19 areas from January, after protests about the implementation of a new waste collection system.

Welsh Collections Blueprint still presents best option
By
Edward Perchard
| 22 March 2016 |
Add a Comment
An independent review of the Welsh Government’s guidance on waste and recycling collections has found it is still the best model for Welsh local authorities to follow.

In an open letter, the group warns that the crisis could ‘ultimately impact the consumer’

Leader of the pack

The minister acknowledged the ‘challenges’ prices have caused, but said Defra ‘cannot intervene’

Plans to include fuels made from non-renewable materials in the EU’s renewable energy plans could undermine recycling progress, according to a new policy briefing by Zero Waste Europe, Bellona Europe and Rethink Plastic.

The Trades Union Congress has supported an emergency motion condemning Birmingham City Council’s decision to go back on an Acas-brokered deal with Unite following the resignation of council leader John Clancy over his handling of the bin dispute.