Written by Ellie Jackson and illustrated by Liz Oldmeadow and Laura Callwood, the books encourage children between three and eight years old to take action and help prevent plastic from getting to the sea.

The two books, Duffy’s Lucky Escape and Marli’s Tangled Tale, tell the story of Duffy, a turtle, and Marli, a puffin, who mistake the plastics and balloons they find in their habitat for food and become ill before being rescued and nursed back to health.

The stories and illustrations aim to educate children sensitively on the need to consider where their rubbish ends up. The books include fun facts about wildlife but also encourage them and their families to do their bit by recycling as much as they can at home, taking part in beach cleans and reporting injured wildlife to charities and vets, along with spreading the word about the threat to wildlife.

‘Children take the lessons they learn home with them’

Emma Wood, Acting Education Centre Officer at Viridor Trident Park, commented: “When the schools visit our centre we focus our message on reminding the children what can be recycled so local families make the most of recycling opportunities.  Our message is clear, we ask everyone to put the right waste in the right bin.

“The children then also see how a purpose is found for the waste which cannot be recycled and how this transformed into renewable energy. These education visits are really important because we know the children take the lessons they learn home with them and, through pester power, influence how their homes recycle rubbish.

“The books we are sponsoring are part of reinforcing this message and it’s lovely that the children will learn more about puffins and turtles at the same time. Encouraging an interest in nature, the world around us and our impact on it is so important.”

Across the UK children and teachers are using the books as inspiration to take action – organising beach cleans, writing to government and local businesses asking them to consider their use of single-use plastics, setting up recycling schemes and working towards becoming Eco-Schools. 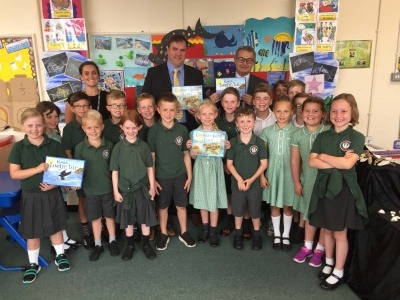 Jackson has also encouraged the wider Cardiff community to support the children’s efforts by making small changes in their own lives such as refusing single use plastics like takeaway containers or disposable coffee mugs which can collectively make a significant difference.

Duffy’s Lucky Escape has also been translated into Welsh – Dihangfa Lwcus Duffy. Jackson commented that because marine pollution is a worldwide problem she had hoped the books would be translated into as many different languages as possible in order to share the message widely, but had no idea that Welsh would be the first one.

Jackson said: “When Marten Lewis from The Darwin Centre in Pembrokeshire offered to get the books translated into Welsh I was really excited – here is a book which the children can access in the language of their culture which makes the message of the book even more powerful. Thanks to The Darwin Centre’s inspiration and ideas, I am now getting the book translated into many other languages including Swahili through their links to turtle charities in Kenya.”

Cabinet Member for Clean Streets, Recycling and Environment, Councillor Michael Michael added: “I think that books like these are an excellent way of getting the message across about the global problem of ocean plastics. As a council we recognise that single-use plastics can create unnecessary waste with negative impacts on our communities and environment.

“Within the UK’s top 10 core cities Cardiff has the best record for recycling, but when it comes to plastics reuse is always preferable to recycling or disposal, as it requires less energy and creates less waste. That’s why we will continue to work with partners such as ‘No Straw Stand’ to help promote the desire to move away from single-use plastics.”

More information about the books and the real-world issues behind the stories can be found at the Duffy the Sea Turtle’s website.

A two-month expedition to study the ‘plastisphere’ of the Mediterranean Sea departed from the coast of Italy on Thursday, as scientists seek to study how the alarming formation of a plastic-based marine ecosystem will affect the sea and humans.

20,000 tonnes of fly ash will be treated at the facility per year, the company announced

The document, containing 300 recommendations, questions a ‘heavy reliance’ on EfW

Price the main motivator for use of reusable packaging schemes, Hubbub finds