Photo: Mario Roberto Duran Ortiz / Creative Commons
The 2016 Rio Olympics are upon us, and with 10,500 athletes competing and half a million foreign tourists expected to flood the city, it is a welcome opportunity for national celebration and international unity. To bring that point home, this year we will also be cheering on a team of 10 refugees competing for a chance for a spot on the podium.

Yet behind the glamour and excitement of the games lies the significant and persistent issue of waste management and sustainability, with much of the lead-up to the games focusing on the polluted, waste-littered waterways that will host several events. 17,000 tonnes of waste are expected to be generated during the two weeks, with 6,000 tonnes of food consumed, 23.5 million litres of fuel used and 29.5 gigawatts of energy expended. So what has the Brazilian city done to create a sustainable legacy for the Olympics?

Well, for a start, the Rio 2016 medals have been designed to celebrate nature and sustainability. The gold medals use gold that has been extracted without the use of mercury and in accordance with strict sustainability criteria. The silver and bronze medals are made up of 30 per cent recycled materials and half of the plastic used in the medals’ ribbon straps has come from recycled plastic bottles.

Furthermore, the podiums on which victorious Olympic athletes will stand have been made from organic materials and designed in a way that that they can be used as furniture once their life as an Olympic podium is over.

With the London 2012 Olympics claiming to be the ‘greenest Olympics ever’ by its organising committee (more on which shortly) the Rio games have a standard to meet.

The organising committee for the Rio Olympics has come up with a range of strategies to ensure their own sustainable legacy, including:

A key element of sustainability is obviously waste management and the committee has provided details – if rather limited – on their proposed actions to reduce waste before, during and after the games.

The committee has developed a sequence that it intends to follow from the preparatory stages, through the games themselves, all the way to the final stages when venues are dismantled. The sequence is as follows:

Little detail is given regarding the particular strategies of waste reduction and management that will be followed during the games, though it is proposed that a programme allowing for income generation through recycling will be followed and organic waste will be composted in order to reduce the amount of waste going to landfill.

The committee has also reported that during the planning stages it analysed the lifecycle of more than 100 materials used in the creation of a ‘visual identity’ for the Olympics in order to reduce environmental impact and increase recycling.

Prior to the games, in April 2013, a guide to sustainable packaging was also published, giving sustainability options and mandatory requirements for Olympic products and goods in terms of labelling, ecodesign, accessibility of information and packaging materials.

Waste in the water

A significant concern being voiced in the run up to the Olympics has been the huge levels of waste that are polluting the waters that Olympic athletes will be expected to compete in.

The homes of around a third of the 10 million residents in Rio’s greater metropolitan area do not have access to a sewage system, and only around half of the city’s waste undergoes any treatment before being dumped in the marine environment.

Waterways polluted with untreated sewage and other waste have long been problematic for the city, with pledges made in 2007 to construct seven waste treatment plants in time for the games. There is in fact only one plant that is fully operational, meaning that Rio de Janeiro has fallen grossly short of its promise. 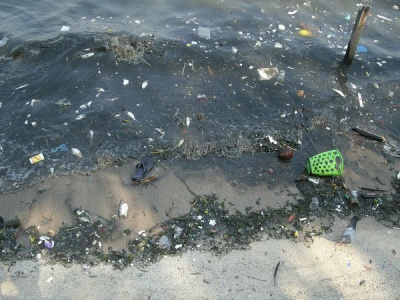 Last year, parts of Guanabara Bay were designated as 'not recommended for human contact' due to contamination from dog urine and food waste
Photo: Agencia Brasil Flickr Creative Commons; Gloverbr2008, Flickr.
The public water company CEDAE claims to have invested more than £500 million on tripling sewage treatment in the Guanabara Bay, the area hosting aquatic events, but despite this, over half the residents are still not covered by the sewage system.

As time has run out to invest in further infrastructure to deal with the problem in time for the games, the World Health Organisation has said: ‘It is suggested that all athletes should cover cuts and grazes with waterproof plasters prior to exposure, try to avoid swallowing the water, wash/shower as soon as possible after exposure and, as far as possible, minimise their time in the water and avoid going in the water after heavy rainfall if possible.’

Maria Neira, the WHO’s Director of Public Health and Environment, has said that the risk of illness has been minimised “as far as possible”, telling the Guardian: “If there is a risk, it will be for mild intestinal problems leading to diarrhoea. The athletes will be healthy, so for them the risk may be less than for normal populations.” While Neira has attempted to downplay the risk posed to the competitors, for athletes that have spent years training and preparing for this moment, even mild illness could ruin their chances of success.

Holding up the sustainability promise

While Rio de Janeiro has struggled to uphold its pledges made in relation to cleaning up its waters, there is still hope that promises made relating to the sustainability of the games itself will be kept.

It was reported that during the London Olympics 400,000 tonnes of carbon dioxide equivalent were saved, 62 per cent of games operational waste was reused, recycled or composted and 100 per cent was diverted from landfill.

Further, 99 per cent of the waste from installing and decommissioning Olympic venues was reportedly reused or recycled.

Indeed, the London Olympics was a great success both in terms of sport and sustainability. It is hoped that Rio de Janeiro will be also be able to follow through with its sustainability and waste management plans.

More information about the Rio Olympic Games’ sustainability plan can be found on its website.

Sustainability of the Olympics relies on its legacy
By Resource |
27 June 2012 |
Add a Comment
Olympic advisors urge businesses to see the Games as a demonstration of how sustainability can be implemented on a large scale, and to continue developing green business practice after they’re over.