Gove must follow through on talk of renewed waste plan

Speaking at the WWF on Friday morning (21 July), Gove set out a ‘deliberately ambitious agenda’ to take opportunities to recast the UK’s approach to the environment. 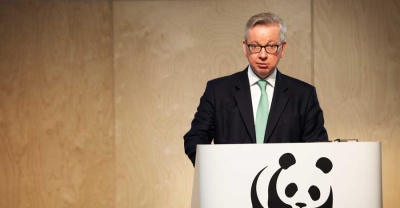 Photo: Greg Armfield, WWF-UK
One of the Department for Environment, Food & Rural Affairs’ (Defra) most sought-after pieces of work is the 25-year environment plant that was meant to be published in 2016. The long-term policy document was set to present an idea of the long-term vision for the environment  in the UK, but Brexit and this year’s election have meant it is yet to see the light of day.

There were reports that the plan was due to be published this summer, only for Gove to delay it once more to have more oversight over it, and on Friday, noting that the plan “has been longer in gestation than a baby elephant”, Gove said that he wants the plan to be “as ambitious as possible”, adopting “as rigorous a methodology as possible to setting goals and reporting success or failure”.

The long-term plan was meant to follow on from a five-year plan that was published last February – a plan that drew strong criticism from the waste and resources industry for its near total ignorance of resources. However, in his speech Gove spoke of a desire to “improve incentives for reducing waste and litter, and review the penalties available to deal with polluters – all part of a renewed strategy on waste and resources that looks ahead to opportunities outside the EU”.

Responding to the speech, ESA Chairman, Dr. Stewart Davies, said that he was “most encouraged” by this reference to a strategy for waste and resources and is now looking for the claim to be followed up.

Davies said: “ESA looks for this to be taken forward now and for Defra to demonstrate focus and urgency in championing the waste and resource management sector, for which it is the Whitehall sponsor.

“The ESA sees an urgent need for a waste and resources strategy from government to address the looming treatment capacity gap: the industry thinks that by 2030 we will end up around five million tonnes p.a. short of treatment infrastructure as 80 per cent of landfill capacity is expected to close by then.

“A waste and resources strategy is also needed so that Defra can align other government initiatives (Industrial Strategy; National Infrastructure Assessment; Clean Growth Plan) involving the sector that are already taking shape.

“ESA looks forward to engaging with Defra and would commit the necessary time and expert resource to work with the department to develop a 25 year Waste and Resources Plan in parallel with the 25 year Environment Plan already in preparation.”

Greater acknowledgement of the resources industry, and the role it can play in sustainable economic growth, would certainly be welcome, and Gove’s mention of it where previous ministers have not has raised cautious optimism among the sector.

Among the other features of last week’s speech was the confirmation that legislation banning microbeads in cosmetics and personal care products will be making its way through Parliament this Autumn, and David Palmer-Jones, Chief Executive of SUEZ recycling and recovery UK, says Gove is showing “encouraging leadership” so far, but that this must be followed up with more joined-up action.

Palmer-Jones said: “Making the change towards a more circular economy will only happen if policy levers, such as a ban on plastic microbeads, form part of a long-term integrated approach to managing these precious resources, with the concept of extended producer responsibility (EPR) – a polluter pays approach to levies on products that are not recyclable – at its heart.

“Our sector has long been crying out for a holistic, long-term, strategy from government to tackle the environmental issues caused by all plastic products throughout their lifecycle – not just those products that capture the public’s attention from time-to-time, and which are only the tip of the iceberg when you consider the vast quantities of plastic entering our natural environment.

“We would like to see government seize the opportunity to address the British public’s concern for the environment and introduce progressive policies which recognise all plastics, and other recyclable materials, as the valuable commodities they are, by linking them to the UK’s industrial strategy and domestic manufacturing base. If society and businesses value the material, it won’t be discarded and end up in our oceans.”

Gove pledges to raise environmental ambition with ‘Green Brexit’
By
Edward Perchard
| 21 July 2017 |
Add a Comment
Michael Gove has pledged to recast the UK’s ambition for its environment, promising to deliver a ‘Green Brexit’ as business leaders call on the government to take leadership on the creation of a more sustainable economy.

Long-term government environment plan could be shelved until 2018
By
Edward Perchard
| 26 June 2017 |
Add a Comment
The government’s much-delayed 25-year plan for the environment may not be published this year, after new Environment Secretary Michael Gove reportedly halted its publication in order to give it more personal oversight.

Environment Secretary Theresa Villiers expressed her desire to see the Environment Bill continue its passage through Parliament despite the forthcoming general election.

CIWM revealed the speaker, adding that the conference will now be free to attend