Discarded Glastonbury tents to be donated to refugees 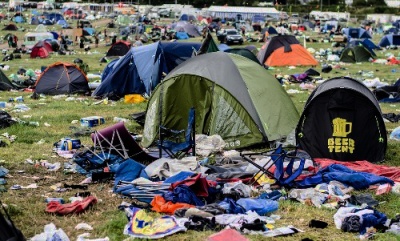 Discarded tents and camping gear from this year’s Glastonbury are being collected and donated to refugees in Northern France as part of a scheme run by a Bristol-based charity.

Aid Box Convoy, which was set up by volunteers in September last year to provide humanitarian relief to refugees in Europe, asked those leaving the festival if they would like to donate any sleeping bags, tents and non-perishable food to the cause and have also joined the clean-up operation to help dismantle the different camping sites and retrieve any usable equipment.

Monday saw the departure of around 153,000 festival-goers from the 900-acre Worthy Farm in Somerset after five days of music and arts.

In their place, a group of around 800 litter-pickers have spent the first half of the week picking up around 1,650 tonnes of waste. According to festival organisers, last year, an estimated 11 tonnes of clothes and camping gear were abandoned, including 6,500 sleeping bags, 5,500 tents, 3,500 airbeds, 2,200 chairs, 950 rolled mats and 400 gazebos.

Bad weather, which led to this year’s festival being particularly muddy, means that even more equipment is expected to have been left than usual, and organisers are expected a clean-up bill of up to £1 million.

This year, Glastonbury organisers tried to cut down on the waste created by the festival by asking each attendee to sign up to its ‘Love the Farm, Leave no Trace’ pledge when they purchased tickets. Through the pledge, attendees promised to use toilets and not urinate on the land, use the bins provided across the site, take all belongings, including tents and camping equipment home, and make use of the 100 recycling pens located in each campsite.

Reusable steel pint cups, made from recycled material, were also provided for the first time this year after three years of research and development. At the 10 major bars across the site, customers were asked to pay a £5 deposit on the cups, which could be exchanged for clean glasses when they bought more drinks, in an attempt to cut down on disposable cup waste.

Waste left behind after Glastonbury and other music festivals is an unwelcome product of the large-scale events that requires large clean-up efforts. Last year, Resource took an in-depth look at festival waste and what is being done to challenge it.

A survey carried out by Buckinghamshire New University in 2014 found that that 86 per cent of music festival waste comes from campsites, and 60 per cent of respondents admitted to discarding of their festival tents. The survey showed that cheap tents and camping equipment played a large part in the build up of waste, with 46 per cent of those surveyed paying less than £75 for theirs, and 60 per cent saying they left their tent because it was broken.

Previous charitable initiatives to collect unwanted tents at Glastonbury have not necessarily been effective, as the festival’s head of rubbish and recycling, Rob Kearle, explained to Resource when we visited the site in 2011: One year, he said, the number of tents left behind reached 20,000, after a group had put up signs asking for tents to be donated to Africa, but then “buggered off back to London with about 50 tents”. In 2010, he said, a local woman had collected about 1,000 to use to make clothes, and groups like the Boy Scouts and Air Cadets also sometimes get to pick through the leftovers. Asked if any tents wind up in landfill, despite efforts to reuse or recycle them, Kearle replied: “Yes. Because quite a lot of them have either been ripped or actually used as toilets. So, no one wants to recycle those.”

With more and more festivals being organised across the world, particularly in Europe, and as tent prices continue to fall, the problem is growing. The Love Your Tent campaign is one that aims to encourage festivalgoers to reuse rather than waste their festival homes. In 2012, the group ran a ‘Respect’ campsite at the Isle of Wight Festival, which required each of its users to sign up to the ‘Tent Commandments’ agreement that they would take all of their belongings home with them after the event.

At this month’s Isle of Wight Festival, three ‘Respect’ campsites were provided due to popular demand, with Love Your Tent reporting that all three were left free of tents, camping equipment and rubbish.

Features from Resource magazine on the rise of festival waste and the Glastonbury clean-up operation contain much more information on the issues.

The post-party clean up
By
Leonie Butler
| 13 August 2015 |
Add a Comment
Ahead of this year's Glastonbury music festival, we revisit a look at the clear-up operation of the waste created by the UK’s 6.5 million festivalgoers every year.

When the party’s over
By
Libby Peake
| 4 July 2011 |
Add a Comment
Whatever your age or musical interests, there’s a festival catering for your entertainment. But how can you handle the mess made by these temporary towns? Libby Peake visited the Glastonbury Festival site to find out

Glastonbury Festival harnesses the power of pee
By
Jennifer McDowall
| 17 June 2016 |
Add a Comment
Revellers attending Glastonbury this weekend will be able to test-run a urinal that hopes to bring sustainable power to refugee camps.