The UK has travelled far on its journey to increase recycling rates and reduce residual waste, but while some local authorities are making good time, others appear to have missed the train. Charles Newman reports

Most of us have experienced standing on a station platform, waiting for the train that’s interminably delayed. It’s frustrating, squinting into the distance hoping it will arrive eventually.

This is akin to the overall story of UK household recycling we have seen since the start of the decade, primarily due to the lack of investment in England’s local authorities – or perhaps due to leaves on the line and bad weather.

In 2018/19 household waste recycling in England, at 43.5 per cent, was barely two per cent higher than in 2010/11. Defra might point to the loftier 44.7 per cent figure for the recycling of ‘waste from households’ last year, which is higher due to the recovery of metals from incinerator bottom ash, but that is hardly a reflection of households intention to recycle. Defra identifies this figure to harmonise UK figures with reporting requirements for the EU Waste Framework Directive, but that just prompts us to ponder how we’re doing on that front.

The big story for anyone looking at these figures, beyond some notable individual successes, is just how far off we are from ‘ensuring that, by 2020, at least 50 per cent by weight of waste from households is prepared for re-use or recycled’, as UK’s 2011 Waste Regulations require. It’s not unreasonable to expect that the forthcoming Environment Bill will jettison this as it cuts the cord with EU Directives, replaced by some warm fuzzy words about the circular economy.

But it’s not all interminable delays. To varying degrees the devolved administrations have been pulling ahead and, for the first time since Resource began compiling league tables (2000/01), even the not-so-flying Scotsmen have overtaken taken England’s household recycling rate.

As has been the case throughout the decade Wales continues to set the standard, by our measure recycling 57.2 per cent of household waste. Alternatively, according to the Welsh Government’s preferred measure of municipal waste, recycling rates for 2018/19 were 62.8 per cent and interim reporting for this financial year suggests local authorities to the west of Offa’s Dyke are now recycling 67 per cent.

The key remains investment in comprehensive council recycling services including separate food waste collection (all backed with ongoing communications) while at the same time reducing the residual waste capacity. I’ve heard cynics and critics point out that has cost a lot more per head to  get to this point, with little recognition that once these gains have been banked, they remain  banked, offsetting climate change. Looking at the national figures it’s no surprise that, for the second year running, Northern Ireland is the country with the most significant improvement as it continues to promote a policy of separately collecting organic waste. What’s worked for Wales has unsurprisingly begun to work here as well.

The league tables published here continue to be ordered according to Resource’s preferred measure of residual household waste per head in each local authority, as this still represents the best measure of progress towards zero waste – or at least the circular economy. Ultimately, though, the key is reducing overall resource use as this has the most significant impact on reducing greenhouse gas emissions, so we continue to also report on total waste arisings per head.

With respect to these measures, the UK has been travelling in the right direction since we started reporting on this. Again, as has been the case with recycling rates, the biggest improvement has been made by local authorities in the devolved administrations. Although England continues to have the lowest waste arisings per capita, we believe this is not because householders in England are consuming less but that councils in the devolved administrations are lifting more commercial waste in with household collections.

In terms of reducing waste, the most notable progress among England’s waste collection authorities was made by Torridge District Council, which rolled out a service change in June 2018. Compared with the previous financial year, the amount of residual waste collected by the council fell by 58 kilogrammes (kg) per person – a reduction of almost 25 per cent – raising its recycling rate by 10 per cent in the process. This was achieved by introducing a weekly collection of food waste, reducing the frequency of residual collection to fortnightly and switching from a co-mingled collection of dry recycling to a weekly kerbside sort.

The other notable waste collection authority in this year’s table is Lewes District Council, which conversely transitioned to a fully co-mingled collection service in 2018, raising its recycling rate by 13 per cent, reducing residual arisings by 51.8kg per person. Looking at the data, the key appears to have been keeping contamination low and reject rates from the Crayford MRF to an extremely impressive 1.5 per cent.

The impact of a long hot summer had a significant impact on reducing the amount of green waste collected from both these leafy local authorities. Lewes had already rolled out food waste collection services the previous year, so it’s consistent with expectations that total waste arisings and residual waste arisings would fall by a larger amount in Torridge. 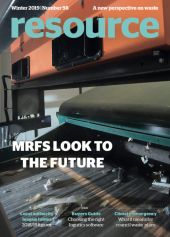 This article was taken from Issue 98

Turning to the league table for unitary and waste disposal authorities, once again Welsh councils lead the way in terms of residual arisings per person with eight of the best ten performers. Topping the table for 2018/19 was Bridgend, which made changes to its source separation collection service (operated by Kier), which contributed to residual waste falling to 125kg per person. Although the council was already running a kerbside sort, changing containers and investing in new communications appears to have had an effect.

Among the notable improvers in this list, Croydon Council’s decision to reduce the capacity of the residual bins at the same time while offering more space for dry recyclables appears to have paid off, resulting in an increase of just under 10 per cent in the recycling rate and a drop in residual waste of 47.6kg per person.

In Scotland, West Lothian tops this year’s table, having reduced the amount of residual waste to just under 142kg per person for 2018. A key factor here appears  to be squeezing the capacity of the residual bin – residents here have 140-litre bins collected fortnightly – augmented with weekly food waste collection and a co-mingled collection of dry recyclables, excluding glass. Notably, in something of a continental approach, West Lothian has set up approximately 200 mini-bring sites for the collection of glass according to colour.

Although this year’s tables offer a mixed story in terms of progress, the measures needed to achieve high levels of recycling and the reduction of residual waste are perfectly clear, even if implementing the changes and getting the public on board can be challenging.

For the growing number of councils declaring a climate emergency, this is the track they need to travel along.