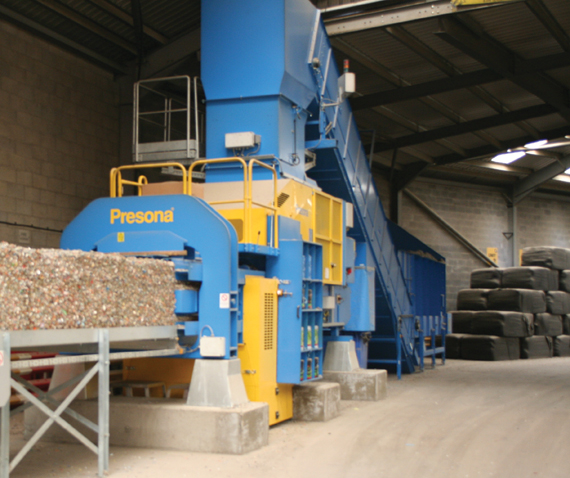 The Presona LP50 has been at our site in Perry Barr, Birmingham, indoors, where we have been using it to bale solid refuse fuel (SRF).

A 3.2 cubic metre bucket loads material into a hopper, which takes it to an incline conveyor to feed the LP50. This puts it into the top of the baler, where it is pre-pressed. The LP50 is two metres wide and eight metres tall, and in our case, the whole system is approximately 20 metres long. Siting the equipment proved a bit of a challenge, but that was due to some features of our building, where the height from floor to ceiling is less than eight metres.

The equipment can handle up to 24 tonnes per hour, and the output bales are very robust and dense, i.e. they don’t fall apart, and so, in this regard, it outperforms other balers we have used. Although our primary use is SRF, this kit is capable of processing other materials, including cardboard, paper and plastics.

Overall, the baler is essential for us to be able to efficiently transport the material for end-use – if this material was put loose into an articulated lorry it would fill after 16 tonnes when it can carry 24 tonnes. As some of our markets are in Europe, the baling is a necessity. The LP50 is particularly cost effective as it uses polypropylene twine rather than steel wire to bind the bales – doing this has reduced the cost of these consumables by 70 per cent and, with the prepress, power consumption is reduced by up to 60 per cent over a standard shear baler. These were key considerations when opting for the equipment.

The 1052-50 twin-ram baler is sited in the process hall at Wastesavers, and we use it to bale mixed plastics, aluminium foil and cardboard. Although we don’t bale other materials using this machine, it is suitable for paper and steel cans.

It has a large horizontal piston referred to as a gatherer cylinder. This cylinder moves backwards and forwards picking up materials as it passes the feed hopper suspended above. The material is then compacted against the end wall
of the baler. Once the bale size has been achieved, an ejection door is opened and the bale ejected at a right angle using an ejection ram. The bale is tied off as it’s ejected using an accent wire tying system. This process is fully automated.

This article was taken from Issue 76

We find the maximum size bale is two metres deep, 1.1 metres wide and 0.77 metres high. The depth and height of the bale are fixed due to the dimensions of the baler. However the width and density of the bale can be adjusted. Each bale weighs 600 kilogrammes and has 10 high tensile wire straps holding them together. We do not have issues with wires breaking or bales failing. Throughput is subject to the nature of material – at Wastesavers we currently process 1.8 tonnes of plastic per hour.

The operator requires one or two days training to operate the baler, but requires several weeks to become fully familiar with the machine. The TR1052 is fully automated and relies on sensors, pressure sensors and proximity switches all activating in sequence. Any failure during this process will require investigation and system reset.

The baler was commissioned in October 2008. We process six tonnes of plastic and one tonne of card every day, five days per week. We have not encountered any major failures – only wear and tear.

In my experience, plastic is best baled using a twin-ram system such as this one. Compacting material is relatively straightforward. Tying the material and holding it together once ejected is key to the process. Twin-ram balers have an automated tie system; this negates the need to manually feed wire through
channels that get blocked with debris. The manufacturer was chosen because of cost and lead-time. I would recommend this system if baling plastic.