What can be done to curb impact of plastic bottles and coffee cups, ask MPs

The impact of disposable drinks packaging on the environment is to be investigated by Parliament’s green watchdog, the Environmental Audit Committee (EAC), after the growth of high profile campaigns against takeaway coffee cups and plastic bottles. 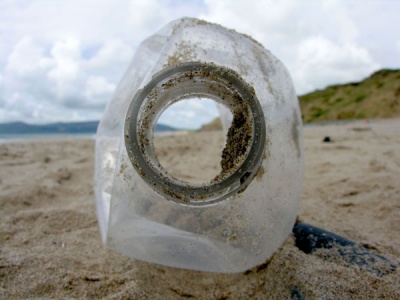 Photo: T Fanshawe / Marine Conservation Society
The inquiry will look at what actions are being untaken by industry and government to reduce waste generated by the two, and investigate possible solutions.

Disposable, single-use packaging has played a major role in the build-up of plastic pollution in the world’s waterways, an issue that the EAC has already addressed in the past year through an inquiry into the effect of microplastics on marine environments, an investigation that concluded with a tentative UK ban on the use of microbeads in cosmetic and personal care products.

Studies by Eunomia Research & Consulting suggest that around 12.2 million tonnes of plastic enter the marine environment every year, 80 per cent of which comes from land-based sources. According to the Ellen MacArthur Foundation the weight of plastic in the world’s oceans could outweigh that of fish by 2050.

Litter and leakage from waste streams contribute significantly to this waste entering the environment, and coffee cups and plastic bottles are two heavily-used disposable products that the EAC says are ‘particularly problematic’. Thirty-five million plastic bottles are sold in Britain every day, but only around half are collected for recycling, while around seven million paper takeaway coffee cups are thrown away every day, yet only one of every 400 are recycled due to their complex structure.

Both have been the subject of high profile campaigns in the media over the past year, with several national papers and Sky leading the call for a deposit return scheme to introduce the practice of taking plastic bottles to retailers as a way of raising the recycling rate of plastics. There was also national outcry last year when celebrity chef and campaigner Hugh Fearnley-Whittingstall highlighted the issue posed by the plastic lining of coffee cups.

EAC Chair Mary Creagh MP, winner of this year’s Resource Hot 100 poll of the waste world’s biggest influencers, said: “Our throwaway society has given us a tide of litter on our beaches, dead seabirds and fish, and plastic in our food. We all enjoy a take away coffee or tea, but the cups they are served in are particularly difficult to recycle because they combine plastic coating and cardboard.

“Our inquiry will be taking a serious look at solutions like the use of different materials, better recycling and bottle deposit return schemes.”

The idea of a deposit return scheme (DRS) has been in development for some time in Scotland, and in the last year or so has spread to the wider UK as a solution for the littering and recycling of plastic bottles is sought, though it is by no means a universally welcome proposal among the industry, and reports suggested that the government had last month dismissed the possibility of a DRS as ‘unlikely’.

Supporters say that such a scheme, which would see a deposit of a few pence added to products sold in plastic bottles and returned to the consumer when it is returned for recycling, would drive the material into controlled recycling streams, and thus keep it out of landfill and prevent littering.

Examples of effective DRSs are cited in European nations like Sweden, Belgium and Germany, where reverse vending machines allow shoppers to return their products easily at supermarkets.

Reverse vending machines are used for some deposit schemes in Europe
Critics point out that the majority of the positive European examples were introduced before the proliferation of kerbside recycling systems and that many of them take place in nations where there is a lot more space for their implementation. Questions include how retailers will be able to store returned goods in stores not designed to take them, the cost of adopting and administrating such a system and whether consumers would actually use it.

In August 2015, AG Barr, the manufacturer of Irn Bru, announced that it was scrapping its traditional 30p buyback scheme for consumers returning glass bottles as use of the system had dropped from 90 per cent in the early 1990s to only about 50 per cent in recent years due to improved kerbside collections.

Indeed, plans for a Scottish DRS were shelved last January as then Environment Secretary Richard Lochhead, a vocal backer of the system, said that further consideration was needed regarding the interaction with local authority kerbside collections, the impact on price, evidence of behaviour change and retailer and manufacturing costs.

The main opponents to a DRS seem to be the packaging industry and local authorities, who fear the effect of the scheme on kerbside recycling collections. Beverage giant Coca-Cola GB gave the campaign to trial a DRS in Scotland a huge boost last month when it acknowledged, after years of opposition, that the time was right to trial ‘new interventions, including a ‘well-designed DRS’, in Scotland.

Research from packaging trade association INCPEN and anti-litter charity Keep Scotland Beautiful released late last year suggested that behaviour change campaigns would be more effective in reducing litter than incentive schemes like a DRS, while news of Defra’s stance on a DRS led the On-Pack Recycling Label scheme to state that deposits would ‘cannibalise council collections’ and lead to an overall reduction in recycling.

The solution to reducing the environmental impact of takeaway coffee cups is also a controversial one, with the warring approaches of targeting better collection, use reduction or design.

The issue of the cups is that the paper casing must be fused with a plastic lining to make them waterproof, making them unsuitable for traditional paper recycling streams as the plastic can not be easily separated. Only two sites in the UK are able to separate the two materials, leading to the poor recycling rate.

Responding to the furore caused by Fearnley-Whittingstall’s BBC Hugh’s War on Waste exposé of major coffee chain’s sustainability claims, the industry unveiled ‘The Paper Cup Manifesto’, an industry-wide initiative with the objective of significantly increasing paper cup recovery and recycling rates by 2020.

While some retailers have trialled incentives for consumers bringing reusable cups for their takeaway coffee, others have backed schemes to improve the separate collection of cups, with environmental charity Hubbub coordinating the Square Mile Challenge to focus on the largest commercial district of London.

Fearnley-Whittingstall criticised this action, however, accusing the coffee chains of running low-level campaigns to ‘greenwash’ their actions, suggesting that until a cup is designed that can be recycled with other paper products the problem will not be solved. At least two such cups have been launched in the past few months, with the UK’s only paper cup recycling scheme Simply Cups backing California-based Smart Planet Technologies (SPT) ‘reCUP’ product, and UK company Frugalpac launching a cup of its own.

While chains have been quick to show action being taken on the issue of coffee cups, the sight of customers using them when drinking in cafes is still all-too-common, and a levy on the use of cups, similar to that of carrier bags, has been suggested to reduce their use, the simplest intervention. However, Defra has said that there are no plans to introduce such a levy, though the EAC inquiry may find that such a measure would be beneficial.

As part of its new inquiry, the EAC is asking for submissions of evidence of the impact of the two pieces of packaging, what is hindering their recycling, what progress has been made to address the issues and what solutions or incentives could be used to make more significant progress.

Written evidence should be received by the EAC by Wednesday 5 April and can be submitted through the inquiry’s page on the EAC’s website.

Defra to reject deposit-return schemes
By
Katy Carter
| 15 February 2017 |
Add a Comment
Officials from Defra have played down the possibility of introducing a deposit-return scheme for plastic bottles as part of its new litter strategy for England, according to reports.

A UK ban on ocean-polluting microbeads gets closer, but we’re not quite there
By
Edward Perchard
| 5 September 2016 |
Add a Comment
The government will hold a consultation later this year to consider how best to ban the tiny fragments of plastic used as exfoliants in cosmetic products, with the hope of finalising a ban sometime in 2017.

Coca-Cola U-turn gives Scottish deposit campaign boost
By
Edward Perchard
| 22 February 2017 |
Add a Comment
The growing campaign to introduce a deposit-return scheme for bottles in the UK has gained more momentum after beverage giant Coca-Cola announced its support for a Scottish trial after years of opposition.

The Alliance for Beverage Cartons and the Environment has announced a 2 per cent rise in beverage recycling rates, marking fourteen years of annual increases.

Veolia has agreed a long-term contract to provide recycled glass to Knauf Insulation, which will be processed at a new £10-million facility.

The Confederation of Paper Industries (CPI) has found evidence that some householders have been disposing of Personal Protective Equipment (PPE) through their household recycling.

Four UK-based innovation and research projects have been awarded £500,000 of funding from the Ecosurety Exploration Fund, giving the waste and recycling sector a boost on its path to a circular economy