Four large trade associations from the waste industry have written to Resources Minister Therese Coffey calling on Defra to "take urgent action" to support the recycling industry following China’s announcement that it will be seeking a ban on the import of all scrap plastics and unsorted waste paper.

The letter, written by the Resource Association, the Recycling Association, the Confederation of Paper Industries (CPI), and Environmental Services Association (ESA) also requests that Defra prompts WRAP to turn some focus to market development.

China notified the Word Trade Organisation (WTO) back in July of its decision to introduce the ban, a move that has caused uncertainty within the UK recycling industry. China stated that it envisages the ban to be in place at start of 2018, restricting imports of recovered materials unless they reach a contamination level of just 0.3 per cent, as well as a complete ban on the import of post-consumer plastics and mixed papers.

In the letter, the four trade associations ask that Defra sends a UK delegation to China to "negotiate at a high level in support of our desire to continue to provide the Chinese economy with secondary materials that they need, on terms that are reasonable and continue to protect the environment as well as being practicable in a UK context". 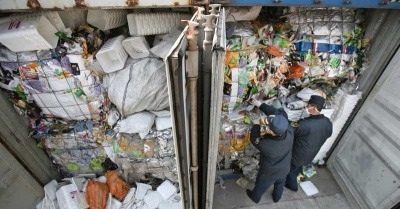 It also states that the restriction of contamination to 0.3 per cent “has the potential to be very damaging for UK recycling performance,” adding that “such levels of contamination are difficult to achieve without excessive costs and are a significant tightening of rules beyond what is needed to ensure good quality material is received at minimal environmental impact.”

With Defra reviewing the future funding and programmes of WRAP, the four trade associations have also asked Coffey and WRAP to return to the "pressing matter of ‘recycling market development' and ‘demand-pull measures' to encourage the use of secondary materials in UK manufactured products and open up new market opportunities" and link this to the developing Industrial Strategy.

The letter reads: ‘In 2016, over 260,000 tonnes of plastics and 3.7 million tonnes of fibre (paper and card) were exported to China from the UK. UK manufacturing capacity for paper in 2016 was just over three million tonnes. Although our members have put in place contingencies and are currently finding alternative markets, the downward pressure on prices as the world competes for these smaller markets is cause for concern.

‘At the very least, we appeal to you to revive [market development] as part of your forthcoming renewal of waste and resources strategy, but hope that you will consider convening a roundtable on these issues more quickly than that, to appreciate in more detail the pressing urgency (particularly in relation to China).’

Ray Georgeson, Chief Executive of the Resource Association, set out the crux of the letter’s argument at the Kent Resource Partnership’s annual conference in Canterbury last week (22 September).

He called on UK officials to ‘get on a plane to Beijing’ and to lobby the Chinese government to relax the proposed tighter import controls.

Georgeson said: “We are told it is for real this time. They are tightening their demands down to levels that the supply chain says they just cannot meet. A 0.3 per cent contamination level is pretty much close to impossible to achieve, and 1 to 1.5 per cent is thought to be ok.

“I know Defra have had the industry in for some representation and dialogue. From my perspective and those of other associations there is an urgent need for the UK government to get on the plane to Beijing take a delegation to China and start negotiating.

“Don’t underestimate the seriousness of the Chinese situation. But it ought to be solvable with some serious diplomatic intervention.”

The letter is a new addition to mounting pressure on the government to act, after the Recycling Association and CPI already wrote to several high ranking ministers in August about the need to engage in diplomatic negotiations over the proposed ban. This original letter asked the UK government to negotiate an extension with the Chinese government to give the industry more time to co-operate with China on improving recyclate quality.

Ministers urged to pressure China on ban on waste imports
By
Rob Cole
| 10 August 2017 |
Add a Comment
The Recycling Association and the Confederation of Paper Industries have urged ministers to contact the Chinese government over its proposed ban on all waste plastics and unsorted paper from 2018.

Could the Chinese export ban lead to a great leap forward for British recycling?
By
Rob Cole
| 8 September 2017 |
Add a Comment
As China cracks down on imports of foreign waste, what impact could this policy shift have on the UK recycling sector?