Magazine
Off the wall

A round-up of some of the more unusual stories coming out of the waste and resources world...

Would you like to continue shining beyond the grave? A futuristic cemetery proposal turns death into beauty by using the organic energy latent in our loved ones’ biomass to power an elegant and perpetually renewing constellation of light that could illuminate pathways.

Following a competition to design an environmentally-friendly means of burial, plans for a memorial forest in Bristol lit by biomass-powered lighting will begin this summer. The idea involves placing remains in cyclical ‘memorial vessels’, which will accelerate decomposition – making them more sustainable than traditional burial practices, and creating a multilevel wooded landscape filled with light.

A team from the perkily-named DeathLAB at New York’s Columbia University and LATENT Productions created the ‘Sylvan Constellation’ concept, and they will spend a month-long residency at Bristol’s Arnos Vale Cemetery to explore implementing the design. 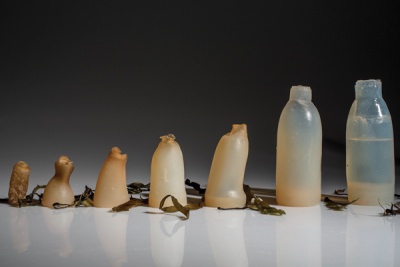 As the world scratches its head about the amount of plastic waste leaking into our environment (and often finding its way, dangerously, to our seas and marine food chain), a student at the Iceland Academy of the Arts has created a biodegradable algae-based water bottle as a green alternative. Once the bottle is empty, it immediately begins to decompose, providing a seemingly miraculous solution to plastic bottle waste.

The bottle is made from agar – powdered algae that, when mixed with water, can be moulded into shapes. The result is also edible, although only if you’ve an appetite for ‘seaweed jello’, as designer Ari Jónsson describes it. It’d certainly be better than eating seafood full of particles of plastic waste, we think! 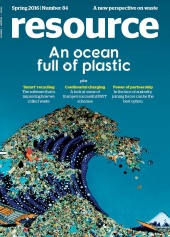 Ever wondered how sustainable the fictional characters from your favourite soap are? An ‘analysis’ of episodes by Sainsbury’s found that residents of Emmerdale are the most food waste savvy and least likely to overfill their plates, while EastEnders are most wasteful. The beautfiul young things in Hollyoaks, meanwhile, were considered the most sensible shoppers, even commenting on the need to get their shopping home so that the ice cream didn’t melt.

To compile the data, researchers had the arduous task of sifting through 10 episodes of each soap and taking note of how full the characters’ plates were, as well as their shopping habits and how they stored their food. Patrons of the Queen Vic – you’re being watched.

Good enough to eat – an edible cutlery line, made from millet, rice and wheat, and available in several flavours including ginger-cinnamon and carrot-beetroot, is being expanded, following some highly successful crowdfunding (that demonstrated a real, ahem, appetite for the product). Bakey’s was founded in India, the world’s greatest user of disposable cutlery, where about 120 billion pieces per year are thrown away. The edible utensils have a shelf life of three years, but contain no preservatives.

Already, Bakey’s sells 1.5 million such spoons each year, but a campaign to launch the products worldwide has surpassed its Kickstarter funding, raising more than £160,000 after setting a £14,000 goal. Production is due to begin soon. And even if you don’t feel like eating your knife and fork after a meal, the cutlery should decompose naturally within a matter of days.