The UK Without Incineration Network (UKWIN), a national network of around 100 campaign groups opposing incineration, has warned investors of the risk that gasification projects present with a briefing highlighting more than a dozen failed projects. 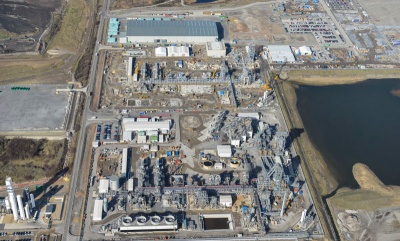 Air Products's abandoned TV1 development
The briefing – ‘Gasification Failures in the UK: Bankruptcies and Abandonment’ – follows a number of high-profile issues and abandoned projects in recent years, including US gas producer Air Products quitting the energy-from-waste business and writing off up to £700 million on two unfinished gasification facilities in the Tees Valley.

In April of this year, the company said that testing and analysis at the Tees Valley Project, which consists of two gasification projects – Tees Valley 1 and 2 – had concluded that ‘additional design and operational challenges would require significant time and cost to rectify’.

Tees Valley 1 (TV1) cost an estimated £320 million to construct and was originally due to begin operations in 2014, but had not passed the final stages of commissioning, while construction on the second plant had begun but was stopped last November, reportedly resulting in 700 construction workers being laid off.

This was followed by energy-from-waste specialist Energos entering administration in July, after deterioration in the construction of Viridor’s £154-million Glasgow Recycling and Renewable Energy Centre (GRREC) relating to the ‘design, procurement and installation of the gasification plant’. Construction firm Interserve, which was building the GRREC then announced that it was leaving the energy-from-waste industry after problems rising from its ‘unique challenges’ had overshadowed its first-half results for 2016.

‘A litany of failures’

The UKWIN briefing seeks to provide information on gasification and pyrolysis projects and companies, stating: ‘Promoters of gasification and pyrolysis schemes… regularly make bold claims about the technological, environmental and financial performance of their proposed facilities with a mixed waste feedstock. In reality, where such configurations have been attempted they have either failed to live up to these claims or operators remain suspiciously quiet about reporting actual performance.’

The seven-page document goes on to explain: ‘Gasification and pyrolysis constitute some of the riskiest technologies in the waste industry and are synonymous with bankruptcies, failures and broken promises. This perception is well deserved, with the lack of examples of success starkly contrasting with a litany of failures.’

Delays to the gasification plant at Viridor's GRREC cost construction firm Interserve £70m
Image: Viridor
As well as Air Products, Energos and Interserve, the briefing highlights eight other projects and companies in the ‘advanced conversion technology’ sector that have entered administration or failed to follow through on gasification projects.

Among them is New Earth Solutions, which was sold two days after entering administration this summer, having decoupled from its waste and energy businesses in 2015. The briefing explains that, as well as its material recovery facilities and composting facilities, which have now been taken over by Irish company PandaGreen, ‘New Earth Solutions, New Earth Energy, and New Earth Advanced Thermal (NEAT) Technology [now trading separately as Syngas Products Group] are associated with several failed gasification projects’.

New Earth Solutions developed six ‘abandoned’ gasification plants, according to the briefing, including one at Easter Langlee in Galashiels, which UKWIN suggests cost Scottish Borders Council ‘at least £2.4 million with nothing to show for it’.

Shlomo Dowen, National Coordinator of UKWIN, commented: “Promoters of gasification and pyrolysis schemes often cite existing and past projects to bolster support for their new proposals, but don’t like to mention that those other projects were actually embarrassing failures.

“Gasification and pyrolysis is an expensive misstep when it comes to waste management, because even if someone ever manages to get the ill-fated technology to work it would still have all of the problems of more conventional waste incineration.

“As with all forms of incineration, these technologies would result in shocking levels of CO2 being released and would rely upon destroying valuable material that should be recycled, composted or reused”.

The full ‘Gasification Failures in the UK: Bankruptcies and Abandonment’ can be downloaded from the UKWIN website.

An in-depth look at the development of gasification and pyrolysis technology and what its future may hold can be found in the next issue of Resource, out later this month.

Air Products shuts down Tees Valley development
By
Edward Perchard
| 5 April 2016 |
Add a Comment
American gas producer Air Products has announced that it is leaving the energy-from-waste business, ceasing the development of two large incinerator developments in the North East.

A new code of practice for the refuse derived fuel (RDF) market has been published today to set out a framework that shares good practice across the industry in an attempt to increase the confidence of customers and regulators in RDF processes and products.

Energy company Vital Energi has signed a contract to develop a new energy-from-waste (EfW) plant in Drakelow, near Burton Upon Trent.