Plans for ‘the largest biomass power station in the UK’ are close to being finalised after the project secured investment from Australia.

The European Commission sanctioned the project’s Contract for Difference (CfD) with the Low Carbon Contracts Company earlier this year, meaning construction is ready to begin.

Redcar and Cleveland Borough Council first approved the scheme in 2008, with central government consent following in 2009, but funding for the project had not been found until this deal. 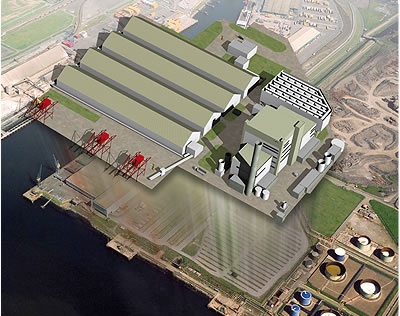 Current plans for Tees REP suggest that the 299 megawatt (MW) biomass power station will be able to generate enough energy to power 600,000 homes, 24-hours a day.

The plant will be fuelled by wood pellets and chips produced as residue from forest management schemes, the majority of which will be imported from the USA and Europe.

MGT Power predicts that that it will save about 1.2 million tonnes of CO2 per year by displacing a mix of coal and natural gas from UK energy generation, whilst also contributing one per cent to the UK’s legally binding 2020 renewable energy target (of 15 per cent of all energy consumed)..

Taking into account the lifecycle energy of producing and transporting the fuel chips, MGT asserts that the projects carbon dioxide equivalent emissions will be approximately 82 per cent lower than a typical coal-fired power plant.

It added that it expects the three-year construction of the plant to create at least 600 jobs, with around 100 permanent jobs following the plant’s commercial opening, planned for 2019.

Speaking following Macquarie’s investment was announced, Ben Elsworth, CEO of MGT Power, commented: “Following the sanction by the European Commission of the Project’s CfD earlier this year, the involvement of Macquarie as an investor and adviser represents another major step forward in the process to finance the project with the aim of starting construction on site by early 2016 at the latest.”

Mark Dooley, European Head of Infrastructure, Utilities and Renewables at Macquarie, added: “Macquarie is delighted to be partnering with MGT to bring this landmark project to fruition.

“As one of the first renewable energy assets to be project financed under the new UK CfD regime and the largest dedicated biomass project to be built in the UK, the project presents some challenges but also a great opportunity for the finance market.”

This is the first of two biomass plants expected to be built in the area, with Port Clarence Energy Ltd’s 45MW plant set for Stockton, still awaiting funding.

Government guarantees £48.5m for biomass plant
By
Annie Kane
| 19 August 2014 |
Add a Comment
The Treasury is to guarantee bonds worth up to £48.5m for the Speyside Biomass project, to help ensure it comes online.

Teesside plastic plant set to open
By Resource |
17 April 2012 |
Add a Comment
Sims Recycling Solutions have confirmed that its new plastics recycling plant on Teesside is expected to begin full operations in May.