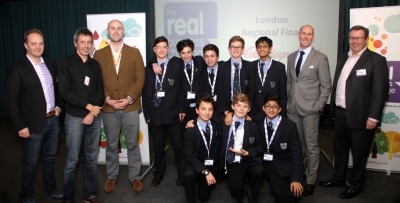 Whitgift School won the first regional final, held in London.
The regional stage of a national enterprise competition run by beverage giant Coca-Cola Enterprises (CCE), challenging secondary school students to design a litter awareness campaign, has begun this week in the lead-up to a national final in March.

Part of the corporation’s ‘Real Business Challenge’, the competition has seen student teams from over 870 secondary schools across 11 regions in Great Britain tasked with designing an awareness campaign encouraging members of the public in their local area not to litter.

The competition is open to students in Year 9 or 10 in England and Wales, and S2 or S3 in Scotland. The first stage, which saw students working on campaigns in schools ran in November last year, and has now be followed by a regional competition.

To support the challenge, CCE has partnered with a number of industry campaign groups including Keep Scotland Beautiful, Keep Wales Tidy, Hubbub and Clean Up Britain (CLUB). Representatives from these and other bodies will be on hand during the competition’s regional and grand final stages, dispensing expert advice to the students.

Beginning this week, finals will take place in Scotland and Wales and throughout regions of England, to determine which teams go through to the Grand Final in London on 16 March.

Finalists will also participate in a parliamentary reception at the House of Commons, where they will present their litter campaign ideas to a panel of MPs including Stephen Crabb, the government’s Minister for Wales.

Real Business Challenge forms part of CCE’s education programme, The Real Experience, which also includes factory-based Education Centres for school groups at its six manufacturing sites across the country. The number of schools entering the competition has almost tripled over the past four years, now reaching close to 89,000 students.

Commenting on the competition, Gina Solimeno, Education Programme Manager at CCE GB, said: “We are therefore thrilled to be partnering with Keep Scotland Beautiful, Keep Wales Tidy, Hubbub and CLUB to raise awareness amongst young audiences of the great work they are doing to achieve our shared vision of a clean, litter-free Great Britain.”

Keep Scotland Beautiful Chief Executive Derek Robertson said he was delighted to be able to support the project, and was impressed by what he saw in the first stage of the programme last year: “The enthusiasm of the young people taking part truly inspired me. All those who presented their innovative ideas did so in a very professional way; they were a credit to their schools and to our country.

“Keep Scotland Beautiful work hard to empower young learners to take action and become advocates for a sustainable world. Through programmes such as this, we know that young people will gain an understanding of environmental and sustainable issues in a global and local context.”

Trewin Restorick, founder and chief executive of Hubbub, concluded: “Hubbub is delighted to be supporting the Real Business Challenge. It is a fantastic way for young people to gain skills, build confidence and create new solutions for a problem that impacts upon homes, communities and businesses across the UK.”