Six of the best new products at RWM 2017

Three days at RWM 2017 in Birmingham last week gave us plenty of time to peruse the many exhibits on show. Here are six of the best new products that impressed us.

PRM Waste Systems has released a new Bio-Processor for treating food waste and organic waste such as sewage sludge, unseparated organic waste and meat or animal by-products. Designed by engineer Ben Moore, the processor uses a microbial digestive process and a controlled environment to turn waste into a product between 20-30 per cent of the original volume within 24 hours. The resulting product can supplement a biomass unit or be applied in different ways, such as for soil enrichment.

The processor has three compartments, through which the waste is passed. In the event that something hazardous enters the processor, such as human effluent, the compartment that it is in will be shut off and the contents sterilised.

The processor is also fitted with JEM Adaptive Logic which records the conditions it applies to certain wastes in order to treat them and communicates that to other machines, which are then able to apply those conditions when encountering that type of waste in order to increase efficiency.

The system is able to handle the majority of residual mixed waste including types of waste often thought of as unrecyclable, such as plastic films, laminates and black plastic. The feedstock is separated in a feedstock preparation module to ensure that any contamination remains within acceptable limits, identifying unwanted items such as glass and removing them from the waste stream before the feedstock is shredded and dried.

The shredded feedstock is then fed into a thermal cracker where the long carbon chains found within plastic are ‘cracked’ into smaller chains. Hydrocarbon vapour escaping the reactor is collected, filtered and treated for impurities, before being refined into Plaxx®, a heavy fuel oil. The entire process is monitored through an advanced control system that checks and regulates a number of variables such as temperature to ensure that the quality of the refined oil remains consistent.

Green Eco Technologies new WasteMaster seeks to address the global food waste problem by making it easier for businesses like food manufacturers, hospitals and restaurants to dispose of their food waste.

Businesses can lease a WasteMaster unit from Green Eco Technologies and deal with their food waste using its patented technology, which breaks down organic matter in an accelerated process without using water, bacteria or other additives.

This process, which takes between 12 and 20 hours depending on the type of material loaded, significantly reduces the weight of the organic material; for every 100kg of food waste that goes into the WasteMaster, 20kg of odourless, manageable material comes out, which then goes into the production of green energy through anaerobic digestion (AD).

The process is controlled remotely by Green Eco Technologies using its diagnostics system, which means staff operating it need very little training to be able to load the machine. The WasteMaster will alert when it is full and will automatically empty, while sending analysis to businesses reporting exactly how much food waste they are producing.

Blume is an LED lightbulb that lasts a lifetime, aiming to make lighting solutions more sustainable and environmentally-friendly. With standard LED bulbs classically failing within a few years, having poor quality lighting and looking a bit stark, the team at Blume wanted to create a long-lasting, aesthetically pleasing and affordable product. 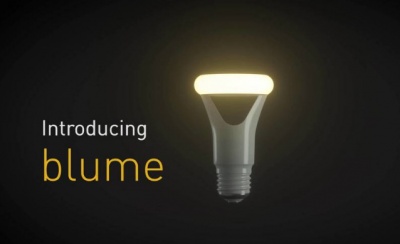 Blume’s secret to longer life is low operating temperatures through the use of super-efficient electronics and optics and a unique airflow system that brings temperatures down to almost 40°C cooler than competitors, making the bulb more durable and safer.

The retail price is envisioned to be around £15, giving ten times the lifetime for twice the price, while providing a 0.7 per cent annual reduction in CO2 emissions.

PreventIt is a new fire prevention technology which monitors temperatures in waste stockpiles, sounding an alarm when an area becomes too hot, so those working in waste and recycling can prevent fires before they start.

Multiple temperature sensors are distributed throughout a waste stockpile to achieve the required level of detail, since different areas in the stockpile gain and lose heat at different rates - a single sensor would be insufficient.

Real time data is sent to the operator’s computer, allowing them to see where heat is rising or dropping in their stockpile.

For a typical medium-large waste site, PreventIt will cost less than £1 per tonne woodchip stored, with ongoing costs generated by the sensor cable and the annual software licence.

Seligo.pro is a new online platform produced by Seligo aiming to remove the barriers to better waste treatment and optimisation by serving as a link between supply and demand.

Following its UK launch, Seligo founder Thomas Paris said: “Having worked for many years in the waste industry, I know that a more streamlined relationship between waste collectors and waste treatment centres can exist. That’s why we created Seligo which matches waste collectors to sites with capacity, however marginal. We’ve eliminated the need for costly and time-consuming validation procedures. Seligo improves economic margins and reduces environmental impact for both parties in the waste cycle. It’s better for business, and better for the environment.”

Five things we learned at RWM 2017
By Resource |
15 September 2017 |
Add a Comment
Three days of expert discussion and presentations covered a lot of waste and resources ground at the RWM Conference in Birmingham this week. Here’s a snapshot of some of the things that we picked up wandering the show floor.

A new report by think tank Carbon Tracker and consultancy SYSTEMIQ has found that global efforts to tackle climate change and plastic waste could result in £300 billion of stranded petrochemical assets for the oil industry.

For the first time, insects have been found to retain microplastics when transforming from aquatic larvae into flying adults, enabling previously unexposed creatures and environments to become polluted.

Mushroom supplier to pay charity over £50,000 for breaking packaging regulations

Walsh Mushrooms Group will pay the sum to the Marine Conservation Society, as determined by an Enforcement Undertaking accepted by The Environment Agency

Material footprint in Scotland 38 per cent higher than global average