Sainsbury's is trialling glass as well as plastic in its Newbury bottle return trial
Sainsbury’s will be collaborating with reverse vending company TOMRA to trial a return scheme for drinks containers in Newbury, Berkshire. This will be the first trial in England to include glass bottles alongside PET plastic bottles and aluminium cans.

Supermarket chain Iceland pioneered the use of RVM technology to recycle plastic bottles, with the first being introduced in a number of Iceland stores throughout May and June 2018.

Truls Haug, UK and Ireland MD for TOMRA Collection, said he hoped the collaboration will show that “three materials can be easily collected in stores with Tomra reverse vending technology”. He added that it would be “an important learning [sic] for retailers and consumers as we move towards an all-inclusive deposit return scheme in the UK, starting with Scotland.”

Sainsbury’s inclusion of glass in its RVM trial comes at a significant time during the wider debate around a national deposit return scheme (DRS). The UK Government has confirmed plans to bring in a DRS for England and Wales by 2023 (with Northern Ireland most likely following suit), which would see consumers pay an added charge on drinks containers that could be recouped through an RVM or other means. The Scottish Government is already moving ahead with its own DRS plans, likely to come into effect in 2020.

While the wheels have been firmly set in motion, there is as yet no consensus around what sort of materials should be included – whether an ‘all-in’ model, which would accept a wide range of containers of all materials and sizes, including glass, or an ‘on-the-go’ model that would focus on smaller containers more commonly purchased out of the house.

Scotland’s planned DRS will follow the ‘all-in’ model, with a 20 pence deposit covering all containers above 50 millilitres (ml) and up to three litres in size, made from aluminium and steel, glass or PET plastic.

Resource efficiency organisation Zero Waste Scotland, which is working with the Scottish Government to develop the DRS plans, recently surveyed householders in Scotland about the inclusion of glass in the scheme. The poll, conducted by YouGov, asked 1,019 adults whether they thought glass bottles should or should not be included in the DRS. 85 per cent of respondents said that glass ‘definitely should’ or ‘probably should’ be included.

Zero Waste Scotland said the scheme could increase glass bottle recycling rates in Scotland from the current 65 per cent to 90 per cent, generating an addition 1.5 million tonnes of recycled glass for Scottish industry over the next 25 years and with a related reduction in carbon emissions of 1.2 million tonnes of CO2 equivalent (CO2e) during that time.

“People in Scotland want glass to be included in Scotland’s Deposit Return Scheme as part of ambitious action to protect our environment,” commented Jill Farrell, Zero Waste Scotland Chief Operating Officer. “The carbon emissions savings make it clear that they are right. Every bottle recycled rather than sent to landfill means carbon savings. At a time of a climate emergency, this is an unmissable opportunity to cut tens of thousands of tonnes of carbon.”

Previously released figures suggesting that the scheme could have the potential to reduce the country’s litter by 90 per cent. 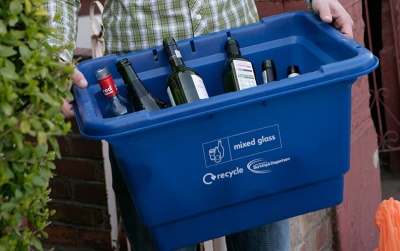 Could including glass in a DRS impact kerbside collections?
Looking at the rest of the UK, former Environment Secretary Michael Gove and Minister of State Thérèse Coffey both gave their backing to the ‘all-in’ model; Gove stated it would “give consumers the greatest possible incentive to recycle” and Coffey praised its ”straightforwardness” for consumers.

Local authorities, however, have reservations, fearing that the introduction of an ‘all-in’ DRS would divert valuable materials, including glass, away from kerbside collections, depriving councils of revenue from materials that are sold on to markets.

The Local Authority Recycling Advisory Committee (LARAC) has said it instead supports an ‘on-the-go’ model, with deposits placed only on bottles and containers smaller than 750ml and sold only in single units, therefore lessening the impact on household recycling and kerbside collections.

British Glass, the trade body for the glass industry, wrote an open letter to the Scottish Environment Minister Roseanna Cunningham to say that glass should not be included in the DRS, fearing that having two separate recycling systems would lead to consumer confusion and disrupt the success of local authority glass recycling to date. The group also said that the relative weight and low value of glass would increase the costs of sorting DRS material by more than £25 million a year.

Interestingly, 86 per cent of respondents to the UK Government’s first consultation on a DRS said they would like to see all materials included – but 73 per cent said they would prefer glass bottles to be refilled through the scheme, rather than recycled, cutting down on waste altogether.

DRS: A whole can of worms
By
Rick Hindley
| 26 July 2019 |
Add a Comment
Rick Hindley, Executive Director of Alupro, the Aluminium Packaging Recycling Organisation, gets his teeth into the issues surrounding deposit return schemes and their impact on aluminium can recycling.

Industry says DRS must form part of wider waste strategy
By
| 29 April 2018 |
Add a Comment
The announcement this morning (28 March) of plans to introduce a deposit return scheme for drinks containers in England has been hailed as a victory by plastics pollution campaigners, though many within the waste and resources industry have called for caution regarding implementation.

Coffey dismisses local authority concerns regarding ‘all-in’ DRS
By
Lidia Creech
| 18 July 2019 |
Add a Comment
Resources Minister Therese Coffey said that there was “no threat to the sustainability of kerbside collections” from a deposit return scheme as she backed an ‘all-in’ model at an evidence session of Parliament’s Environment, Food and Rural Affairs Committee.

Glass should not be included in Scottish DRS, says trade body
By
Imogen Benson
| 29 August 2019 |
Add a Comment
The trade body British Glass has written an open letter to the Scottish Government raising issues with the inclusion of glass in Scotland’s proposed deposit return scheme.