Recycled plastics could provide 71 per cent of the raw material needed by UK manufacturers of plastic packaging and products, according to a new report by environmental think tank Green Alliance.

The report, released today (14 June) by Green Alliance for business group the Circular Economy Task Force and focusing on plastics, steel and critical raw materials, argues that the government’s resource strategy is over-reliant on recycling targets, which simply ‘push’ material into the waste management system, with no domestic market for the materials collected to be ‘pulled’ into.

This issue has been brought into sharp relief by the fact that China banned the import of 24 grades of solid waste, including post-consumer plastics and mixed papers, at the start of the year. The ban sent shockwaves through the UK recycling industry, given the UK’s reliance on sending waste to China – about 494,000 tonnes of plastics and 1.4 million tonnes of recovered paper was sent to China every year from the UK.

In the UK, currently only a third of plastics are collected for recycling, and only nine per cent of all plastics are recycled domestically. A new report shows that developing secondary plastic market could lead to recycling an additional two million tonnes of recycling in the UK and stimulate demand for its use in domestic manufacturing.

The report also argues that focusing solely on recycling targets for plastics is problematic because they only stipulate how much must be collected, not used, meaning there is less incentive for the materials to be collected in a usable condition. Because so much of the UK’s collected materials are either too contaminated to be used domestically or exceed existing domestic capacity, two thirds of plastics are exported, with no guarantee that they will be recycled.

This leads to a catastrophic waste of valuable resources – £1.7 billion worth of plastics, food and electronics are lost to the UK economy each year due to the lack of domestic recycling – and serious pollution problems. Market failures have then led us to rely almost solely on virgin materials, negatively impacting upon the environment, industry and economy.

The report focuses on the negative economic effects caused by the reliance on recycling targets, and argues that government intervention and changing the market framework to incorporate both ‘push’ and ‘pull’ measures would have significant benefits. Reasons for such a framework change include:

The report also recommends three significant new measures to run alongside recycling targets, ensuring that much more plastic is recovered in the UK and ‘pulled’ as raw material back into manufacturing:

The report recommends that, to ensure a reliable market, long-term strategy should provide certainty for investors, facilitate new collaborative problem-solving, and ratchet up ambition over time.

Libby Peake, Senior Policy Adviser on Resource Stewardship at Green Alliance and author of the report, said: “If the UK wants to lead the world in addressing the global scourge of plastic pollution, that means creating a circular economy at home that allows us to turn discarded plastics back into new products. Just collecting plastic and shipping it abroad doesn’t solve the problem.”

Dr Colin Church, CEO of CIWM, the professional body for resource and waste management, and Chair of the Circular Economy Task Force, said: “There are currently some significant failures, in resource terms, in the way plastics are used and managed at the end of life stage. Tackling this will require action from all of us – designers, manufacturers, retailers, consumers and resource managers. The resource and waste management sector is more than ready to play its part, but it cannot act alone. It needs the right policy framework and the right partnerships to allow it to bring its skills, energy and imagination to bear.”

The report also looks at two other materials: steel and critical raw materials. Steel is responsible for a quarter of global industrial greenhouse gas emissions. The UK uses blast furnaces to create steel, importing 12.3 million tonnes of iron ore, and exports 7.3 tonnes of the material, despite the availability of high recyclable steel on a domestic level. The report’s analysis shows that creating domestic markets would improve economic activity in the UK, reduce iron ore imports by 40 per cent, and cut carbon emissions from steel production by around 30 per cent 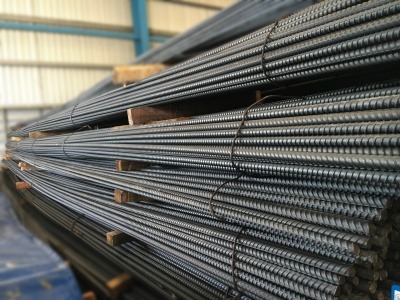 Steel is one of the materials addressed in the report
The report details that the UK imports 100 per cent of its supply of critical raw materials, such as rare earth metals that go into devices like smartphones, which are vital to the manufacture of new low-carbon technologies. Currently, once these materials reach end of life in the UK, they are either exported for recovery abroad or lost in the recycling process. The report’s analysis suggests that if ‘pull’ measures were introduced now, critical raw materials in discarded products – which would otherwise be wasted – could supply over a third of domestic rare earth element demand by 2035.

Peter Maddox, Director of the Waste and Resources Action Programme (WRAP), said: “The time has come for the UK to take more responsibility for its own waste. At WRAP, our mission is to create a world where resources are used sustainably. To make this happen in the UK, we need to design circular systems for plastics and other materials that are sustainable both economically and environmentally. This will require some fundamental changes from all of us. The UK government has shown ambition in its 25 Year Environment Plan and has a great opportunity through the forthcoming resources and waste strategy to ensure that the policy framework enables a thriving and commercially successful UK recycling sector to capture the value from waste here at home.”

Director of Regulatory Affairs at Viridor, Dan Cooke, said: “There’s now a real opportunity for the government to deliver an ambitious strategy, backed up by effective regulation, to stimulate sustained demand for recycled content in the UK. This is absolutely vital to unleash innovation, and to enable further investment in essential recycling infrastructure to supply our industries and economy in the years ahead.”

Finding destinations for our waste

As figures last year showed that UK had been sending approximately 494,000 tonnes of plastics to China annually, the restrictions have had a substantial impact on the UK waste industry. There had been initial fears of significant stock-piling because of the lack of infrastructure capable of processing such amounts of material domestically. In lieu of increase domestic capacity, much of the export waste stream has been redirected to other countries in South East Asia. Indeed, UK exports of plastic waste to Malaysia have tripled since the ban came into action, and that it is now the biggest destination for British plastics.

There have been some moves to increase the UK’s ability to maximise the value extracted from resources and strengthen the market for secondary materials. The European Commission proposed in January that products with higher recycled content could be given lower VAT rates, as an incentive to drive demand in secondary markets. Additionally, in November last year the government’s Industrial Strategy white paper was published, which made commitments to moving towards a more circular economy, and saw the government commit to investing a another £725 million to the previous sum of £1 billion into the Industrial Strategy Challenge Fund, which aims to enable UK-based research organisations to innovate with business and strengthen secondary markets in the UK.

The report, ‘Completing the circle: Creating effective UK markets for recovered resources’, can be read in its entirety on the Green Alliance website.

Could Commission VAT plans provide a boost for secondary material markets?
By
Edward Perchard
| 8 February 2018 |
Add a Comment
Products with high recycled content could be given lower VAT rates to stimulate demand in secondary markets, following a new proposal by the European Commission, says FEAD.

Report estimates that in Kenya 174,000 tonnes of packaging is either taken to illegal dump sites or left in the environment every year.

Indian Government to tighten restrictions on the import of mixed papers

The Indian Government is set to implement a one per cent contamination limit on imports of mixed paper in a crackdown on the import of contaminated and illegal waste.