The Dutch Government’s announcement of new refuse-derived fuel (RDF) import taxes has been met with criticism by the RDF Industry Group, which suggests that the proposed taxes will be ‘counterproductive’ in reducing CO2 emissions.

The proposed taxes, which were announced on Friday 28 June, come as part of the Dutch Government’s climate change strategy, which aims to reduce the Netherlands’ greenhouse gas emissions by 49 per cent by 2030, compared to 1990 levels.

The Netherlands is currently a large importer of foreign residual waste, and is the largest destination for UK RDF, receiving 1.3 million tonnes of UK RDF in 2018. Aiming to reduce the CO2 emissions produced as a result of these imports, the Dutch Government plans to impose an RDF import tax of €32 (£28.75) per tonne and a CO2 tax of €30 (£26.95) per tonne of CO2. 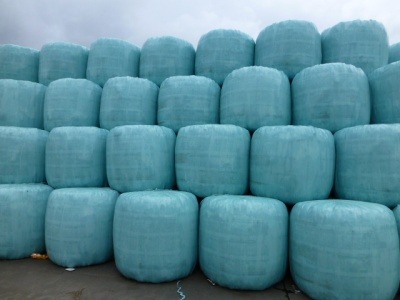 Bales of RDF ready to export.
Image: Indaver
The RDF Industry Group has criticised these proposals, commenting that the Dutch Government has been unable to prove how this import tax would reduce CO2 emissions. The Group claims that the environmental impact would be worsened as a result of these taxes, as there would be a risk of more waste going to landfill.

Robert Corjin, Chair of the RDF Industry Group, commented: “RDF export forms a vital and flexible part of the UK’s waste management system, supporting over 6,800 additional jobs in the UK and saving over 700,000 tonnes of CO2 emissions annually.

“The Netherlands is the largest importer of UK waste, receiving 1.3 million tonnes of RDF from the UK in 2018, powering good quality, efficient treatment facilities, many of which utilise heat offtake as well as electricity.

“The introduction of an import task risks more waste going to landfill in the UK each year, disregarding the waste hierarchy, worsening the environmental impact, increasing costs and putting jobs at risk.

“Furthermore, given the large proportion of waste to Dutch incinerators that comes from the UK, there is also a risk of plant closures and job losses in the Netherlands.”

Dealing with the UK’s residual waste

The controversy over RDF import taxes raises further questions about waste management infrastructure in the UK. Since the introduction of the Landill Tax in 1996, which began to steer residual waste away from landfill, more and more waste has been sent to energy-from-waste (EfW) facilities, with an increase in exports of RDF to incinerators in countries such as the Netherlands.

With the Netherlands currently experiencing an excess in EfW processing capacity, lower gate fees make exporting RDF to the country a viable and cost-effective option for dealing with part of the UK’s residual waste. However, import taxes could make the cost of sending waste to the Netherlands prohibitive, forcing the UK to handle more of its residual waste domestically.

There has been fraught discussion over whether the UK has the capacity to deal with its residual waste, with conflicting reports offering varying predictions of the future of waste management.

In August 2017, Eunomia Research and Consulting predicted that the UK would reach overcapacity in its residual waste infrastructure by 2020/21. The consultancy stated that this could limit the amount of waste going for recycling, as recyclable waste could be diverted to incinerators to make-up the shortfall.

However, waste management company SUEZ‘s ‘Mind the Gap, 2017-2030’ report, which was released in response to Eunomia’s claims, estimated that there will be a UK treatment capacity shortfall of 2.4 million tonnes in 2030 due to the shortage of incineration plants. With SUEZ’s report starkly opposing Eunomia’s forecast, there is clearly a lack of consensus over the future of UK residual waste management.

The perpetual uncertainty of Brexit creates further potential problems for the management of the UK’s residual waste.

Although UK exporters currently pay no tariffs on the export of waste to Europe, this may change with a ‘no deal’ Brexit, which could put limitations on how much residual waste can be sent to incinerators abroad. Placing strain on the UK’s waste management infrastructure, a ‘no deal’ Brexit could result in the stockpiling of waste, as well as increased landfill use.

In January, Environment Secretary Michael Gove outlined the potential disruptions to waste exports, revealing Defra preparations for the stockpiling of waste in the event of a ‘no deal’ Brexit. The government has also advised waste exporters to take precautionary measures, such as reviewing their own storage capacity, warning that they could face delays at container ports if the UK leaves the EU without a deal on 31 October 2019.

The Netherlands’ proposed import taxes have underlined the UK’s dependence on exporting their RDF waste, serving as a harsh reminder of the disruptive impact that Brexit could have on the UK’s waste management.

Government warns waste exporters of ‘no deal’ Brexit port disruption
By
Lidia Creech
| 26 March 2019 |
Add a Comment
The government has warned waste exporters to expect delays at container ports such as the Port of Dover in the event that the UK leaves the EU without a deal, and says businesses should seek ‘alternative’ export, recovery or disposal routes for their waste.

Gove raises prospect of waste stockpiling in the event of ‘no deal’ Brexit
By
Lidia Creech
| 29 January 2019 |
Add a Comment
The Environment Secretary Michael Gove has outlined Defra’s preparations for the stockpiling of waste in the event of a ‘no deal’ Brexit in a letter to Lord Teverson, Chair of the European Union Energy and Environment Sub-Committee in the House of Lords.

Exports of RDF reach 215,000 tonnes
By
Annie Kane
| 6 July 2015 |
Add a Comment
The rising cost of landfill disposal has been a main contributing factor to the 'sudden emergence' of the English RDF export market, according to the Environment Agency.

The argument over the future of the UK’s residual waste treatment capacity has reopened today, after the ESA published a review of previous reports and reiterated the prediction that six million tonnes of residual waste will have nowhere to go in the UK by 2030.

The Environmental Services Association has called for the UK and EU authorities to ensure the trade of waste materials continues with as little disruption as possible post-Brexit, in a joint statement with the Dutch Waste Management Association.

A planned £240-million energy-from-waste (EfW) plant in County Antrim, Northern Ireland, will not have enough waste to feed it, according to a new report commissioned by campaigners.

Local authorities and waste management contractors in Scotland are not adequately prepared for its upcoming landfill ban, according to a Scottish Government report published today (24 April).