Thornton’s Budgens has introduced its ‘Unpackaged’ range of 200 plastic-free products in collaboration with environmental campaign group A Plastic Planet.

Research conducted last year revealed supermarkets contribute an estimated one million tonnes of plastic waste annually, and if the UK is to reach its goal of eliminating avoidable plastic waste by 2042 as set out in the government’s 25 Year Environment Plan, action needs to be taken by organisations and companies across the country. 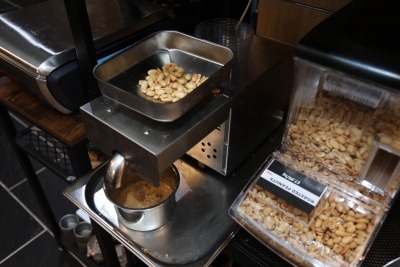 With this in mind, and in a bid to slash plastic pollution, Thornton’s Budgens in Belsize Park, North London now sells loose pulses, beans, grains, and seeds as well as allowing customers to fill up reusable glass jars with peanut butter, milk, and orange juice. Other plastic-free products available include loose soaps and refillable shampoos and shower gels.

Visitors to the store will also be able to choose from an extended range of vegan and gluten-free foods packaged in plastic-free materials and can purchase ethical Fairtrade coffee served in plastic-free cups.

The zones signified Thornton’s Budgens joining other stores making the move towards plastic-free shopping, such as Dutch supermarket chain Ekoplaza, which launched a plastic-free aisle in one of its Amsterdam stores in February 2018.

In March this year Thornton’s Budgens reported a four per cent weekly sales increase on the back of the introduction of the plastic-free zones, highlighting its popularity and consumers’ increasing concerns over climate change.

Andrew Thornton, founder of Thornton’s Budgens, believes the move is set to be replicated by even more supermarkets across the world. He said: “Last year we were blown away by the international reaction when we launched our Plastic Free Zones. The new Unpackaged range represents the evolution of this.

“Our shoppers love our plastic-free packaging. But this is just the beginning. There is no end to our plastic-free ambition. I passionately believe the future of supermarket shopping in the 2020s will be without the toxic material that has done such damage to our planet and ourselves."

A Plastic Planet Co-founder Sian Sutherland added: “We are very proud of our partnership with Thornton’s Budgens. It has consistently proven that selling plastic-free is not just good for the planet but good for business.

“People finally have real choice now and they are voting with their wallets here. After all the pledges and plastic promises from many of the larger supermarkets it is great to work with a leader who believes in people, planet and profit – in that order.”

The Thornton’s Budgens Belsize store aims to stock 3,000 plastic-free products by the end of the year.

Read more about A Plastic Planet on the group’s website.

Mobile plastic-free supermarket aisle to tour Europe
By
| 28 June 2018 |
Add a Comment
The ‘Mobe-Aisle’ was launched in The Hague by Ekoplaza and A Plastic Planet, designed to promote a plastic-free way of life.

Four-in-five people in Britain are concerned about the amount waste produced in the UK, a new poll has revealed, as the tenth annual Zero Waste Week kicks off.

What should you do with garden waste during lockdown?

With waste services experiencing heavy disruption across the country during the Covid-19 outbreak, UK households are being encouraged to start home composting during lockdown. Resource has compiled some tips, marking International Compost Awareness Week (3-9 May), to get you started with home composting, creating good habits for the pandemic and beyond.

Perth, Leith and central Edinburgh have been selected as the locations for the latest round of Scotland’s Zero Waste Towns project and will share nearly £900,000 of funding to further Zero Waste principles in these areas.