A new zero waste hierarchy for the circular economy

Circular economy network Zero Waste Europe (ZWE) has developed a new waste management hierarchy that it says puts the focus on resources instead of waste. 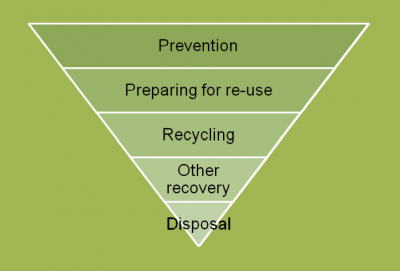 The traditional waste hierarchy, as set out in the 2008 EU Waste Framework Directive
Source: gov.uk
The traditional waste hierarchy is a tool that lists methods of waste management in order of their impact on the environment in a simple diagram. The current waste hierarchy was introduced in the 2008 EU Waste Framework Directive, which sets out the basic definitions of concepts and principles involved in waste management, listing prevention at the top (most preferable) to reuse, recycling, recovery and then disposal at the bottom (least preferable).

However, ZWE is calling for an updated model that would ‘change the mindset from waste management to resource management.’ The organisation states: ‘The driving force of the hierarchy should be not only the safe disposal of our waste but also to ensure that the value of our resources is preserved in the economy for the new generations.’

The new model proposed by ZWE focuses more strongly on keeping resources in use for as long as possible. Therefore, the top two levels focus on ‘products’ not waste, expanding the ‘prevention’ level of the traditional hierarchy out into ‘Refuse, rethink, redesign’. This encapsulates anything that stops waste from being produced, from behaviour change to prevent consumption of single-use items, to rethinking business models to make them waste free by design. This, ZWE says, should be the central priority of economic and environmental EU policies and funding.

The second level, ‘Reduce and reuse’, focuses on keeping used products in use and preventing them from becoming waste, while the third level, ‘Preparation for reuse’, refers to taking waste products and refurbishing them so that they can become usable again. Level four mirrors the traditional hierarchy, with recycling, composting and anaerobic digestion the ideal ‘last option’ for keeping materials in use.

At level five, ZWE prioritises ‘Material and chemical recovery’ over simple energy recovery – this places more of a focus on retaining materials and resources, rather than converting valuable material into energy through, say, incineration.

Finally, at the bottom of ZWE’s hierarchy are disposal options, with residuals management the last option for the waste that is left over after all valuable materials have been reclaimed.

Last year, EU member states signed off on the Circular Economy Package (CEP), a suite of new laws designed to make a more resource efficient Europe. Not only does the CEP set new recycling targets for member states – 65 per cent municipal waste recycling by 2035 – it turns the EU’s focus firmly towards a circular approach, seeing waste first and foremost as a resource. The text of the CEP states that members should be looking to move up the waste hierarchy, noting that ‘waste prevention is the most efficient way to improve resource efficiency and to reduce the environmental impact of waste.’

However, Joan Marc Simon, ZWE’s Executive Director, commented: “The EU knows how to manage waste, but not how to manage resources. The newly elected Commission and Parliament should propose a whole new set of legislation with the legal and economic incentives for products and packaging to be designed not to generate waste in the first place.”

Simon continued: “We need new tools for the new times, and the Zero Waste hierarchy we propose is a tool that sets the right priorities to achieve Europe’s circular economy goals.”

Collecting knowledge: Spreading circular economy best practice in Europe
By
Edward Perchard
| 16 February 2018 |
Add a Comment
If we are to create a circular economy, everyone needs to be on board. Resource looks at how Zero Waste Europe is spreading best practice across the continent, and how lessons for a greener future already exist, they just need to be accessed.

Countries need to become circular to avoid climate change, says report
By
| 22 January 2019 |
Add a Comment
The Global Circularity Gap Report 2019 states that only nine per cent of the world’s natural resources are being reused – and governments must drive changes in unsustainable patterns of consumption to avoid global warming.