A splintered collection market, and landfill-friendly policy has put the green image of New Zealand at risk, but a new government and new thinking is offering fresh shoots of hope for a national turnaround. Ed Perchard reports

Think of New Zealand and the mind travels to lush green hills, dramatic mountain scenery, and maybe orcs if you’re a Tolkien fan. But while our images of the country usually focus on the environment, a lack of governmental interest and a collection market battle between the private sector and councils has seen its recycling rate top out at 28 per cent. However, change could be on the horizon.

Policy bods in the UK have often pointed to pay-as-you-throw as the key to the next step-change in recycling performance by putting the financial onus on residents to maximise their recycling, but New Zealand is an example of why mixing and matching such systems can lead to trouble. There, territorial authorities (TAs – which comprise 13 city councils and 53 district councils) can choose whether resident funding comes through ‘rates’ (their term for council tax) or through paying for each collection using bags or tags to attach to bins; some, like Auckland, even use both systems within their area. 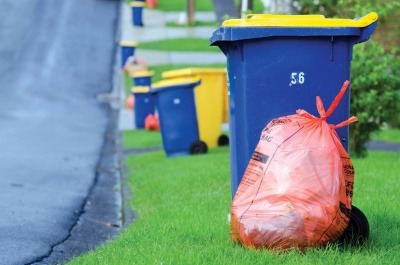 Paying for individual collections (only applied to waste going to landfill, with recycling staying in the rates) has the positive effect of incentivising reduction and making residents wary of throwing out materials that could be recycled, but charging in this way also puts the collection onto the open market, meaning private waste companies can undercut council collections by providing larger wheelie bins that often take all materials co-mingled, made easier by the fact that these companies also own the majority of waste disposal options. Come bin collection day, it is not uncommon for roads to be full of a myriad of different collection vehicles.

Though it is larger than the UK in area, New Zealand has a population of just 4.5 million people, much of which, because of the aforementioned mountains and volcanic landscape, live clustered together, with almost nine of every ten based in an urban area.

A third of the population live in Auckland, New Zealand’s largest city, where Parul Sood has led waste strategy since 2012. Sood says that Auckland Council has managed to maintain a “quite good” market share in the half of the city that pays per collection, though in 2014 the New Zealand Herald claimed that the council only oversaw ‘about 17 per cent of the region’s rubbish collection and processing’ (councils offer no services for commercial waste collection). Some councils have even had to abandon their collection model altogether after private competition gave them an unsustainable market share. “All the 2008 Waste Minimisation Act requires of local government is that we ensure there is effective and efficient waste management and minimisation services in the country,” says Sood. “So it’s not prescribing that services have to be delivered through local government but we just have to ensure that they exist.”

Since 2012, TAs are required to create new Waste Management and Minimisation Plans every six years, but despite the best efforts of local government, the erosion of control over the waste streams has limited their impact. A waste assessment published by Auckland Council last year in preparation for a new plan this year estimated that around 50,000 tonnes of kerbside domestic waste in Auckland is collected by private operators, highlighting one of the key issues with the fractured collection market: nobody quite knows how much waste there is. And if you don’t know that, how can you begin to work out how to reduce it?

That is something that is being pushed by TAs as they attempt to re-energise national policy. After the incumbent Labour Government was ousted in 2008 (shortly after introducing the Waste Minimisation Act, which brought in the waste levy and requirement for minimisation plans), the new regime ushered in what Duncan Wilson, Head of Eunomia Research & Consulting’s New Zealand office, calls “a large period of inaction” that lasted until a new government, a minority coalition government consisting of the Labour and New Zealand First parties with support from the Green Party, took over in October 2017.

The new government, headed by 37-year-old Prime Minister Jacinda Ardern, has pledged to drive change and embrace a low-carbon and resource efficient economy, and the TAs, assembled by the TA Forum organised by WasteMINZ, the waste industry’s trade association, have developed a Local Government Waste Manifesto. Sood, who chairs the TA Forum, explains: “We wanted to provide the government with what the key priorities for us were before they launch into what they might do. For Auckland, for example, we are working towards a zero waste target by 2040, and so are other cities, so if you want to get there then you actually need to make some policy decisions at national level. You can do stuff locally or regionally, but there is a lot that needs to be driven nationally.”

The manifesto provides five key policy points, one being the creation of a National Waste Data Framework that will mitigate some of the issues with quantifying and tracking waste. “If you leave getting data to different councils sometimes they tend to just do it their own way and there’s no standardisation. We’re asking that the government actually sets that and makes it mandatory to actually provide that data.” Auckland has a waste bylaw that means all operators must be licensed and provide data in terms of tonnage and details of materials. “But not every council can have that and it depends on the local political appetite. If it’s national it takes that away, it takes it up a level which means it’s much easier for everybody to understand what is happening with waste in the country, it gives you better information to plan and to develop infrastructure or markets.”

There’s also the matter of the waste levy, a tax on certain waste going to landfill, half of which is paid to TAs to improve waste minimisation in their areas. The Waste Minimisation Act introduced the levy, and set a rate of $10 per tonne. This rate has not changed since its introduction in 2008, and compared to the UK’s Landfill Tax – £86.10 per tonne in 2017 – it seems a paltry deterrent. As around 70 per cent of the country’s waste is currently landfilled (there’s no large-scale energy-from-waste treatment at present), it is also hindering investment in alternatives.

Much of the household-derived landfilled waste comes in the form of food waste, which is only collected in a few TAs as the cost of finding alternative treatment vastly outweighs the cost of landfilling. A report by Eunomia found that by increasing the levy to varying degrees, making it applicable to more waste (at the moment it only applies to the 20 per cent going to ‘Tier 1’ landfills) and possibly adding an additional incineration levy, the country’s recycling rate could shoot up from 28 to 60 per cent by 2024, a massive sea change in sustainability that would also require more circular practices to be introduced, infrastructure investment and job creation.

Wilson says: “The recommendations are all possible within the current legislation and the cost of implementation can easily be funded through the increased levy income.” Sood agrees: “If you have the levy working for you, you can invest that money into infrastructure that helps the country. So not infrastructure for disposal but infrastructure for diversion... The government needs to look at the waste levy and say how do we make that shift to having economic development through diversion and not just straightforward management of waste.”

There is definitely an appetite among both local government, the private sector and the general public. Auckland is one of the lead cities in the C40 Cities’ Waste to Resources Network, grass-roots reuse projects are plentiful and demand is growing for a deposit return scheme to be introduced. Residents are also clued up on the difference between plastic polymers, with recycling bins indicating which numbers they will accept and consumers well-versed in looking for labels. “It’s very much bottom-up”, says Wilson. “There’s not much coming from the top in terms of drivers, but communities like to think of themselves as clean and green.”

This article was taken from Issue 92

The country needs to do something soon to recover more of its resources. New Zealand is situated some 900 miles from Australia, with only a few Pacific islands closer. This means that, barring the long- distance export of materials, it is on its own. Says Sood: “[New Zealand’s size] has been an issue in terms of economies of scale and that’s why we would choose to send resources to China or any Asian market for reprocessing. But with what’s recently happened with China, we have to think of more sustainable markets closer to us and see what we can do within New Zealand and also Australia, so that can definitely be a problem because it is a smaller country and you have to make these things work economically.” In 2016, according to the Ministry for the Environment’s figures, New Zealand sent $8.2 million (£4.25m) of plastic and $9.6m (£5m) of unsorted paper to China, a destination now mostly closed to those materials, so finding domestic solutions to this waste (and helping councils fund them through an increased levy) is necessary.

Work is already underway. Two private sector market leaders, Waste Management and Envirowaste, are both owned by Chinese infrastructure companies and are keen, says Wilson, to introduce alternative domestic technologies. The country’s first PET recycling plant was opened by Flight Plastics in Wellington last year, and can take around half of what the country produces.

Industry and local government are ready to work to bump up New Zealand’s meagre recycling rate, but to bring a truly national improvement the vacuum of government must be filled. Sound familiar?