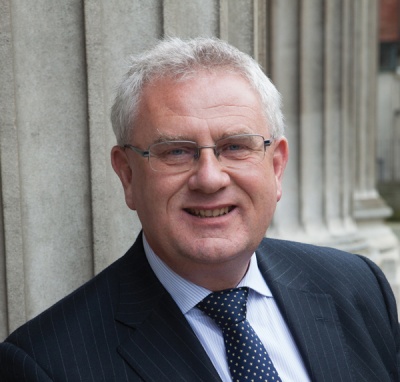 For many of us in the waste and resources industry, Steve Lee has become as much of an institution as the organisation he’s headed for the past 13 years, the Chartered Institution of Wastes Management (CIWM). During that time, Lee has been an ever-present speaker and commentator, and never one to shy away from speaking truth to power, but he will be stepping down as Chief Executive of CIWM at the end of this year after an impressive 35 years in the industry.

Following university training as a hydrogeologist and some time working in a fading mining industry, Lee realised “there was more than one industry trying to stop water getting into big holes in the ground” and cut his waste management teeth in the West Midlands. It’s an area he describes as suffering “250 years of abuse and waste disposal willy-nilly”, something he worked to address in the four years he spent at the waste department of the West Midlands County Council before moving on to Leicestershire County Council and eventually the Environment Agency (EA) when it formed in 1996. He initially served as the new environmental regulator’s Midlands Regional Waste Manager, later stepping up to the national position of Head of Waste Policy, or as he calls it ‘Mr Waste’, before joining CIWM as CEO in 2003.

Lee came to waste management at a time when a “revolution in the type and quantity of waste” and an “explosion of packaging” meant larger volume, higher complexity waste had suddenly become the norm and an increasingly affluent society saw an increase in food waste. Despite these changes, he says councils were still using the method of “finding a hole in the ground that [was] reasonably far removed from where people live and filling it up”.

During his time as head of CIWM, though, he has aimed to change these practices by calling for a modernised industry and a change of focus from waste management to resource management. He refers to the coming “resource revolution” and claims the next step will involve “not letting waste become waste in the first place”, a step beyond the circular economy: “It’s not just about more recycling, it’s not just about whacking up the numbers in the packaging producer responsibility scheme”, he posits. “It’s about thinking about everything from design and manufacture through to retail and use, making things last longer.”

The idea that all the players in the whole supply chain or, better yet, resource cycle need to work together is increasingly accepted in the industry. And indeed, teamwork is something that seems to mean a lot to Lee, perhaps inspired by his love of Leicester City Football Club, the underdog that confounded superstar teams to win last year’s Premier League and prove that a good unit can be more than the sum of its parts. This is a concept that Lee sees spreading to our own industry and embodied in CIWM’s being: “In the last five years, organisations right across the industry have recognised that they work better together. Partnership has become a by-word for how we make things happen these days, and CIWM has got some extremely valuable partnerships across the industry. These allow CIWM to make sure that we keep the flow of information up to our members so they do recognise the world is changing. If we are anything, we are a body of knowledge, we are what’s in the heads of our 6,000 members, so we act as a conduit back for them.”

Lee admits that another driver behind some of the collaborations that the organisation is involved with – including the pan-industry Trade Associations Group and the RWM ambassadors programme – has been the realisation that “influencing upwards into government and through government into Europe has gotten harder”. Partnerships such as those with the Waste Management Industry Trade and Advisory Board (WAMITAB) and the Trade Associations Group, have been formed to “identify top line issues” including waste crime and the need for reliable data to try and set the agenda for the future: “We all agree that these are fundamental for the future of our business and how we help our customers.”

Some relationships, such as that with the Environmental Services Association (ESA), were relatively easy for CIWM to form as the organisations have so much in common, Lee says: “It took us almost minutes to identify really high-level issues that we realised we had to jointly push for. When we asked ourselves where do we disagree, where do we want to scratch each other’s eyes out, it’s almost never or with vanishingly small usually technical issues.” Other types of partnership that he claims will change how the industry works are those with retailers, manufacturers and designers, collaborations he says didn’t really exist 10 years ago: “We’re recognising now that we need to forge new relationships across and around the materials cycle, it’s just starting to happen. We’re going to need to forge new partnerships – in 10 years we will be working in different ways to how we’ve worked for the last 10 years.”

Given his pro-partnership attitude, it is perhaps not surprising that he has mixed feelings about the waste policy separation between regional UK governments and admits the “speed and relentless direction” of the separation has taken him by surprise. While Lee thinks that UK governments have done “fantastic work” (specifically picking out Scotland and Wales for praise), he believes that the waste and resources industry benefits from continuity: “A broadening of the gene pool of ideas is always good, people can learn off each other. But the downside to [devolution] is that as an industry we’ve prospered from having policy continuity right across the UK and at the minute the differences are starting to open up between the four countries. There’s some fantastic thinking that’s been turned into performance in Wales particularly in the area of recycling, and a lot of very impressive circular economy based thinking in Scotland, less so in England.”

His love of continuity also includes consistency within government, as he adds that the quick succession of English waste and/or resources ministers has been one of the industry’s “biggest weaknesses”, comparing their (lack of) effectiveness to the positivity of Richard Lochhead, who served as Scottish Cabinet Secretary for Rural Affairs, Food and Environment for nearly a decade – from 2007 until this summer. According to Lee, Lochhead’s lengthy tenure gave Scotland policy continuity, which helped the country and the industry enormously as “people knew where he would be coming from”. He also thinks that the UK government’s waste management thinking is “a little bit outdated” and that it’s “unlikely” that England will meet the EU recycling target of 50 per cent by 2020 without “all sorts” of interventions to make it happen. These include an updated English waste and resource strategy, better support for local authorities and driving efficiency through former Resources Minister Rory Stewart’s erstwhile pet project on collection harmonisation and consistency. He adds: “We need to keep an open mind to all sorts of things including incentive schemes, new forms of extended producer responsibility, big ticket ideas, that to be honest with you have been on hold in England anyway for some years now.”

This article was taken from Issue 85

That is, of course, if meeting EU 2020 targets is still on the cards after the Brexit vote. According to Lee, the break up of the UK-EU partnership was not what many CIWM members wanted, and he worries it may cause a “slow-down or reversal” of recent improvements to the industry due to “financial, legal and performance uncertainty”. Although he believes EU membership has been “good for what the environmental movement and industries have wanted to achieve”, he is certain that industry members must now work closely together for the waste industry, which was generally not talked about in run-up to the referendum, to influence the future of a non-EU Britain: “More than ever now, we need forward-looking strategies across the UK to support investment and performance in this sector. There has never been a more important time for our industry to work together and to use our body of knowledge and expertise to help influence and deliver a new environmental vision for our country.”

Speaking about the post-Lee future of CIWM and the long-term direction for the industry, Lee says he’s “leaving CIWM at a point where the most important and exciting period is about to happen”. He believes the industry as a whole needs to “keep the momentum up” to help everybody else to be more resource efficient, although he admits this will be difficult in the face of short-term problems such as global markets, political changes and changes in public opinion.

When he steps down as CEO the CIWM team will lose its star player (though it will gain one of those civil servants Lee has praised in the form of Colin Church), but Lee is determined to find opportunities to remain in the industry as he feels there are things he can continue to offer to the waste and resources sector. As Lee concludes: “This is the world that I know, this is the world that I’m excited by. There’s a certain amount of satisfaction of growing potatoes and learning how to play badminton, but I can’t see me dropping out of this business, it’s too important, it’s too exciting and interesting. This isn’t the last you’ll see of Steve Lee.” And with the recent announcement that he will be staying on as the head of Resources & Waste UK (R&WUK), a partnership between CIWM and the ESA intended to be ‘a single voice championing the future of resource management in the UK’, he’s already proving good to his word.