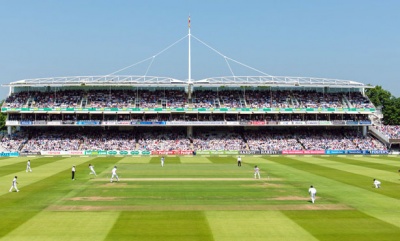 Photo: Lord's
Lord’s has announced that it has become the first cricket ground to be run on 100 per cent renewable energy and redevelop waste facilities in the ground, after statistics and a report from the Climate Coalition action group highlighted the serious impact of climate change on the sport.

Lord’s, the iconic home of cricket, has taken action on sustainability with its recent spectator stand redevelopment, making it the first cricket ground in the country to run completely on renewable energy. The Marylebone Cricket Club (MCC), which owns the ground, signed an agreement with EDF Energy to its electricity consumption to entirely renewable energy sources.

Meanwhile, the brand new 2,656-seat Warner Stand, which is due to open in April, is the next stage in MCC’s environmental strategy, after meeting 2020 emissions targets and reducing electricity use by seven per cent since 2010, this new development. The stand is built using sustainable materials and contains a number of eco-friendly facilities including ground-source heat pumps for heating water, photovoltaic roof panels and a rainwater recycling system.

The stand will also contain enhanced waste sorting and storage facilities, which will reduce the need to collect waste from the stand during the course of a match day. Last year, Lord’s trialled a recycling initiative to capture more single-use plastic cups with specially designed bins.

The announcement that Lord’s has upped its renewable profile comes as the sport faces up to the growing impact that climate change and resulting weather patterns are having on the sport.

Derek Brewer, MCC Chief Executive & Secretary, said: “It is important that all organisations embrace sustainability, and I’m very pleased that Lord’s has become the first cricket ground in the country to run on 100 per cent renewable energy.”

MCC statistics show that severe weather conditions have increasingly been the cause of disruption to games and damage to facilities across England and Wales. In December 2015, Storm Desmond caused more than £3.5 million damage to a total of 57 clubs, mainly in Cumbria and Lancashire.

Furthermore, Corbridge’s historic clubhouse in Northumberland had to be closed following the devastation caused by the storms. Club committee member John Maude said: “It was a huge shock to everybody when the water went over the flood bank. We all felt relatively secure behind the flood bank and we know the Environment Agency had done a lot of work to strengthen that, but we couldn’t predict the water would rise that high.”

The ECB issued emergency funding of over £1 million to clubs affected by floods in 2016, and is anticipating an even greater expenditure in 2017.

Brewer added: “The statistics released today illustrate the effect that changing weather patterns can have on cricket, and the ECB deserve a lot of praise for the support they give clubs across the country that are so badly affected by extreme weather.”

The statistics also indicate that increased rainfall resulted in a loss of fixtures in both recreational and professional cricket.

The effect of climate change on Britain’s well-loved places

The release of these statistics accompanies the Climate Coalition’s annual ‘Show The Love’ campaign, and the release of a report prepared in conjunction with the Priestley International Centre for Climate Leeds University – ‘Weather Warning: Britain’s Special Places. Under Threat’. The report details how extreme weather linked to climate change is affecting some of Britain’s favourite places including vast flooding in Yorkshire farmland, cliff erosion in East Sussex’s Birling Gap, as well as the damage to UK cricket grounds.

The report states that in a recent climate modelling study, researchers found that climate change made the devastating December 2015 floods 50-75 per cent more likely. Stressing the need to end pollution from fossil fuels by the middle of the century, and highlighting how climate change is not only putting coastal communities but also our most loved past times at risk, the report also holds up Lords’s new development as an example of how the UK is spearheading positive change.

Recycling in Wales has ‘out of this world’ potential to address climate change
By
Libby Peake
| 14 September 2016 |
Add a Comment
A new report from the Welsh Government has found that enhancing recycling in Wales could potentially save 86,000 tonnes of CO2 equivalent.

Circular economy ‘an effective climate strategy’, new study shows
By
Hannah Boxall
| 20 June 2016 |
Add a Comment
New research reveals that annual greenhouse gas emissions could be reduced by six per cent globally and by four per cent in the EU

Reducing food waste could mitigate climate change, say researchers
By
Jennifer McDowall
| 7 April 2016 |
Add a Comment
German researchers say that greenhouse gas emissions produced as a result of food surplus have increased by over 300 per cent in the last 50 years.

The Quality Recognition Award winners were announced at the association’s Annual Lecture in London.

Coca-Cola European Partners has announced a solar farm and a commitment to getting 100 per cent of its electricity from renewable sources as it advances sustainability in its UK operations.

Three quarters of the UK public want the government to ensure that businesses produce repairable and recyclable products, while 90 per cent believe that all packaging should be made recyclable, according to a new survey conducted by Cardiff University.

Supermarket retailers will soon be taking salad bags, crisp packets and biscuit wrappers to be recycled in line with WRAP’s UK Plastics Pact