Mayor of London Sadiq Khan is being urged to explore the possibility of incentivising the recycling of plastic bottles after the London Assembly Environment Committee found that the troublesome products make up 10 per cent of all litter found in the River Thames.

The committee’s report into the environmental impacts of plastic water bottles, ‘Bottled Water’, was published today (13 April), and says that finding ways to improve the recycling rate of plastic bottles in the capital and providing alternative drinking water sources for Londoners is essential to preserving marine life and the natural environment of the city.

The report quotes research from Royal Holloway, University of London that found three quarters of the flounder swimming in the Thames had consumed plastic. 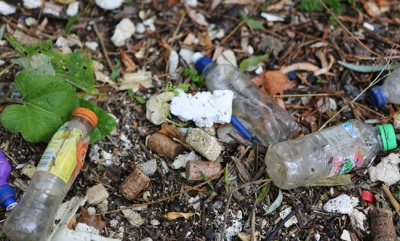 Plastic bottles, particularly water bottles, are blighting the Thames and its banks
Photo: Thames21
“Plastic waste is out of control in London. It litters our parks, pollutes the Thames, harms marine life, and adds waste to London’s landfill sites, which may be full by 2025,” said Environment Committee Chair, Leonie Cooper AM. “We have to turn the situation around.”

“Londoners need an alternative to buying bottles of water - this is a crucial part of the solution. Tap water needs to be more readily available. Secondly, we need to improve our recycling of plastic bottles. Currently, far too many end up in landfill or in the natural environment and London boroughs have some of the worst recycling rates in the whole of the UK.

“Electors heard Sadiq Khan pledge to be the 'greenest Mayor London has ever had’, now it’s time to fulfil that promise by addressing our thirst for plastic bottled water.”

According to the committee, which scrutinises the Mayor’s environmental strategies and looks at what additional measures could be taken to help improve the quality of life for Londoners, London consumes the greatest amount of plastic bottled water per capita than any other British region, and in the UK sales of plastic bottled water have more than quadrupled in the last two decades.

Plastic bottles make up 10 per cent of the litter found in the Thames, and in one day last year over 2,500 bottles were removed from the river by the Thames 21 organisation.

Of these bottles, just under 50 per cent are made up of water bottles, with cola bottles providing 12 per cent, sports drinks 10 per cent and a further 17 per cent being unidentifiable. For this reason, the committee says that action must be taken to provide alternative sources of water to Londoners.

Community water refill schemes, which encourage members of the public to fill up their water bottles for free at participating venues is seen by the committee as one localized and financially viable approach. Subsequently, the report urges Khan to investigate the possibility of installing more water refilling stations on the London Transport Network and look at how Business Improvement Districts could be used to trial potential solutions, as is currently being done with the Square Mile Challenge and coffee cups.

Photo: Victor O' / flickr / Creative Commons
To reduce the amount of water bottles being used, the committee suggests that the Greater London Authority Group should stop selling plastic bottled water in its buildings, a measure that Selfridges and ZSL London Zoo have already taken, providing water drinks in aluminium cans, glass bottles and Tetra Pak instead.

Deposit scheme among solutions to low plastic recycling in the capital

As well as the waste prevention measures suggested by the committee, the report urges the Mayor to explore the feasibility of a deposit return scheme (DRS) in London, with a view to approaching the government for London to be a trial site for a potential nationwide scheme.

The idea of a DRS, which adds a charge to, in this case, plastic bottles which is then repaid when the bottle is returned to a retailer for recycling, as a solution to plastic litter has taken off in the last year or so. Several high profile campaigns, including Sky’s Ocean Rescue and the Daily Mail, have backed the idea and waste management firm SUEZ called the measure a ‘win-win’ for the environment, manufacturers and ordinary households.

The plan for a UK DRS is not without its detractors, however, with several organisations saying that it would harm existing kerbside recycling services, negatively affect small retailers and potentially cause cross-border crime and fraud.

The committee’s report states that with London boroughs returning some of the lowest recycling rates in the country more must be done to ensure the recovery of plastic products. In addition to carrying out a feasibility study of a DRS scheme in London, the report recommends that Khan brings together plastics manufacturers, drinks producers, retailers, local authorities, waste collectors and recyclers to explore solutions to increase recycling.

Responding to the report, a spokesperson for the Mayor of London said: “Sadiq is extremely supportive of initiatives to help boost access to tap water on the go, such as stores and restaurants providing free tap water, and, rather than just a London scheme, believes that Government needs to consider a national deposit-return scheme to encourage the re-use of plastic water bottles. The Mayor’s forthcoming Environment Strategy will include proposals aimed at reducing food and drink waste, including packaging, and increasing recycling rates.”

Previous analysis undertaken by City Hall suggests that a London-only DRS would be not be viable because of the commercial disadvantage it would cause London businesses, the infrastructure costs to a scheme based solely in the capital and the national supply chains of many manufacturers and retailers.

The ‘Bottled Water’ report from the London Assembly’s Environment Committee can be read on the organisation’s website.

Deposits would harm established council recycling collections, says LARAC
By
Edward Perchard
| 12 April 2017 |
Add a Comment
Introducing a deposit-return scheme for plastic bottles in the UK would damage the efficiency of council collections and require a new collection infrastructure to be introduced, according to LARAC.

‘The Story of Plastic’ wins News and Documentary Emmy

The film, which details the full extent of the ongoing plastic pollution crisis, won the award last week

You could bag yourself a recycled plastic rucksack by keeping your eyes peeled during your trips to the beach this summer, thanks to an awareness raising competition from Eunomia.