In a bid to drive up recycling rates, Swansea Council launched its ‘Keep it Out’ campaign – a ban on recyclables in black bin bags and fines for those not recycling correctly. Tansy Dando reports

It is no great secret that Wales has led the way on recycling in the UK, setting ambitious statutory targets towards which Welsh local authorities have made great progress. However, as these rates get higher, each additional percentage point becomes harder to achieve. But, of course, necessity is the mother of invention, and Swansea Council, whose recycling rate has come to a standstill at 62.9 per cent, has taken a novel approach to driving up its recycling rate – banning recyclables from the residual waste stream. 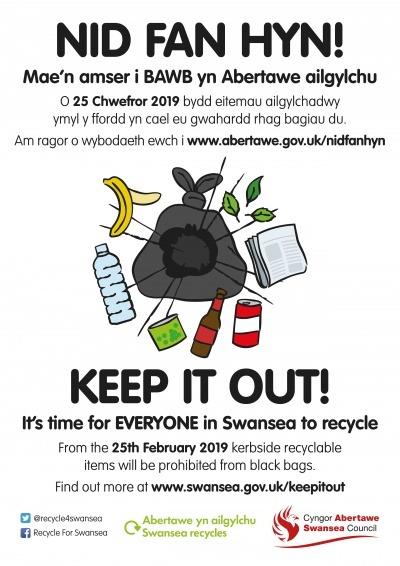 Swansea's 'Keep it out' campaign poster

Following the Welsh Government’s compositional analysis showing that approximately fifty per cent of material in the residual waste stream is recyclable, Swansea’s black bin bags seemed like the natural place to go rooting for ways to kickstart the council’s flagging recycling rate, as well as cutting the £3.5 million per year bill it foots to deal with its residual waste.

The council decided to ban recyclables in black bin bags in February 2019 after ruling out a limit on black bin bags put out for collection to two bags per household and moving to three- or four-weekly residual waste collections.

The enforcement effort – called the ‘Keep it Out’ campaign – sees council workers ensure that recyclables such as paper, cardboard, food waste, cans, glass, and plastic are kept out of refuse by checking black bin bags at the kerbside and providing a continual stream of communications to residents.

“Officers will perform a fairly simple ‘clink’ test,” explained Chris Howell, Head of Waste Management at Swansea Council. “Pick the bag up and shake it to see if you can hear cans and glass. Look at the bag to see whether there are any plastic bottles or paper sticking out. Feel the weight of the bag which could indicate that there is food waste present.”

Residents found with significant amounts of recycling in their general waste bins are approached and offered support, information and any equipment needed from the council. Those who continue to put recyclables in residual waste will be fined up to £100. “There is a four- stage process of letters and notices prior to the issuing of a fixed penalty notice as an absolute last resort,” said Rebecca Tribe, Waste Minimisation, Domestic and Commercial Recycling Team Leader at Swansea Council.

Before putting the ban in place, the council ran an extensive communication campaign for about two months, using a variety of mediums including a council- wide letter drop, radio adverts, social media posts, local group presentations and appearances on ITV News and BBC’s The One Show.

This article was taken from Issue 98

So far, Swansea Council says no major obstacles have been encountered and though there were initial mixed opinions, residents have generally responded well – 86 per cent of respondents agreed with the ban before its implementation – and the ban has been embraced “with energy and enthusiasm” by the kerbside staff involved in the process who have been boosted by the direct positive impacts of their efforts, according to Tribe.

While some complaints have arisen over the nature of enforcement, with some calling it “an invasion of privacy”, Swansea Council has been keen to make it clear that the fines are a last resort. “We will be looking for black bags with significant amounts of recycling, not searching for the odd can or bottle,” Swansea’s Report of the Cabinet Member for Environment and Infrastructure Management stated in December 2018.

Since enforcing the ban, the council has reported “significant behavioural change in the vast majority of residents we have engaged with through the process, which shows that it is working extremely well. Whilst thousands of letters and notices have been issued seeking to persuade residents to stop placing recyclables in their black bags, only two fixed penalty notices have been issued to date.”

Residual tonnages at the kerbside have reduced by about 15 per cent since the ban came into play, equating to around 3,000 tonnes per year, with the council predicting a two per cent increase to its recycling rate.

Councils are often wary of introducing enforcement measures when it comes to waste, fearing how residents might respond but with the right levels of engagement and communications, Swansea may just have provided an example to follow.

Carmarthenshire County Council has announced that it will be delivering food waste caddy liners to homes across the county from the start of October.