A number of countries, including the UK, have refused to publically back proposals for the increased recycling targets and measures that are due to be debated in the European Council in the coming weeks, according to a survey conducted by a group of non-governmental organisations (NGOs). 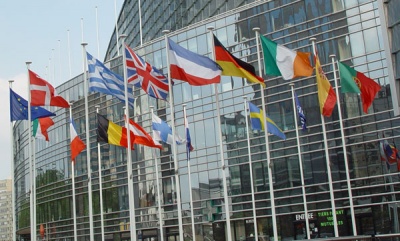 The NGOs, led by the European Environmental Bureau (EEB), Friends of the Earth Europe and Zero Waste Europe, asked each EU member state whether they would support proposals already approved by the European Parliament to raise the Europe-wide recycling target for municipal solid waste to 70 per cent, to introduce a reuse target, and to improve measures on separate collection, producer responsibility and waste reduction.

An approach to these measures, part of the proposed legislative amendments to the EU’s Circular Economy Package, needs to be agreed by environment ministers from across Europe before negotiations between the European Parliament, Council and Commission begin later this year.

The investigation found that a handful of countries (Denmark, Finland, Hungary, Lithuania and Latvia) are set to ‘categorically reject’ higher ambition, while others, including Italy, Sweden, Portugal and the Czech Republic, are thought to oppose plans to make preparation for reuse mandatory and to set new waste prevention targets.

The UK is one of six countries (UK, Germany, Poland, Ireland, Slovenia, and Croatia) that would not share their position with the investigation, which the EEB says highlights ‘a long-standing transparency problem during negotiations between member states’. This, it continues, creates a barrier between national governments and their citizens and ‘is at odds with the progressive and transparent stance adopted by the European Parliament’.

The EEB website outlines whether each member state plans to support each proposal (in this case an increased recycling rate)
Graphic: EEB
Although the government was not willing to reveal the UK’s stance on more ambitious measures, it was reported that when the European Parliament first met in July 2015 to vote on a 70 per cent recycling target for 2030, British MEPs were urged to oppose them. The Guardian reported that the government preferred a greater emphasis on ‘voluntary agreements with industry and incentives to rewards behavioural changes’ – an approach that has been favoured in terms of resource use under recent governments.

Resource Minister Therese Coffey has also expressed some uncertainty about the value of higher targets, telling Parliament’s Environmental Audit Committee that any changes must be “focused on outcomes” and that “we don’t want, just because of some specific rules and regulations, to end up with a perverse outcome”. Coffey has also described the 65 per cent target as “too high to be achievable”.

Scepticism is not exclusive to the UK, with reports last year suggesting that Germany, another of the nations not to disclose its position and one which holds the highest reported recycling figures in Europe ,wanted all recycling targets to be scrapped while an alternative and more accurate recycling data methodology was implemented.

‘Laggards’ winning out in Council position

In contrast, the EEB highlights Greece, Romania and Spain as the ‘leaders’ in calling for stronger support on the measures favoured by the European Parliament, with France, Belgium and the Netherlands also labelled as ‘progressive countries’.

It is, however, the other countries, which the EEB calls ‘laggards’, that are under fire from the NGOs for ‘attacking’ the ambitious reform and risking damage to the development of the circular economy.

It argues: ‘If a regressive position is to prevail in the negotiations, plans to accelerate the transition to a circular economy in the coming years will most likely stall.

‘Recent leaks of the Council’s current common position show that the laggards are winning out, despite higher individual ambition by some member states in areas including recycling targets, extended producer responsibility and biowaste separate collection.

‘At stake is the creation of over 800,000 jobs, one in ten coming from reuse, and €72 billion (£62 billion) a year in savings across Europe. EU countries would also miss the opportunity to avoid over 420 million tonnes of CO2 equivalent, which equates to taking four in 10 cars off European roads.’ 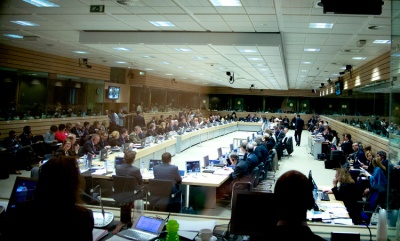 The European Environment Council is to meet next month to discuss legislative amendments
Photo: European Union
Negotiations and public image ‘a different story’

When it published the Circular Economy Package in December 2015, the European Commission proposed a recycling target of 65 per cent. However, calls have been made, and received positively by MEPs, to increase ambition and hasten the transition to a more circular, resource efficient economy.

Indeed, when the European Parliament voted through the measures, the First Vice-President of the European Commission Frans Timmermans welcomed the outcome, tweeting: ‘Thanks to MEPs for this inspiring #circulareconomy debate. The longer we wait and the less ambitious we are, the higher the cost to Europe.’

However, despite strong support from MEPs, it seems that only 10 of the 28 member states back the changes to the recycling targets, with even fewer supporting reuse, waste prevention and packaging proposals.

Commenting on the investigation, Piotr Barczak, Waste Policy Officer at the EEB, said: “We hear every day that governments are committed to reducing waste in order to reap the benefits of the circular economy. But what happens in the negotiations, behind closed doors, is sometimes a completely different story.

“Without higher targets for recycling and binding measures for prevention, which would inject confidence into the market, governments will struggle to find the investment opportunities necessary to trigger the transition to a circular economy. Providing long term ambition and binding requirements is what drives change.”

A map showing each country’s position, along with their current recycling rate and waste generation figures, can be found on the EEB website.

Germany could call for removal of EU recycling targets
By
Edward Perchard
| 16 September 2016 |
Add a Comment
German dissension over recycling targets and methodology could risk further delay to the adoption of the Circular Economy Package.

The partnership will see customers selling pre-owned devices, intended to re-enter the market

CIWM revealed the speaker, adding that the conference will now be free to attend