Jaguar closing the loop on production with recycled car project 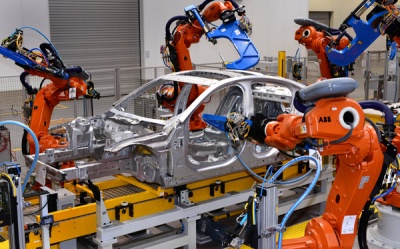 The REALCAR (REcycled ALuminium CAR) project, which has been part funded by Innovate UK, has seen JLR’s 11 UK press shops introduce a system for segregating waste aluminium scrap so that it can be sent back to Novelis to be re-melted into recycled aluminium sheet for use in vehicles.

The 50,000 tonnes that was reclaimed in 2015/16 is the equivalent to almost 200,000 Jaguar XE body shells, and the company says that with the saving on primary aluminium material use, the project has prevented more than 500,000 tonnes of CO2 equivalent from entering the atmosphere.

More than £7 million has been invested across JLR’s Halewood, Castle Bromwich and Solihull press shops to install segregation systems to capture and distribute the aluminium scrap for re-melting, reducing waste, retaining higher quality and value in the material.

Aluminium can be recycled almost endlessly and according to the International Aluminium Institute (IAI) 75 per cent of all aluminium ever produced in still in productive use. Keeping the metal in the production loop lessens the need for primary aluminium production, which uses almost twice the energy of recycling.

As well as implementing new systems for recovering aluminium waste, the project has also seen the development of a recycled aluminium-based alloy, RC5754, which can accept a higher percentage of recovered scrap and can be used by other transport sector producers.

In 2014, the Jaguar XE became the first car to use the high-strength aluminium alloy, which was created by Novelis. The alloy has also been tested and introduced to lightweight aluminium bodies of new Jaguar models.

Following the success of the project, a follow-up project, REALCAR 2, has begun exploring wider recycling opportunities, including recycled aluminium from post-consumer sources

Nick Rogers, Group Engineering Director, said: “Innovation is at the heart of everything we do at Jaguar Land Rover. We are driven by the desire to produce increasingly world-class, light-weight, vehicles, but we also want to be world leading in how we build them.

“Innovative projects such as REALCAR demonstrate our commitment to meeting our sustainability challenges head-on. Its success so far marks a significant step towards our goal of having up to 75 per cent recycled aluminium content in our vehicle body structures by 2020.”

More information about the REALCAR project can be found in a case study developed for the Cambridge Institute for Sustainability Leadership.

The HERU (Home Energy Resource Unit), a new domestic waste disposal appliance found to be less impactful in terms of CO2 emissions than more traditional waste collection methods by environmental consultants Ricardo Energy and Environment, has gone out for technical trials this month.

Can you recycle bike tyres and inner tubes?

Though cycling is seen as the ideal form of green transport, millions of bike tyres and inner tubes are thrown away every year in the UK. Is it possible to dispose of these items in an environmentally friendly way?

Researchers at Lancaster University have developed a new technique for converting coffee grounds into biofuels, drastically reducing the time and energy needed in the process.