Improving recycling rates in flats is a perennial challenge for local authorities, especially in cities where they comprise a high proportion of the housing stock, such as in London, where the recycling rate in some inner city estates is a mere 10.7 per cent, compared to a national average of 44 per cent. 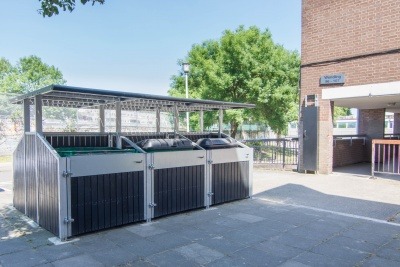 metroSTOR has called for -easy-to-access bin stores to improve flats recycling.
With purpose-built flats making up 37 per cent of London’s residential accommodation, and with this figure expected to climb to 46 per cent by 2030, finding solutions to increasing recycling for this style of property is key to boosting rates in the capital.

Initiatives such as the Flats Recycling Project, led by Resource London and partnered with Peabody Housing Association and eight inner London Boroughs, have identified solutions such as providing more recycling facilities inaccessible locations with much clearer signage and enhanced communication with residents.

metroSTOR has welcomed recommendations made by the Flats Recycling Project and goes on to make its own calls for improvements, including: removing bin chutes to encourage reycling; making recycling bins accessible by placing them with 35 metres of front doors and within 10 metres of the kerbside; at least five metres away from housing to lower fire risks; the use of secure housing to prevent arson, fly-tipping and vermin problems; and clear signage and lighting to make bins as easy to use as possible.

metroSTOR is working with more than 150 local authorities and housing associations with products that boost recycling rates and eliminate cross-contamination, while also reducing fire risk, litter, fly-tipping and anti-social behaviour.

You can find out more on the metroSTOR website.

With 2020 upon us, REPIC CEO Mark Burrows-Smith reflects on the year gone by – and it’s certainly been an interesting one for waste industry stakeholders and producer compliance schemes.

German company Erdwich Zderkleinerungs-Systeme GmbH is working to advance the recycling of waste electrical and electronic equipment (WEEE) around the world, supplying equipment to recycling plants in Hong Kong and Portugal.

North London Waste Authority encourages people to ‘Wise Up To Waste’ and switch to reusable bottles, as new research shows that two-thirds of people say that they now possess one.

A round up of news from the waste and resources sector including funding for community projects in Northern Ireland, ethical business accreditation to a UK mattress company, a charity Christmas jumper swap, and more.

George Monbiot is leading calls for Natural Climate Solutions to combat climate change through the restoration of natural ecosystems in order to draw carbon dioxide out of the atmosphere.

The Malaysian Government has announced that it has returned 150 shipping containers of illegally imported plastic waste to their countries of origin, including the UK.

Cardiff residents that persistently place non-recyclable items in recycling containers face the prospect of a fine and prosecution if they do not heed warnings from Cardiff Council to recycle properly as part of the council’s bid to reduce contamination and increase the city’s recycling rate.

A new report from Dutch social enterprise Circle Economy has revealed that the global economy is consuming a record 100 billion tonnes of materials a year, while the reuse of resources has gone into reverse.