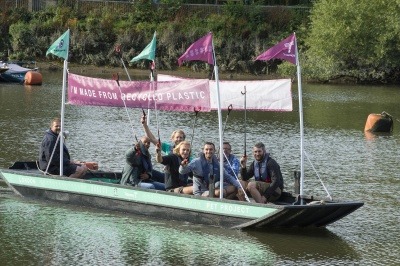 The charity has announced that it is building the third in a series of boats made from a 99 per cent recycled plastic material called Plaswood. The first such boat was launched in November 2017 and named ‘Poly-Mer’, followed by a second boat in August 2018 with a similarly pun-tastic name: ‘PET Project’.

The boats have been used for plastic fishing trips, whereby businesses and schools can help to reduce plastic and other litter in the Thames. Since the start of 2018, Hubbub has held 36 plastic fishing trips around London’s Docklands for schools and businesses; groups aboard Poly-Mer have collected more than 1,250 plastic bottles in that time.

Around 300 tonnes of rubbish is cleared from the Thames every year, and according to researchers at Royal Holloway, University of London, 28 per cent of fish in the Thames estuary have eaten microplastics. In some types of fish, up to 75 per cent had microplastics in their gut, which could have come from a variety of sources – not only from large pieces of waste plastic being broken down but also from small microfibres finding their way into the water system, for instance from clothes washed in washing machines.

Hubbub is now building a third boat with funding gained through the Starbucks paper cup charge trial, which saw 35 Starbucks stores charge five pence extra to everyone purchasing a drink in a single-use cup. The trial, which has now been extended permanently to all 950 Starbucks outlets in the UK, was conducted in partnership with Hubbub and the revenue will go towards extending Hubbub’s plastic fishing project. Further funding has also come from Tideway, the organisation building a new ‘super sewer’, the Tideway Tunnel, under the Thames to intercept sewage discharge from the city’s current system.

The new boat will be available for community groups in four locations around the UK, to be decided through a campaign supported by the Daily Mirror. Each group will have access to the boat for free for one week as part of the Plastic Fishing Tour, after which one of the four successful groups will be selected to keep the boat for good.

Organisations and individuals who feel that plastic waste is negatively impacting their waterways can apply to have the boat visit their town by sharing pictures with the hashtag #PlasticFishing, emailing Hubbub directly or by filling out an application form before 25 January 2019. More information can be found on Hubbub’s website.

Recycled plastic boat to take school children on free waste fishing trips
By
Kate Dickinson
| 5 December 2017 |
Add a Comment
A new campaign from environmental charity Hubbub will educate children about the problem of plastic waste while helping to clear London’s waterways of litter.

What are you wearing? Hubbub launches new campaign targeting microfibre pollution
By
Gethin Roberts
| 7 June 2018 |
Add a Comment
Hubbub’s campaign #WhatsInMyWash aims to raise awareness of how our choice and treatment of clothing contributes to synthetic materials polluting our oceans.

The LGA has called for more manufacturers to provide take-back services for furniture and mattresses after Defra announced that cash-strapped local authorities spent an estimated £57.7 million on clearing up fly-tipping in 2016/17.

Over £300,000 available for litter-fighting projects across Britain

This second round of funding builds on the government’s Litter Strategy for England and seeks innovative solutions to tackle littering.