How appetising is a Full English Brexit for the resource sector?

It was probably the only moment of real levity at the end of what was a depressing and shattering summer for those of us that campaigned hard for a Remain vote in the EU referendum. Yes, it was the moment when the leader of the Welsh Conservatives misread his autocue during his party conference speech and said “Brexit means breakfast”, instead of the even more vacuous mantra of the new Prime Minister, namely “Brexit means Brexit.” Add to that the shifting political sands of what might constitute a ‘hard Brexit’, a ‘soft Brexit’ and even a ‘full Brexit’, as coined by the defence secretary, and one begins to wonder if any of these apparently very clever people in the highest offices of state have any idea at all what they are talking about.

I joke about it, but it is with the hollowest of hollow laughs, as there isn’t really any humour in this sorry situation at all. As the value of the pound falls even faster than some English local authorities’ recycling rates and the hardening messages from many major businesses about the impact of leaving the single market appear to go unheeded, the government appears hell-bent on denying the economic uncertainties and likely negative impact on jobs and growth that any shape of Brexit will bring. It’s equally hard to give credibility to the senior Brexiteers’ optimism that there are world markets just waiting to be captured by British firms, when the self-same people spent the entire campaign promising money to the NHS that disappeared into mythology just as fast as the pound fell. Germany exports four times as much to the rest of the non-EU world as the UK does, and does this perfectly efficiently from within the EU. Facts are lost in the enveloping fog of little- Englandism, xenophobia and British Bulldog baloney that has been allowed far too much legitimation in the post-referendum chaos.

And what of our own corner of the policy world? It’s no surprise that, yet again, environmental concerns do not feature heavily in any of the discourse. However, there are real concerns and no real answers. Defra tell us it remains engaged with the negotiations on the Circular Economy Package as long as we are members, yet its negotiating positions haven’t been very positive anyway, and I’m quite sure we are getting at best a polite hearing and at worst the cold shoulder. Europe can’t even agree anyway on a unified methodology for actually calculating recycling, so the argument over percentage-based targets is frankly absurd. But to change it and shape it well, we need to be in it, and a scenario in which we have all the legislation but none of the say (such as EEA membership) seems even dafter than ‘full Brexit’ (whatever that means)! 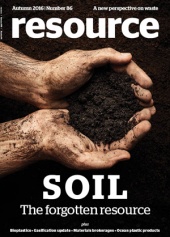 Some are valiantly suggesting there will be opportunities post-Brexit to shape a new British approach to environmental and waste policies. I try hard to buy this argument, but find it a challenge. Most environmental progress in recent decades has come on the back of EU legislation, much of which was opposed by UK industry and government in one form or another – the Landfill Directive being a classic example. Are we really going to rip up the acquis communautaire and indulge in green one- upmanship with our EU neighbours? I doubt it, but would be very pleased to be proved wrong. There are areas where we could indeed make real progress without an EU to drive policy, such as reuse and repair, but the deregulatory character of the current government would need to cut some slack to the arguments in favour of smart regulation for good environmental, social and economic benefits for this to gain traction. I hope that the case for reuse can be made and heard – it would be a glimmer of hope in what may be thin pickings for our industry in other areas.

We also need to make the case again for the role of modern manufacturing, reprocessing and utilising the secondary resources to add economic value, regardless of whatever Brexit scenario we end up with – hard, soft, or full English Brexit (especially if our Scottish friends finally decide they’ve had enough of us and end up choosing the EU ahead of the UK). This time, we need to re-contextualise as part of the government’s intent to develop a new ‘industrial strategy’. This may well present an opportunity and we must try to grasp it.

So, we soldier on through the fog and uncertainty. Whatever happens, I’ll never look at a full English breakfast in the same way again. I feel a new enthusiasm for croissants coming on...

It's still a battle, but thankfully with no bullets
By
Ray Georgeson
| 16 May 2016 |
Add a Comment
Ray Georgeson gives a sideways view on what it means to be in the European Union.

Time for audacious policymaking
By
Ray Georgeson
| 2 December 2015 |
Add a Comment
To say a lot of water has passed under the bridge since my last notes for Resource magazine would be an understatement. Not least of the changes in recent months was the election in May of a majority Conservative government that appeared to take everyone (apart from the Conservative Party) by surprise.

The UK could be heading for a future consisting of increased dangerous chemical use, poorly designed products and less ambitious waste reduction targets if the risks thrown up by Brexit are not properly dealt with, according to a new report by think tank Green Alliance.

MPs have expressed their concern at the future of EU-derived environmental policy in the government’s Brexit negotiations and have asked members of the government to clarify their position.

All areas of environment at high risk of damage due to ‘no deal’ Brexit, says Greener UK

Greener UK states that the ‘increasingly ominous prospect’ of leaving the EU without a deal ‘poses potentially dire consequences for the environment, in the short and longer term’ across all areas of environmental policy.

Environmental laws to be transposed through Great Repeal Bill

The government confirmed through its Brexit White Paper that it plans to transpose all current European environmental regulation into UK law after Brexit.

Avoiding a dog’s Brexit for waste and resources

Libby Peake, Senior Policy Adviser at the Green Alliance think tank, says Brexit talk must turn to action if we are to avoid an environmental policy gap.