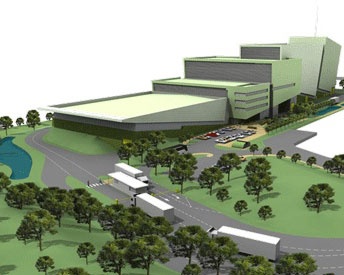 The proposed Javelin Park UBB facility
Community action group GlosVAIN (Gloucestershire Vale Against Incineration) has revealed plans for a bio-mass plant to rival the planned Javelin Park incinerator (right) which was approved by the Department for Communities and Local Government in January.

Plans for the R4C (Resource Recovery, Refining and Recycling Centre), currently earmarked to be built at a site adjacent to Javelin Park, were presented at a public meeting in Stroud on Tuesday (7 July) by Tom Jarman, an engineer and Director of Biocentre, a company specialising in the Mechanical, Biological and Heat (MBHT) treatment of waste.

The proposal is a response to the controversial Javelin Park energy-from-waste facility planned to be built near Haresfield which forms part of Urbaser Balfour Beatty’s (UBB) waste contract with the county council, estimated to be worth around £500 million.

When complete, Javelin Park is expected to divert more than 90 per cent of the county’s household residual waste from landfill, and UBB claims that it will generate enough electricity to power approximately 26,000 homes, while saving the council £150 million in landfill and energy costs over the next 25 years.

But local groups have fought the decision, citing the facility’s ‘dinosaur technology’ and lack of sorting of recyclate and Stroud District Council (SDC) lodged a legal challenge with the High Court over the DCLG’s decision.

The High Court deferred the decision over the challenge several times before rejecting it this week. SDC has said that no further challenge will follow.

However, GlosVain have now announced their plans for the smaller R4C plant that would, it says, have a similar capacity to that of UBB’s facility, recycling around 70 per cent of the waste it collects and turning the rest into biomass for burning.

Jarman stated that the not-for-profit centre would charge a lower gate fee than UBB’s facility, which he hoped would encourage district councils to bypass the county council and make construction of the planned Javelin Park site unfeasible.

A community operating licence has already been secured for the potential plant and Jarman is confident that he will be able to get the financial backing to build it at what he estimates will be one tenth that of the incinerator.

People power project to use waste for ‘community benefit’

Jarman told the meeting: "This is a people power project. We deserve to have something we want and I hope we can use the energy shown by campaigners for something positive.

"Around 95 per cent of waste for the centre could be provided directly by district councils in Gloucestershire without handing it over to the county council first, making the incinerator redundant before construction.

"This is the right thing for district councils to do. The process is real and we have extensive data to show it can be achieved.

"Municipal waste can be processed for community benefit rather than commercial profit, with processing cost per tonne 20 times cheaper than incineration."

Following the High Court's decision to reject SDC's legal challenge, Geoff Wheeler, Leader of the council, said: “Whilst we are extremely disappointed, we still hope that the county council will take a final look at alternatives to the project. Just because it has planning permission, it doesn’t mean that it has to be built.

“The case against adding more incineration capacity in the UK has become stronger and stronger, and Stroud District Council political leaders would welcome a meeting with the county council to discuss better alternative methods of waste treatment.

“The county council’s own ‘Option B’ group even accepted, as recently as November 2014, that if they were starting from scratch, they would not consider the current UBB proposal. “This is not just an issue about planning permission but a matter of not buying what is set to become a white elephant, or as the design of the incinerator reflects, a green armadillo.”

In response to the plans, Councillor Ray Theodoulou, Deputy Leader and Cabinet Member for Finance and Change at Gloucestershire County Council, warned that district councils agreeing to use the R4C centre would be taking on a large financial burden.

He said: "The county council is legally responsible for disposing or treating household waste in a clean and efficient way.

“This proposal would mean that Stroud Council would pay twice to get rid of their waste – which would be a massive burden to council taxpayers in the district.

“If this is something that Stroud wish to pursue it would need to be carefully considered to ensure they are following the law."

Read more about the R4C proposal.

The Waste and Resources Action Programme (WRAP) and the Industry Council for Packaging and the Environment (INCPEN) are working with packaging compliance company Valpak to update the PackFlow material reports in light of the Covid-19 pandemic.

London Circular Economy Week begins this week to share knowledge on how circularity can assist in tackling the climate emergency.

Collection figures for household waste electrical and electronic equipment (WEEE) released today (1 June) by the Environment Agency (EA) for the first quarter of 2020 are slightly ahead of 2020 targets.

Cafes, restaurants and bars are being encouraged by a new campaign to accept customer reusable cups when they reopen.