EU microplastics ban could be in force by 2020

The European Union could be banning a range of microplastics in products by 2020 – but critics say the proposal needs to be tightened up to ensure it will have “real impact”.

The proposed law would restrict the use of intentionally added microplastics under the European regulatory system, REACH, which sets out the chemicals authorised for use in Europe and in what concentrations they are permitted. The European Chemicals Agency (ECHA), which has tabled the new law, is claiming that if adopted, it would prevent an estimated 400,000 tonnes of microplastics from entering the environment over the next 20 years. 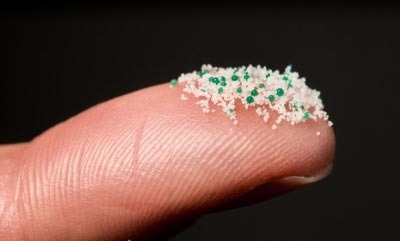 Image: Greenpeace
Microplastics are tiny pieces of plastic less than five millimetres in diameter, and are often found in cosmetics and personal care products – for instance creating shimmer effects in makeup and adding exfoliant properties to face washes and toothpastes. They can also be used in paints, detergents, medical products and elsewhere, meaning the miniscule plastic pieces find their way into the environment from a vast array of everyday sources – often without consumers being fully aware of the impact of their products.

Globally, according to a 2016 study by Eunomia Research and Consulting, primary microplastics make up almost 13 per cent of the 12.2 million tonnes of plastic ending up in the marine environment every year.

Research has shown that microplastics are present across the food chain, often washing down drains into rivers and oceans where they can be eaten by marine creatures and eventually by humans. Less discussed but more common, primary microplastics also concentrate in terrestrial environments, accumulating in sewage sludge that ends up being used as fertiliser. Once in the environment, they are nigh on impossible to remove.

Several EU member states have already introduced their own restrictions on microplastics. In the UK, a ban was introduced in January 2018, which the government described as ‘one of the world’s toughest’. Like many microplastics laws, the UK ban focuses on the microbeads in rinse-off cosmetics like face wash and shower gel – the proposed EU law appears to be much more comprehensive, looking at a wider range of products and industries, including the agricultural and construction sectors.

However, NGOs have warned that the proposed restrictions need to be ‘tightened up’ before they become law. The European Environmental Bureau (EEB) states that the draft law as it stands ‘grants unnecessary delays for most industrial sectors and excludes some biodegradable polymers.’ In addition, it ‘will only restrict one sector when it comes into force, namely cleansing products made by firms that have already pledged to stop using microplastic. Other sectors will be granted 2-6 years before the law takes effect.’

There is also the question of secondary microplastics, stemming from the breakdown of larger pieces of plastic when they enter the environment – other sources of ‘unintentional’ microplastics not covered by the law include fibres released when synthetic fabrics are washed, or particles eroding from car tyres.

Efforts in Europe to tackle plastic pollution are growing, however, with the European Plastics Strategy aiming to address the problem of single-use plastics waste. Measures emerging from that Strategy include proposals to ban a range of disposable plastic items such as drinking straws, cotton buds and cutlery.

Commenting on the microplastics proposal today, Elise Vitali, chemicals policy officer at the EEB, said: “The European Union is rapidly becoming a leader in the global culture shift away from wasteful plastic... We’ll be pushing hard to tighten this proposal to ensure real impact. Tackling the plastics inside products is just the tip of the iceberg when it comes to solving the microplastic blight, but is a necessary step.”

The proposal will go to a public consultation in the summer, before going through a lengthy review and assessment process; after approval, legislation by the European Commission may not come into force until 2021.

Microplastics found in stomachs of organisms living in the deepest part of the Pacific Ocean
By
Sid Hayns-Worthington
| 17 November 2017 |
Add a Comment
Researchers from the University of Newcastle who collected crustacean samples from the depths of the Mariana Trench have found that even the alien depths of the sea cannot escape plastic pollution.

Microplastics now spread even further by flying insects
By
Kate Nicholson
| 19 September 2018 |
Add a Comment
For the first time, insects have been found to retain microplastics when transforming from aquatic larvae into flying adults, enabling previously unexposed creatures and environments to become polluted.

What are you wearing? Hubbub launches new campaign targeting microfibre pollution
By
Gethin Roberts
| 7 June 2018 |
Add a Comment
Hubbub’s campaign #WhatsInMyWash aims to raise awareness of how our choice and treatment of clothing contributes to synthetic materials polluting our oceans.