The UK’s membership of the European Union (EU) has been a ‘crucial factor’ in the shaping of its environmental policy, which has been positive for the UK environment since it joined in the 1970s, according to a report from the Environmental Audit Committee (EAC) released today (19 April).

The EAC’s inquiry on ‘EU and UK Environmental Policy’ was carried out to inform the debate ahead of the referendum on the UK’s membership of the EU, which will take place on Thursday, 23 June. The inquiry’s report claims that the EU has led the UK to improve environmental standards in areas such as air and water pollution and biodiversity.

Following both written and interview evidence provided by members of government and industry, the committee concluded that EU environmental policy development has been a ‘two-way street’. On the one hand, it says, EU membership has given the UK a platform to pursue its environmental objectives internationally, and influence the strategic, long-term direction of policy.

On the other hand, EU membership has ensured that environmental action in the UK has been taken on a faster timetable, and ‘if the UK were free to set its own environmental standards, it would set them at a less stringent level than has been imposed by the EU’.

The report states that the government is broadly satisfied with EU environmental policy. Additionally, the overwhelming majority of witnesses heard believed that the EU has improved the UK’s approach to environmental protection and ensured that the UK environment has been better protected.

The EU has a long history of developing environmental policy to promote the single market, and the overwhelming view of the witnesses was that there were significant benefits to solving some environmental problems multilaterally. The report describes how the UK is regarded as one of the most influential member states in shaping EU environmental international policies, referring to the UK’s role in shaping negotiations at Paris COP21 in December 2015 as an example of this influence.

The inquiry heard concerns that a UK operating outside of the EU would still have to follow some EU environmental legislation, particularly if it wishes to secure preferential access to the single market, but with significantly less ability to influence how it is developed. 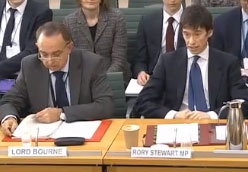 Resources Minister Rory Stewart was the final person to give evidence to the inquiry
Parliamentlive.tv
Ministers told the committee that a vote to leave would trigger a ‘long and tortuous negotiation’, while business representatives felt a leave vote could remove long-term certainty.

The report also points out that relatively little appears to have been done by way of planning in the case of the UK leaving, with Daniel Calleja Crespo, Director General for the Environment at the European Commission, telling the EAC panel that the institution had done no ‘preparatory work on hypothetical issues’. Resources Minister Rory Stewart also commented that no specific contingency plans had been made by the Department for Environment, Food & Rural Affairs (Defra).

Mary Creagh, Labour MP and Chair of the EAC, said: “The UK has cleaned up its act since we were dubbed the ‘dirty man of Europe’ in the seventies. EU environmental laws have played a key part, and mean we bathe on cleaner beaches, drive more fuel-efficient cars and can hold government to account on air pollution.

“Inside the EU we can influence and improve EU environmental law. Our voice at the Paris climate change conference was louder because we were part of a club of 28 countries.

“Environmental problems don’t respect borders. When it comes to protecting our natural environment and dealing with global problems like climate change, the overwhelming evidence is that EU membership has improved the UK’s approach to the environment and ensured that the UK’s environment has been better protected.”

The findings reflect a report published by the Institute for European Environmental Policy (IEEP) in March that stated that Brexit would leave the UK’s environment ‘vulnerable’ and its green business landscape facing uncertainty.

It concludes that Brexit would leave the British environment in ‘a more vulnerable and uncertain position’ due to the UK’s diminished influence in decision-making, and the likelihood of the government lowering standards in areas like pollution and recycling, creating ‘increased uncertainty’ for green businesses.

The report states that while the environment was not accorded much consideration in the early years of the EU’s development, this has ‘changed dramatically’, establishing ‘a comprehensive set of policies’. The IEEP holds up the ‘transformation in waste management’ as one of the EU’s key environmental achievements, pointing to the ‘major increase in recycling rates’ and first steps towards the creation of a more circular economy.

Prior to the introduction of EU law, in particular the Waste Framework Directive and Landfill Directive, the report says, ‘waste management in the UK generally consisted of little more than the collection and landfilling of the waste in often poor facilities’, resulting in both ‘a loss of resources because of low levels of recycling’ and ‘significant pollution from landfill sites’. Laws from Europe, it concludes, have been ‘critical to driving far-reaching improvements in the UK’.