Emma Elston to head up Women of the Year Awards

Emma Elston MBE, Founder and Chief Executive of UK Container Maintenance (UKCM), will be heading up the prestigious Women of the Year Luncheon and Awards for the second year running.

Elston, the Cheshire-based businesswoman and former Business Woman of the year 2012, will feature on the board of directors for the 38th Women of the Year Awards scheduled to go ahead on 16 October 2020, celebrating positive female role models across all areas of society and business. 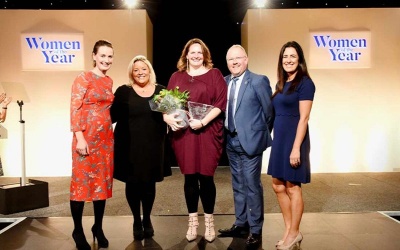 Emma Elston (second from the left) at the 2019 Women of the Year Awards
Elston founded UKCM in 1998 with her husband, repairing waste containers, and the business has now grown to one that employs 65 people and has repaired 1.5 million containers over the years.

Other members of the board of directors include Jenny Campbell, an entrepreneur who has appeared on BBC’s Dragon’s Den, and Zalena Vandrewala, Lawyer at Freeths LLP, Artistic Director and Chief Executive of the Birmingham Hippodrome, Fiona Allan, alongside a new President who is yet to be announced.

Elston said: “It is such an honour to be invited back to join the board of directors for the second year running. This year I am heading up nominations for the Business Woman of the Year category, which invites submissions from entrepreneurs or members of an organisation’s senior management team from all industries and from the private and public sectors.”

“Colleagues, clients, family and friends can send in nominations or candidates can nominate themselves by completing the application form on the Women of the Year website.

“Previous winners of these prestigious titles, have been women of huge talent and skill who are also determined to further raise the profile of their peers to a wider audience and in fact, three of our former winners have gone on to be named in the Honours list to recognise their entrepreneurial success.

“The winner of the Business Woman of the Year title will have made a major contribution to the financial success and performance of an organisation and the judging panel will assess their different skills, abilities, influences and achievements.”

Every year, the Women of the Year Awards support a number of charities across the UK. This year, the chosen charities are The Prince’s Trust: Women Supporting Women and Elle for Elle, a charity donating sanitary products to women refugees across the UK. All proceeds from the awards go to charity.

Taking a dynamic approach to the future of waste collections

Local governments and waste management companies have a wealth of digital technologies at their fingertips. Mark Abbas, Director of Business Development at cloud technology company AMCS, explains how smart approaches can be employed to improve waste collections efficiency and reduce CO2 emissions.

How will cities guarantee a smart future for waste collections?

As the world’s urban population continues to increase, Mark Abbas, Director of Business Development of cloud technology company AMCS, explains how the moving to a smart city model can ensure a sustainable solution to urban waste collections, supporting the health and wellbeing of cities for the future.

North London Waste Authority encourages people to ‘Wise Up To Waste’ and switch to reusable bottles, as new research shows that two-thirds of people say that they now possess one.

Vote for who you think has found the secret ingredient in this year’s Hot 100!

Who has found the recipe for success across the waste and resources world this year? It's time for you to tell us!