Earth Overshoot Day – how can we move the date?

Earth Overshoot Day is here yet again, and earlier than ever: today, 29 July, we have already used up the amount of natural resources that the world can regenerate within a year.

Back in 1971, the team behind the campaign has estimated, the date of Earth Overshoot Day was 21 December. Since then, the date has arrived progressively earlier, with 2019 representing the earliest Overshoot Day we have ever seen.

Despite arguably wider awareness of environmental issues than there has ever been, we are still using resources at an unsustainable rate: 1.75 times faster than the planet’s ecosystems can regenerate what we take from them.

“We have only got one Earth – this is the ultimately defining context for human existence. We can’t use 1.75 without destructive consequences,” commented Mathis Wackernagel, co-inventor of Ecological Footprint accounting and founder of Global Footprint Network, which first launched on Earth Overshoot Day in 2006. 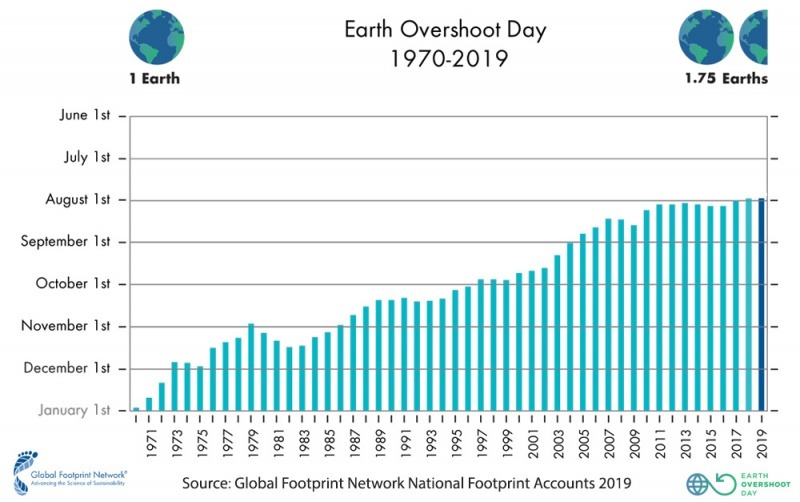 Ecological Footprint accounting is the means by which the network produces the date of Earth Overshoot Day each year – measuring the demand and supply pressures on the natural world. The Ecological Footprint of a population (i.e. the amount of natural resources it consumes and the waste it produces, such as carbon dioxide) is compared with the biocapacity of that region (how fast nature can absorb waste and generate new resources).

According to Global Footprint Network, we are now in ecological deficit, meaning that demand for the resources that the planet can supply has exceeded what it can renew. Falling into ecological deficit every year means it becomes harder and harder to get back to an ecological ‘surplus’, so to speak: every year, the deficit grows and the planet falls further into the red.

Today is World #OvershootDay
A day that sadly happens earlier and earlier each year.
That means that today we’ve globally used up the worlds annual resources. The rest of the year we are stealing from future generations and poorer parts of the world. pic.twitter.com/7fvr5pgxEO

#EarthOvershootDay is not the same in every country. In the UK we surpassed our Overshoot Day on 17 May. That means if the world’s population used resources at the pace of the UK we would have taken more from nature than it can renew in a whole year in just 136 days. pic.twitter.com/4oiDNzL82t

Country-by-country, there are some stand-out offenders. If the world all lived as Qatar did, we would reach the point of deficit by a shocking 11 February. And we would need five Earths if we all consumed resources at the same rate as the USA. The UK, using 2.7 Earths, is in a similar position to much of Europe; however, if all the world’s population lived like India, we would only be using 0.7 Earths’-worth of resources rather than the current 1.75.

Unsurprisingly, a major driver behind the earlier-than-ever Overshoot Day is growing carbon dioxide emissions. Our carbon footprint makes up 60 per cent of our total ecological footprint, according to Global Footprint Network, and in 2018, emissions grew at the fastest rate since 2011, according to the Climate Action Tracker, which has been assessing global climate action since 2009.

The Paris Climate Agreement of 2015 requires countries to cut their emissions to stay ‘well below’ 2ºC of global warming (above pre-industrial levels), and pursuing efforts to limit warming to 1.5°C. According to the Climate Action Tracker, only two countries’ actions (Morocco and The Gambia) are compatible with 1.5°C of warming; most are classed as somewhere on a scale between ‘insufficient’ and ‘critically insufficient’ to keep below even 2°C of warming.

Demand for resources outstrips supply in almost every country

With a report from the International Panel on Climate Change (IPCC) last year saying we have only 11 years to limit global warming before irreversible damage, what can we do? On a national policy level, cutting CO2 emissions from fossil fuel burning by 50 per cent and moving towards clean, renewable forms of energy would move the Earth Overshoot day back by 93 days. A report from Global Footprint Network and Schneider Electric suggests that the date could be reduced by 21 days through decarbonising electricity production and retrofitting existing buildings and industrial processes to make them more energy efficient.

The waste and resources sector could be key to reducing carbon emissions in the UK, according to a report from the Committee on Climate Change. The committee recommended that a ban on biodegradable waste going to landfill would help the UK reach its target of net-zero carbon emissions by 2050, which the government committed to in June. Zero Waste Scotland revealed last year that food waste is the worst offender of all waste streams when it comes to carbon emissions, producing 22 per cent of Scotland’s waste carbon impacts despite only making up five per cent of the country’s total waste.

For individuals, Global Footprint Network has launched a new platform, called #MoveTheDate Solutions, which it hopes will enable people across the world to form a community and share examples of ‘cool, proven, effective approaches to live in balance with our planet.’ Five key areas for solutions are identified: cities (design and management); energy; food (production, distribution and consumption); planet (conserving and regenerating nature); and population (empowering women in order to reduce family sizes).

While the website is still in beta form, there are already 182 projects are available to view across the world, with 42 projects in the UK alone, including zero waste shops, food redistribution networks, rewilding schemes and community renewable energy projects.

You can also check out your own ecological footprint and your personal Overshoot Day by visiting the Footprint Calculator website.

OECD predicts world resource use will double by 2060
By
| 23 October 2018 |
Add a Comment
The world’s consumption of raw materials is set to double by 2060, with devastating environmental consequences, according to a new report from the Organisation for Economic Co-operation and Development.