EAC Chair Mary Creagh
Parliament’s Environmental Audit Committee (EAC) is relaunching its predecessor’s investigation into the impact of disposable drinks packaging on the environment, after the original inquiry was disrupted by the general election.

The new inquiry will look at what actions are being undertaken by industry and government to reduce waste generated by takeaway cups and plastic bottles, and investigate possible solutions.

The initial inquiry received over 100 pieces of evidence, including from LARAC who warned that introducing a deposit-return scheme for plastic bottles in the UK would damage the efficiency of council collections and require a new collection infrastructure to be introduced.

Deposit schemes gain traction after being adopted in Scotland

The issue of plastic bottles has been in the public eye over the past year or so, with several national papers and Sky leading the call for a deposit return scheme to introduce the practice of taking plastic bottles to retailers as a way of raising the recycling rate of plastics.

The new Environment Secretary, Michael Gove MP, has said a DRS would be a “great idea,” but stressed that it is important to ensure the effectiveness of DRS before guaranteeing its implementation.

Despite its popularity with the Scottish government, DRS is not accepted by everyone as the best way of targeting plastic waste. Research from packaging trade association INCPEN and anti-litter charity Keep Scotland Beautiful suggested that behaviour change campaigns would be more effective in reducing litter than incentive schemes like a DRS.

The solution to reducing the environmental impact of takeaway coffee cups is also a divisive one, with various different approaches being trialled for better collection, use reduction or design. 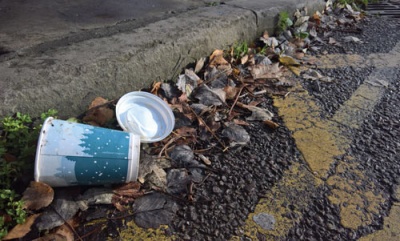 The problem with takeaway cups is that in order to make them, the card shell is fused with polyethylene, a material that cannot be separated out again in standard UK recycling mills. Only two sites in the UK are able to separate the two materials, leading to the poor recycling rate.

While some retailers have trialled incentives for consumers bringing reusable cups for their takeaway coffee, others have backed schemes to improve the separate collection of cups, with environmental charity Hubbub coordinating the Square Mile Challenge to focus on the largest commercial district of London.

It has also been suggested that a levy – similar to the one we currently have on plastic bags – should be introduced in order to deter customers from using takeaway cups. Defra has said that there are no plans to introduce such a levy, though the EAC inquiry may find that such a measure would be beneficial.

As well as announcing the new inquiry, the EAC has also confirmed its membership for this government. Notably, Conservative MP Peter Aldous has not been included despite having a prominent role in the last committee:

More information about the EAC's inquiry into disposable packaging can be found on the committee's website.

The environmental performance of some supermarkets fell outside the UK, analysis reveals

In a letter to Minister Jo Churchill, the association criticised the exclusion of compostable products from new recycling legislation

Surrey food waste campaign asks residents to ‘own their impact’

The initiative follows several successful intervention trials, one yielding a 61.9 per cent increase in food waste caddies out for collection