Parliament’s Environmental Audit Committee (EAC) has launched an inquiry into the impact of China’s recent import ban on 24 types of plastic and paper waste, calling for urgent submissions of evidence from across the industry.

In force since 1 January, the ban covers 24 grades of solid wastes, including mixed papers and post-consumer plastics, and on 1 March this will extend to any other materials exceeding 0.5 per cent contamination levels.

Before the ban, the UK was sending around 494,000 tonnes of plastics and 1.4 million tonnes of recovered paper to China every year; since news of the measures broke in July last year, the UK recycling industry has been in turmoil as companies rush to find other destinations for their waste, whether at home or elsewhere abroad. 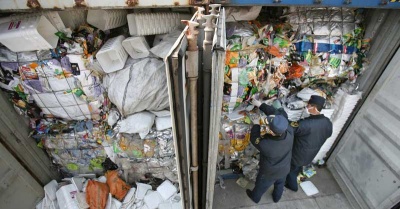 Photo: Guangzhou Customs
Commenting on the call for evidence, EAC Chair Mary Creagh MP said: “The UK has been relying on China to recycle its excess of waste for years, but that market is now drying up. The UK will now have to deal with millions of tonnes of extra plastic and paper waste leading to fears it will be landfilled or incinerated instead of recycled.

“We will examine the environmental impact of the ban, whether the government has made adequate preparations and what the government can do to ensure the UK’s waste is managed sustainably.”

The EAC’s inquiry is inviting submissions on some or all of the following questions:

The EAC will be accepting submissions until Friday 19 January, in advance of a one-off evidence session with government ministers and industry stakeholders.

Aside from canvassing the views of the wider industry, many will be hoping that the inquiry elicits a little more urgency from the Department for the Environment, Food and Rural Affairs (Defra) than that currently shown.

In November 2017, Environment Secretary Michael Gove admitted to the EAC that he had not given the issue “sufficient thought” but that he was certain the UK had the capacity to process extra material. More recently, Gove acknowledged in a written statement that the ban could ‘cause some issues in the short term’ for the country’s recycling.

Gove giving evidence to the EAC in November
Image: Parliament.tv
‘There is evidence that some operators have already been finding alternative export markets in response to the Chinese restrictions’, Gove continued in his statement to the House of Commons. ‘Data for the third quarter of last year showed increases in exports of plastics to Turkey, Taiwan, Vietnam and Malaysia and increases in exports of paper to Turkey, Taiwan and Vietnam.’

While certain businesses have moved their exports to pastures new, above all to alternative South East Asian destinations such as Vietnam, Indonesia and Thailand,  Simon Ellin, Chief Executive of the Recycling Association, commented earlier this month that some smaller companies have struggled to find markets for excess materials: “You can already see the impact if you walk round some of our members’ yards. Plastic is building up and if you were to go around those yards in a couple of months’ time the situation would be even worse.”

Ellin stressed the importance of improving the quality of recyclate, given that foreign markets willing to accept the standard China has rejected are now in higher demand. “The UK needs to make further improvements to quality so that we are the preferred suppliers for new markets. This will involve supply chain responsibility, starting at the design stage, through to retailers, councils and the public.

“[W]e need guidance, legislation and investment from government and a coherent, innovative and joined up waste and recycling policy that embraces the Chinese ban and uses it as an opportunity to overhaul our current system and invest at home.”

The need for development of domestic markets for secondary materials has been raised by a number of industry leaders, including Ray Georgeson, head of the Resource Association, who called for “bold and radical” leadership from the government on the issue of plastic waste specifically.”

Estimated 350k tonnes of UK plastic waste could go unrecycled as a result of China ban
By
Lidia Creech
| 15 December 2017 |
Add a Comment
UK-based Vanden Recycling has calculated that alternative destinations for waste exports will not be able to make up the shortfall in capacity resulting from China’s plan to ban waste imports in 2018.

Gove admits to not giving 'sufficient thought' to imminent China ban
By
Edward Perchard
| 1 November 2017 |
Add a Comment
Environment Secretary Michael Gove says he hasn't given enough thought to the Chinese ban on waste imports that could rock the UK's recycling industry, despite it coming into action in two months' time.

The UK government must take the lead in creating domestic secondary markets for recyclable plastic waste as China places bans the import of 24 grades of solid waste, says the Resource Association.

China’s ban on the import 24 grades of solid waste has been known to the UK recycling industry since July of last year, so how have the major companies been preparing for the disruptive new policy?

Chinese customs authorities have intercepted over 500,000 tonnes of illegal waste under the ‘Blue Sky 2020’ campaign and plan to continue the crackdown on illicit domestic and foreign waste imports.

Industry figures have told MPs the Chinese ban on waste imports is ‘the biggest problem the UK recycling industry has ever faced’ and have called for domestic secondary market development to counteract its effects.