Does Wetherspoon’s ban signal the end for plastic straws?

Drinking your gin and tonic through a straw - or two - may be on the way out, as JD Wetherspoon has become the latest, and biggest, business to go plastic free. The chain is promising to have only biodegradable paper straws in every one of its pubs from January 2018, and has stopped automatically putting straws in drinks with immediate effect. 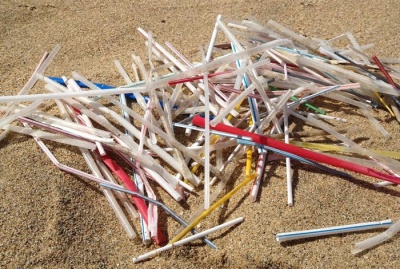 Image: thelastplasticstraw.org
According to John Hutson, the company’s Chief Executive, the change is “part of an overall commitment from the company to reduce the amount of non-recyclable waste produced”. Wetherspoon already has a dedicated recycling centre for some of its waste, and this claim leads the company closer to its aim of creating a circular economy.

The amount of throwaway plastics we use has risen continually across the world over the previous two decades, and straws are some of the least conspicuous, yet most harmful, culprits. Drinking straws and stirrers were the fifth most collected item in the 2016 International Coastal Cleanup.

Many of us have become accustomed to drinking through them without connecting this act to the vast amounts of plastic ending up in our oceans: 12.2 million tonnes every year, according to Eunomia Research & Consulting.

500 million straws are used daily in North America alone, campaign group Strawless Ocean claims, and the plastic takes hundreds of years to decompose, leaching dangerous chemicals into the environment. Further to this, straws have been seen to pierce and injure sea life such as turtles.

Wetherspoon’s pledge will be welcomed by groups such as the Plastic Pollution Coalition, whose Last Plastic Straw project encourages consumers to boycott single use plastic and refuse a straw when buying a drink.

And while Wetherspoon has the highest profile of all establishments to make the switch to biodegradable straws, this is not a new trend. Earlier this year, All Bar One also announced a plan to phase out single use straws in all 52 locations and replace them with sustainable alternatives (below).

All Bar One found this summer it used around 13,000 straws a day, purchasing over 4.7 million every year to stock its bars. In the first three weeks after launching its #StrawsSuck pledge in June, the chain said it saved 91,000 straws from going into landfill.

In a similar shunning of small plastic things, action has also been taken to phase out the plastic cotton bud: all major UK retailers have pledged to sell only biodegradable buds by the end of 2017, after Bristol-based City to Sea’s #SwitchtheStick campaign saw over 150,000 people petition supermarkets to this end.

Straw wars
By Resource |
4 April 2012 |
Add a Comment
‘A long time ago in a galaxy...’ well, here, people drank directly from cups without the need of a plastic straw. London restaurants are now uniting to eradicate this ‘unnecessary’ practice.