Do community sharing projects like the Library of Things represent the future of stuff? 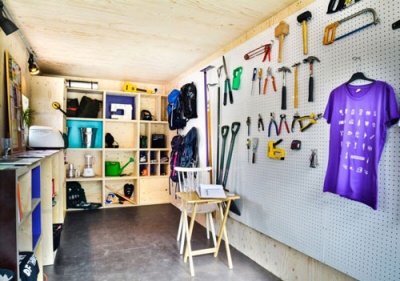 The Library of Things lends out useful but infrequently used items like power tools and camping gear
Photo: Sebastian Wood
As London’s first Library of Things celebrates its first birthday, could community schemes sharing expensive and rarely-used equipment offer a glimpse into the future of how we handle household items?

The sharing economy, the concept of leasing products and services rather than owning them, has picked up a lot of followers in recent years, and for many of the things that we find ourselves pulling out of the cupboards on empty Saturday mornings it seems like an obvious solution to unnecessary waste.

When you consider that the average power drill is used for around 13 minutes over the course of its lifetime, it becomes clear how incredibly inefficiently the materials, energy and manpower used to create products like power tools (not to mention the money used to buy them and space used to store them) are used.

In fact, a study by the Waste & Resources Action Programme (WRAP) found that 91 per cent of a household drill’s environmental impact occurs in the materials and processing phase, and just two per cent is caused by its use. While there are clearly benefits for improving design so that products like drills last longer (see Resource’s feature on the potential of design), another way of reducing their environmental impact is to reduce the need for so many to be created (millions are sold in the UK every year) by sharing them.

And it’s not just drills and power tools. Think of all of the things in your home that you bought for a particular project or use and are now taking up room under the stairs or acting as expensive clothes horses.

The Library of Things

London’s first Library of Things opened one year ago, lending out useful items from a custom-made shipping container placed in a South London car park. Run by a team of local volunteers in exchange for free use of the library’s items, the community project has amassed over 500 members, who register for free and pay between 50p and £15 to rent the library’s items for up to seven days.

The Library of Things caters for those who need temporary access to items that rarely, if ever, come out of the cupboard. It passed 1,000 ‘lends’ in April, with the most popular items being carpet cleaners, drills, sewing machines and large speakers.

Among its 346 items, the Library of Things also has a number of summery items to help those taking their annual holiday, hosting events or simply making the most of the limited sun.

Dan Hart, who recently became the library’s 513th member, borrowed a couple of barbecues, some table tennis sets and catering equipment for a street party in Brixton last week, with tents, full golf sets, body boards and a specialised jerk chicken barbecue among the other items available for the hot summer months. “It’s amazing – we can borrow this stuff for the weekend, rather than buying it for over £200 and then paying to store it,” said Hart. 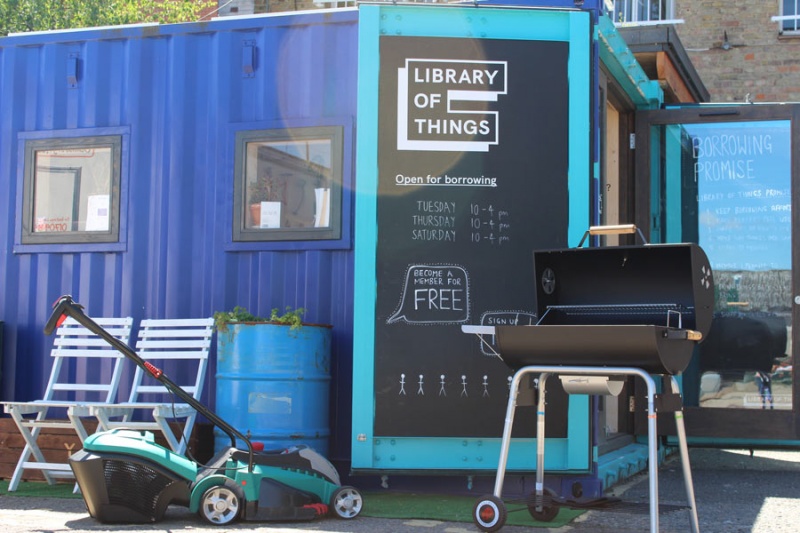 Oliver Kirkman, who helps out at the library as a volunteer, added: “One of my highlights has been helping a member and his daughter pick the things they wanted for her first camping trip. Another moment was seeing the kid-like grin on two grown men’s faces as they walked out with the Nintendo 64.”

The Library of Things also wanted to help its customers learn new skills and act as a social hub. Local woodworker Ben Willis led workshops for 15 people, showing them how to make dinner tables using surplus wood donated by Lambeth cemeteries, while Suze Jones invited her neighbours to the Library for a sociable evening of mending.

Rebecca Trevalyan, Co-Founder of the Library of Things alongside Emma Shaw and Sophia Wyatt, says that the project hopes to continue working with product manufacturers so that it can ensure the supply of high-quality, well-maintained items without the overheads of purchasing them especially for the scheme.

The idea seems like one that should be taking off, and the World Economic Forum predicts that by 2030 all products will have become services. But despite the no-brainer that the sharing economy seems to present, saving users money through a sustainable and community-driven solution, some doubts remain.

Environmental think tank Green Alliance reported this month that workshops looking at possible answers to resource efficiency issues found a reticence to use sharing services due to the time hassle of arranging it and trusting other people to use the products properly and hygienically.

However, the workshops also revealed that in practice these fears might not be realised, giving the example of a community fridge placed in Swadlincote last year. The fridge, part of the Sainsbury’s ‘Waste less, Save more’ campaign, was filled with surplus food left by local residents and traders which was then free for anyone to take.

Though the Green Alliance workshops noted that many were initially put off by worries of hygiene and misuse, the fridge was so well used that a second one was then set up.

Community fridges are now being set up across the country, with a crowd-funding campaign raising more than £2,000 to pay for ‘The People’s Fridge’ in Brixton.

The fridge, which is unmanned but checked twice a day, was set up after WRAP estimated that each person in the borough of Lambeth wastes £9 of food a day. Residents can leave food that is still in its packaging or entirely uneaten fresh produce and cannot leave open milk, or raw meat and fish.

More information about the Library of Things can be found on its website.

Circular cities are doing it for themselves
By
Edward Perchard for the North London Waste Authority
| 21 March 2017 |
Add a Comment
With European guidance still going through the bureaucratic process and national policy seemingly well down the pecking order, local and regional authorities can take the reins and steer their areas into a more circular way of living.

Fair sharing?
By
Libby Peake
| 16 November 2015 |
Add a Comment
The sharing economy is growing exponentially, but what, exactly, is it growing into? Libby Peake investigates.

Can community refill schemes like Bristol's help solve plastic waste crisis?
By
Katy Carter
| 5 May 2017 |
Add a Comment
Community water refill schemes could be a viable approach for tackling plastic pollution. Bristol is setting an example for other cities with a new drinking fountain in its city centre.

Swadlincote: The UK's first 'Food Waste Town'
By Resource |
2 September 2016 |
Add a Comment
Since January this year, the market town of Swadlincote has been testing out ideas for preventing household food waste, with £1 million in investment from Sainsbury’s. Libby Peake visits the town to see how it’s all going

The Restart Project: Repair in the community
By Resource |
7 March 2017 |
Add a Comment
The Restart Project is bringing the circular economy to the grass roots, with community repair events helping people fix their technology and build skills, confidence and networks.