Trials of a four-weekly residual bin collection in the Welsh county of Conwy have increased recycling rates by 17 per cent, the council has revealed, almost triple the rise of homes receiving three-weekly collections.

Conwy, which currently recycles 63 per cent of its municipal waste, introduced three-weekly refuse collections in September 2016, with just over 10,000 homes (around a fifth of the county) taking part in a trial of a four-weekly collection, after councillors decided that a complete switch to monthly collections was ‘a bridge too far’.

However, a council update on the results of the trial so far suggest that the new system has brought about savings in the cost of waste disposal and has generated extra income from recycling, contributing to meeting the council’s wider savings commitments.

Commenting on the results, Jon Eastwood, Waste Manager at Conwy Council said: “In a little under nine months, an additional 900 tonnes of material was placed out to be recycled at the kerbside using the Trolibocs and 2,900 tonnes less waste was collected from refuse wheelie bins in comparison to over the same period last year.

The reduced frequency of residual waste collections have been supplemented with weekly collections of paper, cardboard, cans, glass, drinks cartons, batteries, food waste and nappies, with fortnightly collections for garden waste, textiles and small electrical items. The aim of restricting residual waste is to push more recyclable material into the recycling stream, where waste is much cheaper to dispose of, and often provides an income for the council. 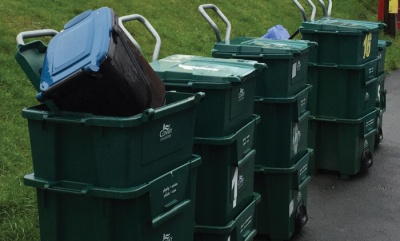 The decision to make the change came after a year long review by Conwy County Borough Council of every household in Conwy, to which 11,000 households responded, which revealed that more than half of all items thrown away into black wheelie bins for refuse collection could have been recycled, at a cost of £1.6 million to the council every year.

In addition, residents are able to request a separate clinical waste collection and extra recycling containers, households of six or more people can obtain an extra refuse bin and assisted collection services are available for residents who require assistance moving their containers.

The council says it is encouraged that residents appear to be embracing the ‘waste minimisation challenge’, with the general reaction being ‘extremely positive’.

Despite initial fears from residents, there has been no increase in vermin, with food waste largely being disposed of properly through the weekly collection service, and no increase in fly tipping, though authorities remain vigilant.

The collection changes and trial will be reviewed and evaluated in full in the autumn.

To find out more about the changes, visit the Conwy waste and recycling webpage. The report presented to the council ahead of the changes can be read on the Conwy County Borough Council website.

What would it take to recycle 80 per cent?
By
Resource
| 6 June 2017 |
Add a Comment
With Wales' recycling rates racing ahead of England's, is 80 per cent recycling finally an achievable goal for the country?

Existing staff shortages are being exacerbated by the variant’s impact, says the Local Government Association